Tom Abdenour in the community!  Teaching kids about eating healthy (via GoldenStateWarriors)

The number of "great" Warriors to be remembered as "great Warriors" is pretty slim.  The number of retired numbers that adorn the Oracle Arena are pretty limited.  With the way things are going right now, we wonder if there will ever be another Warrior that wants to be retired as one -- or a player that even comes close to having the achievements worthy of nomiation.

I argue that that next person is actually sitting on the Warriors bench right now.

No, I'm not talking about the potential of Anthony Randolph to be a superstar, nor am I suggesting anything about Stephen Curry's future with the Warriors.  This dude has been with the Warriors 21 years and counting.

I'm talking about Tom Abdenour.  The Warriors' athletic trainer has seen it all and stuck with the organization through thick and thin.  This is more than we can say about former captain, Stephen Jackson.

This season, the Warriors need Abdenour to perform at his best.  Last season was quite an "off-season" given that various Warriors players missed a combined 200+ games last season.  What can we expect from him this year?  Hope he's got his rolls of tape ready.

Before we get into the predictions for this year, let us check out a few of his amazing accomplishment worthy of induction into the NBA hall-of-fame.  Heck, he's already in the National Athletic Trainers Association hall-of-fame.

I don't want to highlight everything about his professional career, which is accessible here.  But I will note a few important things.

In 2005, he was awarded National Athletic Trainers Association's Tim Kerin Award For Excellence In Athletic Training.  That year, the "star" Warrior players only missed about 20 games total with Mike Dunleavy missing only 3 games!  In 1990, he received the NBA Trainer of the Year award.  The run and gun warriors, led by Run TMC, clearly demonstrated his training-excellence.

Aside from that, Abdenour has been the ONLY Warrior to represent the United States in international play, getting a gold medal, too (Summer 2000 in Sydney, Australia among others).

He has also been featured in Sports Illustrated,  but not as a swimsuit model.

What hasn't this man done? 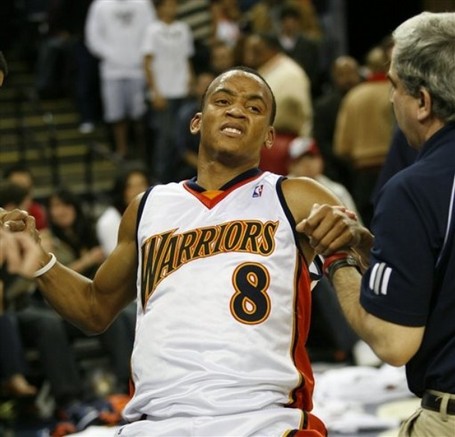 But from the looks of things, the Warriors are running smoothly.  They've traded in physical problems for emotional problems.  CJ Watson is back in the line-up after reportedly potentially being out longer than he was.  Ellis has shown off some of that speed he once had, along with some other tricks up his sleeve to keep defenses ankles broken.

I'm expecting the Warriors to go as far as Abdenour is willing to take them.  The spotlight is on him, will he be able to take them to the promised land?  By promised land, I mean, at least 70 games played by all the starters.

What are your predictions for Mr. Abdenour?