SonicsGate Now Playing in a Web Browser Near You

Share All sharing options for: SonicsGate Now Playing in a Web Browser Near You

Over here in Dubs land we have Chris Cohan of Recall Cohan fame (true Dubs heads know the reference to the classic online destination), Robert Rowell's utter incompetence, Moped Gate, "Captain" Jack being a royal Jack -, but nothing, nothing compares to what Seattle SuperSonics fans (shout out to GSoMer mcwalter44) have endured recently. I want to give the Sonics faithful major props for banding together and putting together the SonicsGate documentary. 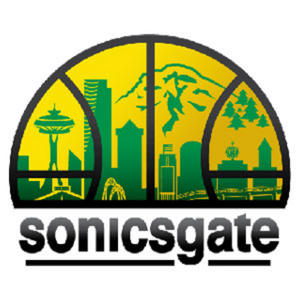 Jump for the entire 2 hours of the Sonicsgate in streaming video and some good words from our FTB buddy M. Meshery in The Great Basketball Swindle: Sonicsgate Documentary tells all.

This documentary, released in its entirety online (watch it here), does an amazing job of capturing the history of the team and its place in the community. It also illustrates everything that's wrong with the "business" of basketball. It could be an addendum to Michael Moore's new film, "Capitalism, A Love Story," as in "Capitalism, A Love Story about Basketball." What's sad is that we as fans simply shrug at the honesty of players when they say, "hey, it's a business," as if that's the only rational for why they've been traded, or why they're leaving a team for free agency or why they're endorsing such and such product. At least they're being honest I guess. What's worse is that it's often the owners that give lip service to their business being a part of the community, a part of the public trust, something the fans can own etc. etc. As Clay Bennet might say, "Horseshit!" As all of us Warriors fans know, the interest of the fans or the community come last on the list for owners and players. Greed and egos trump all.

If you are a Warriors fan, you might not want to watch this movie unless you're prepared to start throwing blunt objects at your computer screen. There are too many paralels here of how a team can be dismantled by terrible self-interested management. Hey, at least we know that what happened to The Sonics could never happen here, right? Or maybe it could for the right price. Uh, I guess San Jose isn't that far away.

Here's my thoughts on the Sonics Gate from the very last Seattle SuperSonics game which just happened to be the last game of the 2007-2008 Golden State Warriors season which FJ and I were at- Recap: Warriors 121, SEATTLE SuperSonics 126- Too Hot for TV! That's That.

Here's my take on the Sonics and Seattle situation. You have a passionate hoops fan base that's getting played. The city already used public money to renovate the stadium in the mid 90's. Now some greedy billionaire owners are complaining that the taxpayers won't shell out their own hard earned dollars to help them build more corporate (read: less than casual fans) targeted luxury boxes so they can get richer. You know there are more important things in this world than continuing to line up billionaire's pockets with more green like improving public school education, public transportation, pollution, and other other public services. Disgusting. Capitalism and fan exploitation at it's worst. Let's hope Warriors owner Chris Cohan is at least classy enough not to go that route in a few years.

By the way Howard Schultz- nice little publicity stunt. Too bad you're probably going to lose the case and your efforts seem just a little bit disingenuous seeing as how you sold the team to a group of Oklahoma City investors in the first place.

Some far superior insights from around the web:

SonicsGate in SD for those of you on slower connections:

Shout out to the two stand-up fan blogs that the Seattle SuperSonics were/ are blessed to have: