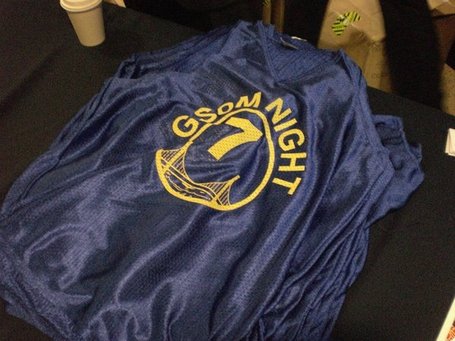 To say that the post game free throw contest was a success is an understatement. It couldn't have gone any better. People lined up on time, the Warriors staff made things happen smoothly and efficiently, and lastly, everyone had a great time. How many other times will you get to step on the court and take a shot?

But this was a contest and there could only be one winner. The prize? Courtside seats to the upcoming game against the Minnesota Timberwolves. Yes, courtside seats - a $500 value - for making your free throws. Chris Murphy of the Warriors seriously hooked it up.

Before I get into how it all went down, I'd like to give a special thank you to Chris Murphy for making it all happen. If the Warriors ran their organization like Chris runs the group ticket sales, we'd be championship contenders. The coordination involved with pulling this off is no joke. If you enjoyed the free throw contest, let Chris know your appreciation in the comments.

The instructions for the post game free throw contest were to line up outside of a certain section and wait for the Warriors staff to direct you where to go. I thought it would be 150-200 people. Boy was I wrong because after taking some pictures after the game and heading down to that section I was met with a LONG line. It must have stretched 1/3 of the way around the arena. 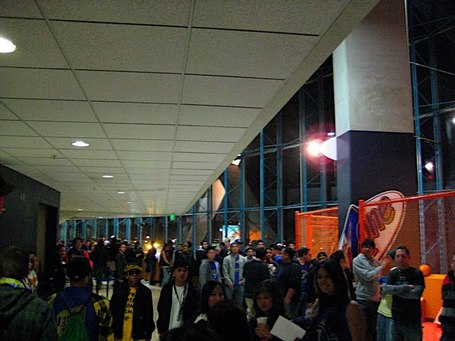 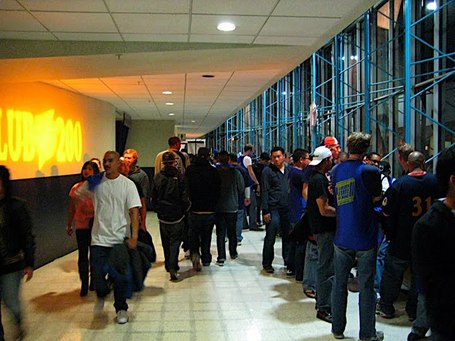 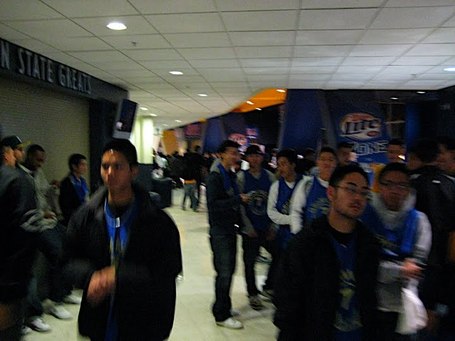 When they finally let everyone downstairs, the line stretched from half court, up out of the lower bowl, and halfway back up the stairs to the upper bowl. The GSOM community was an impressive sight to see. 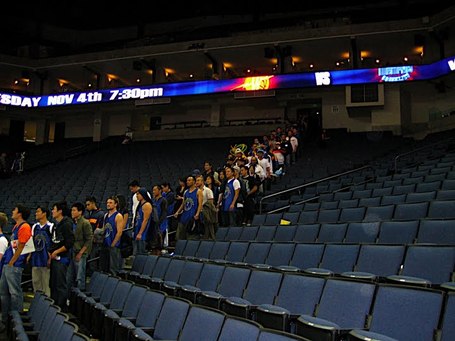 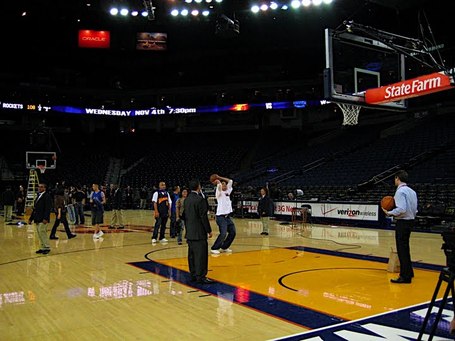 Shooting free throws in the first round 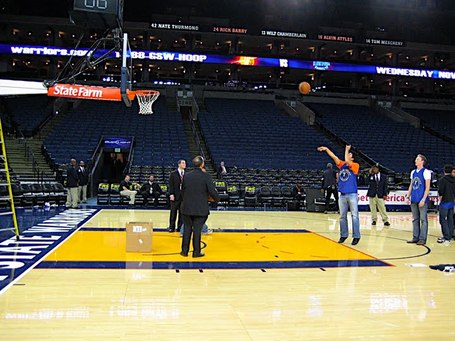 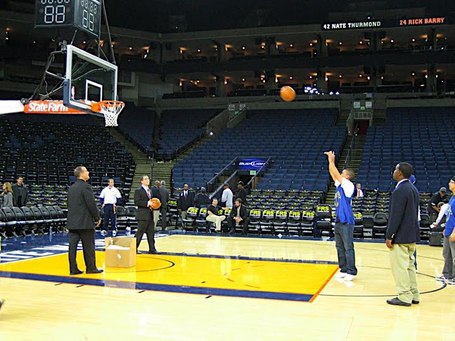 As for me, I choked on the first free throw. It was straight, but short.
It hit the front iron and I was left to walk off the court with my head down.

The 2nd Round Begins
All that was left for the second round stretched from half court to the baseline. Clearly, some people need to practice free throws. 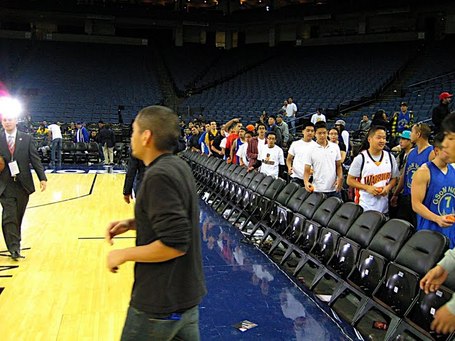 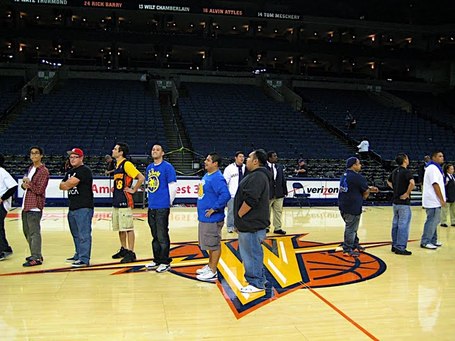 3rd Round
The 2nd round rules were the exact same as the first round. You had to make 2 free throws to move on. If you missed the first you were done and if you made the first and missed the second, you were done. No mercy here. Basically, this whittled the field of 400 down to just 7 for the 3rd round. There was a nervous excitement in the air as everyone knew what was on the line - courtside tickets. 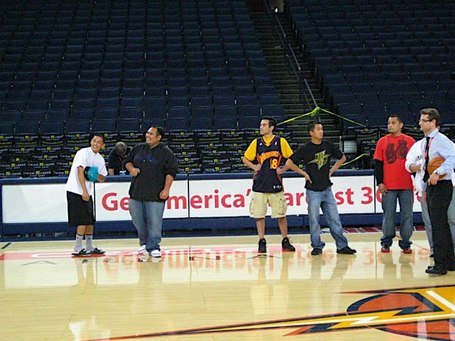 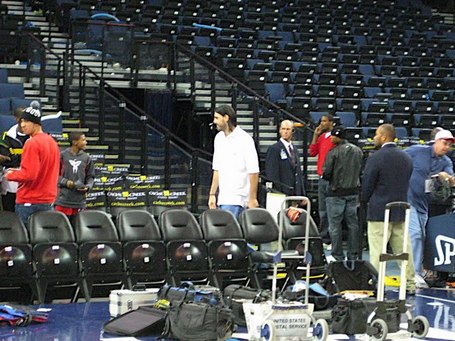 Even Luis Scola came to watch the 3rd round

Final Round
The 3rd round knocked out all but 3 shooters. One of them, Pete P, even had his own cheering section. (Update: turns out they were yelling "P!") I figured his name was Pete P since they kept yelling it before and after his shots. PETE! He had about 20 loud supporters hoping he'd make his shot. 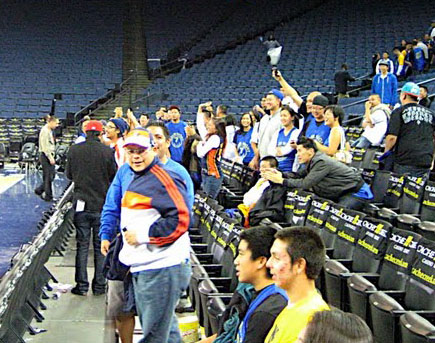 It helps to have the crowd on your side.

The first 2 of the 3 finalists missed. So it was down to one shot for the courtside tickets. Miss and the final 3 get another chance. Make it and he's sitting courtside to watch the Warriors take on the Twolves. 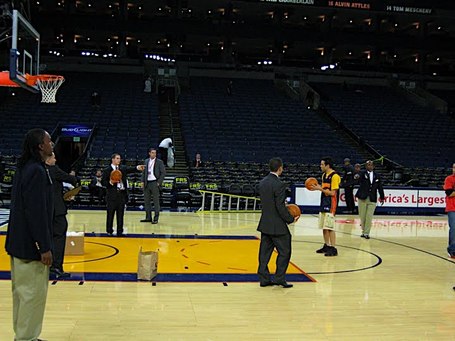 And with ice in his veins, P sets up to take the shot

and the crowd goes wild 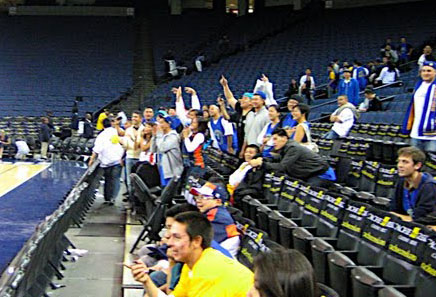 He takes home the prize, 2 courtside tickets to the game against the Minnesota Timberwolves, and he also takes home bragging rights as the winner of the GSOM Night Free Throw Contest. Congratulations! A well deserved win. 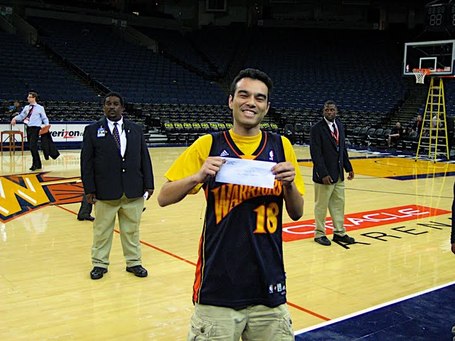 Thanks to everyone who participated in the contest for making this happen. All of these GSOM Nights could not happen without you guys showing up and making it a fun night out.

Look out for news on the next GSOM Night where we hope to be able to do something special following the game just like this one.