There is always a chance that one of these players will step up and contribute.

But I wouldn't count on it.

Another number: $11,382,017.50. That's how much salary the Warriors can bring back by parting with this trio in an even trade. It is not the sort of figure that can open up space for Bosh or Stoudemire nor should anyone expect their respective teams to simply hand over either of the talented big men without some real assets coming back; were it merely about clearing cap room for PHO or TOR, they could just as easily wait and let their guys walk. But its a move in the right direction and the sort of pieces that might allow the Warriors to upgrade Ellis or Biedrins for a more expensive (and presumably better) player.

Will this happen? That is an unknown, but Trader-Don has never been afraid of pushing for a big deal and reshaping his team. Once Al Harrington's contract was exchanged for Jamal Crawford's, adding another year of big dollar payments for far less productive, after a fit of insanity extended Stephen Jackson, making him infinitely more difficult to deal, it seemed unlikely that the Warriors could do more than dream about that kind of deal. But now, so long as they do not actually wander onto the court during a regulation game, Acie, Speedy and Devean have the potential to help this club, simply by continuing to cash their absurdly large (by anything but professional basketball standards) paychecks.

Of course, where the Warriors are concerned, worst case scenario being not altogether improbable, there is a possibility that any or all of these players could wind up playing. There are rumors that Law was once one of Nellie's favorites, so much so that he was willing to offer up a younger, less proven Monta Ellis for Law's draft rights. This should be discounted for the most part. Two years in the NBA provides more data indicating that Law was not so valuable. He has not shown that he is able to get a shot off, though he does appear to take good care of the ball. Still his passing does not seem to be sufficient to overcome the anemic individual offense. Indeed the Hawks were point-guard poor when they took Law, a "need" pick at #11 in the 2007 draft. While it is still possible that a new environment will ignite his play, at 24, his upside would seem to be somewhat limited. Nonetheless, Nellie may still be interested in Law-the-player instead of merely Law-the-millionaire-who-can-make-a-deal-work-with-the-convoluted-rules-of-the-NBA-salary-cap. We can only hope that the pre-season provides enough enough time for Warriors' brass to make this decision.

Speedy Claxton similarly has never been much of a shooter, but as his name indicates, when healthy he can move in a transition offense. On those rare days, he was once a blur. If history is any indication, he won't be healthy, and when healthy, he too is a woefully inefficient scorer with adequate but none too amazing passing numbers. Claxton's size makes him a defensive liability if he cannot pester the ball-handler.

In contrast, George once had a reputation as a solid defender. One fears that he may be the "beef" GM Larry Riley so desired, but an inadequate rebounder and a poor shooter whose offense consists of a three point shot that should not inspire fear in opposing defenses, one hopes that George was merely a free $1.6million dollar trade matching coupon, as his salary is being paid by the Raptors. Maybe he can instill a bit of defensive pride in practice that will carry over into games. Maybe. 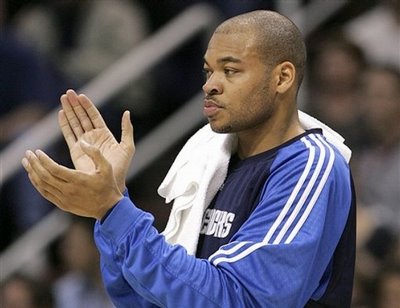