And now we come to the new kid on the block. One thing we have to give this Warriors organization is their ability to pick up raw talent and allow it to blossom (before trading it away). Unfortunately, our current batch of raw talent hasn't yet learned to play cohesively enough together to form any kind of consistency, but it's tough to argue that players like Ellis, Biedrins, and Randolph haven't had the room to discover themselves.

As I was talking with Atma the other day, I shared a concern I've had with Nellie in recent years. What if Nellie sees a potential successful season in front of him without letting Curry stretch his wings? Atma brought up some solid points in this realm. Historically, if Nellie hasn't let a rookie or new addition to the roster breathe (POB, Diogu), they haven't really moved on elsewhere in the league to excel. If the talent is there, Nellie has and will let them cultivate their skill on the Arena floor.

That being said, we're going to be seeing a lot of Curry at the Arena this year. 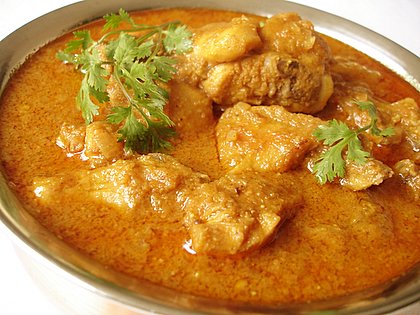 Wrong Curry. But equally as exciting!

Make the jump and let's check out some of the reasons why this kid might change the course of this already tumultuous season.

Okay. Before we begin, I would be remiss to not mention that if you have any percentage of South Asian blood in you, or if you just happen to like Indian food, go out and buy a Curry jersey. Long after this kid starts to average 25 ppg and goes to another team for $20 more because Rowell refuses to match the offer, a jersey that says "Curry" on the back will bring you endless joy. Also, discounts among Indian restaurants across the greater Bay Area. It's really the gift that keeps on giving.

Now - if you got excited by that, check this out:

No doubt. It's always tough to focus on a college phenom and predict his success in the bigs, but so far all signs point to yes. According to Marcus Thompson at the San Jose Mercury:

It's too early, by most accounts, to give him a thorough analysis. But rookie guard Stephen Curry has members of the Warriors organization feeling good about his development.

Let's look at reality though. Despite Monta being out of line with his claims that he can't play with Curry in the backcourt, having the two of these guys together really can lead to us getting bumped and bruised around. What happens when the Warriors are put into this position? Historically, three point shot after shot after shot. Morrow aside, we haven't proved to be a team good enough to rest our game on the long bomb.

Curry's real value as a point is going to be getting the rock to our ever growing big guys. I predict that Biedrins, Randolph, Turiaf, and now, Mikki Moore will eventually come to enjoy a player of this nature who can has the ability to develop his passing as well as the rest of his game.

Not that anyone in the Warriors organization is going to mind if he takes a shot or two.

Despite the rough introduction to the NBA, Curry doesn't seem to be losing confidence. He's usually running the point when he's in the game, and the Warriors have encouraged him to continue being aggressive looking for his shot, and he's followed orders.

But at the end of the day, year 1 in this league is exactly what it is. Year 1. Right now our very own organization isn't even sure how they want to use his talents, which will make it extremely tough to cultivate his game in any sort of focused direction. Perhaps this kind of breathing room is needed, however. Am I expecting big things out of this kid? Yes. I am. Am I expecting it in the first 30 games of the year? No. But it sure would be nice!

Will this be the year of Curry? DISCUSS!