Editor's Note: The bad news: the Warriors kicked off their ROAD TRIP just straight up trippin'.

The good news: Feltbot of the mighty Feltbot's Warriors Blog has a super fly guest recap for all you fine golden folks!

I'll pass the mic to my astute colleague for some razor sharp insights on the Dub Drama tonight in Indy. 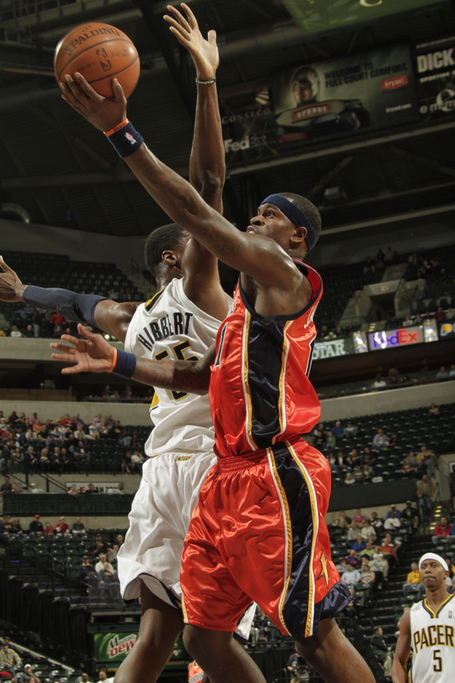 One game after Canis Hoopus, the SB Nation Wolves blogger, disgustedly began his recap in the third quarter, I was tempted to begin mine in the first. Because this game was over the moment Private Stephen Jackson set foot on the court. Gone was the player who got 15 assists in the Wolves game looking to get his teammates involved. In his place was the Stephen Jackson that drives Warriors fans batty, the Jackson who pounds the ball interminably before hoisting long jumpers, and who takes the ball to trouble.

Even more disturbing was Jack's defense. When I saw him give a matador Ole to TJ Ford on a drive to the basket, I sensed something was up. Nellie gave him a quick hook after 6 minutes, and left him on the bench the rest of the half. And that finished the Warriors. They were already being forced to double-team Roy Hibbert in the paint, leaving open threes for the Pacers' perimeter players. When Danny Granger became unguardable as well, this game was hopeless.

Jack did return in the second half, and did play better, looking to set up his teammates, but by that point the damage had been done. When the Pacers relaxed in the fourth quarter and let the Warriors' second unit close the gap to single digits, Nellie brought Monta back but left Jack planted on the pine. Granger went for 31 points and 16 rebounds in a game that was never really close.

I have been one of Jack's more vocal defenders over the years. Less so this year, of course, but even this year I felt he was still making positive contributions on the court. Until this game. This is the first game I've seen where Jack simply didn't show up. Don Nelson actually stood up for him after the game, stating that he had a back injury, and that he wasn't able to move well as a result. Hmm... would that be a Harringtoniliac strain or a slipped Harringtonisc, Don? I have a feeling the Bay Area sportswriters are going to be probing Jack's sore back with sharp pens.

There are of course a few more things to blame for this loss:

Anything positive to take away from this game? I find two things: the play of Corey Maggette and Anthony Randolph.

This kind of heart is one of the things that has made Stephen Jackson so invaluable to the Warriors in the past. It is inspiring. But now that Private Jackson has a foot and three toes out the door, the Warriors are desperately lacking for it. Its good to know that they have at least one player on the roster who is willing to step into that void.

Who is your Warrior Wonder for tonight's game?