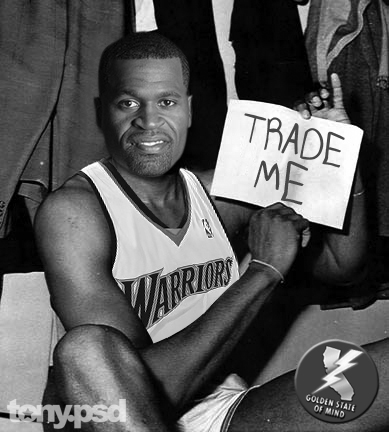 I gotta be honest here - I'm a bit offended. I checked up the preview on ESPN and the Accurscore Projection (whatever the heck that means) has us at a 37% of victory.

Let's face the facts. Both of these teams are god awful, it's going to hurt to watch, and it's not even worth my time to toss down some fun facts or make some witty jokes.

Sure there are questions to be asked.

Where is Darko Milicic? Will Al Harrington have a monster game against us to show up his old team? Who's better at Run and Gun - D'Antoni or Nelson? Are we going to trade Stephen Jackson for Eddy Curry? Will LeBron end up with the Knicks?

Realistically - who cares? This game's gonna hurt to watch.

BUT I did dig up some good footage one on classic Warriors-Knicks game...

If only we still had John Starks...

How many minutes will SJax play tonight?