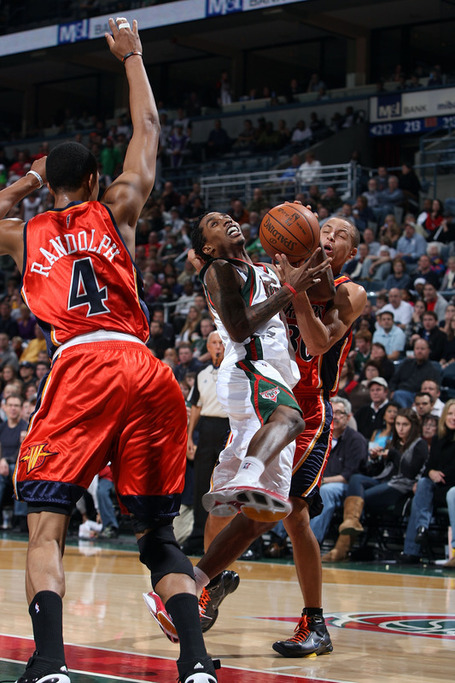 The Warriors contribution to the development and fandom of the NBA industry should not be overlooked.  The number of D-league success stories that have passed through the Warriors system is a testament to the NBA's attempt at creating more career opportunities for players.  The number of stars that have began their careers at Golden State shows how much the Warriors can -- at times -- evaluate talent.  But more importantly, without the Warriors, we wouldn't have exciting games like last night, watching young rookies transition into rising stars in a matter of 48 minutes.  The Warriors are the reason why the "NBA is Fantastic!"

Even though the Warriors lost this game, there is much to love about what we saw from last night...

The most obvious thing to love: Brandon Jennings second "debut" in two games.  After going for 32 and 9 against title contenders, Denver Nuggets, Jennings tops that by showing an amazing arsenal of moves from the inside and out.  Floaters over giants, freezing opposing pgs with hesitations then blowing past them for easy layups, rainbow threes...this kid can do it all.  In his 5 assists, Jennings showed what has been missing on the Warriors since Baron Davis left: A point guard who can see the floor, get in the paint, and lead his open man.  It's only been about 10 regular season games, but will we start including Jennings in discussions of elite point guards by the all-star game?

Love: Curry vs. Jennings mini-shoot out.  While Jennings clearly dominated, Curry showed that he could hold his own.  Like Jennings, Curry has a couple crossovers which led to easy 15 foot jumpers.  You kind of wonder why the Warriors didn't go him more given that he had the hot hand early on.  During the stretch of the third when the Warriors couldn't score on the zone defense, I was thinking how helpful Curry might have been had they brought him in earlier.

Like Jennings, Curry plays the point under control... or at least more so than anyone else trying to front like a point guard on the Warriors.  Unlike Monta, Curry tends not to put his head down, driving straight to the hoop only giving it up in the event that he needs to get bailed out when 2 big men have closed in on him.  The unpredictability of his hesitation moves on dribble drives either gives him just enough space for a jumper or draws defenders in.   Check the end of the clip above where he picks Jennings, then while driving to the hoop freezes Jennings with a fake crossover.  AMAZING!

Love: The return of the fundamentally-sound big man.  Bogut may be considered a racist, but the dude has some nice footwork and a great touch in the paint.  Granted, the Warriors big men weren't necessarily much resistance, but there's a lot to like about this guy's inside and outside game.  We're beginning to see some of this in Randolph, too.  There's a lot to appreciate about shooting .500 and having 0 turnovers.

Love: Monta's left hand.  Wow, he finally realized it exists?  Last season we would never expect Monta to finish with his left, even in traffic.  This season, we've seen Monta tear up defenses (soft ones like Milwaukee) going both directions...even changing directions!  "The Mississippi Missile" maybe not be the best nickname, in my opinion.

Love: Under Armor gear!  And Jennings work-ethic on camera 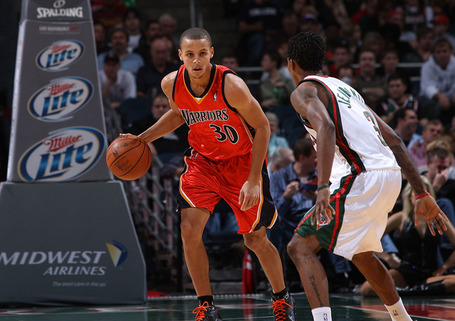 I'll have to give it up to Stephen Curry.  Okay, it's pretty obvious that I'm on his jock a bit too much.  And there's nothing "Wonder"ful about him picking up 5 fouls in 26 minutes.  But Curry showed me that we might have a point guard of the present (notice how I didn't say future).  The fact that he doesn't always drive in predictable straight lines a la Maggette, Jackson, and at times Monta pleases me... as it should please you!

For more on this game from the perspective of the winners (though we're all winners when a fun game like this happens...), check out our colleagues at Brew Hoop!