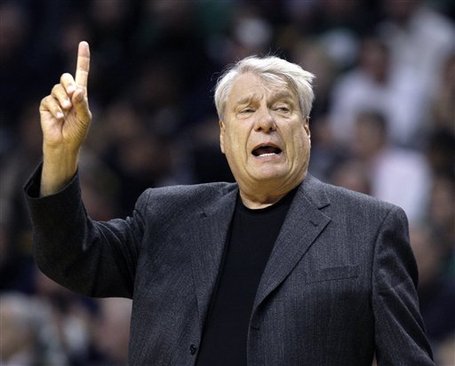 The final outcome was pretty much what we all expected, a blowout win for the Celtics. The Warriors hung tough for the first half, but when that 3rd quarter came around, boy oh boy, that was rough. The Celtics didn't put the Warriors away, they just let the Warriors hang around for most of the 3rd. When the Warriors didn't take advantage of the Celtics early on in that quarter, the Warriors were doomed because once the Celtics found their groove, the Warriors never did, and that's all she wrote. The 1 point halftime lead ballooned to 13 and the Celtics pretty much coasted to victory extending their lead to as much as 16 and never lower than 10. The Warriors put forth a solid effort but that just wasn't good enough.

On a side note, amazingly, my prediction, Warriors by -14 was right on point. Crazy. That's never happened before. Come to me for all your gambling needs.

Hit the jump for some thoughts: 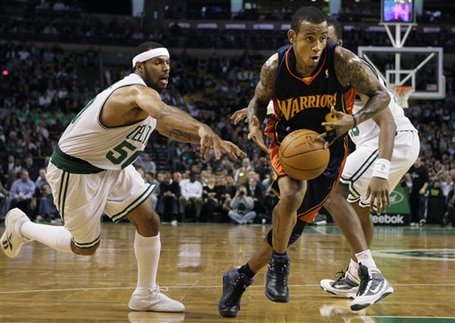 1) Things I Liked
Let's start with the good things.

Is it just me or is there a different feeling when watching the team? No Jax around and there seems to be better team chemistry. The ball moves better, there are less ill-advised shots, and guys seem to be hustling and trying harder. Maybe I just want to feel that way since Jax is gone, but after watching 2 games without him, something feels different, something better.

I like Raja Bell simply for volunteering to play when he knew the Warriors were down to just 7 guys. His wrist is injured enough that he needs surgery on it, yet he still volunteers on playing. I like that and his 23 minutes where he shot 3-3 from 3.

Corey Maggette is playing some of the best ball I've seen him play as a Warrior. He's really working out there and hustling, doing some of the dirty work, and banging inside on defense (not just offense). While he shot just 6-9 from the line, I appreciate his willingness to stop taking so many long jumpers and rather take mid-range jumpers instead while also going inside (where he's best). On a team that falls in love with the long jumpers, they're going to need someone who knows how to score in the paint off of a post up, and Maggette has shown a willingness to do just that. If this is the new Maggette we're going to see for the rest of the year, I'll be very happy.

Randolph always shows us a little glimpse of what he's capable of. He's got these moments where he's able to corral all of his energy and put together a few minutes where he's focused and doing everything right. And then other times, he's just simply out of control. Tonight, he showed us glimpses of what we're all hoping he does in the future.

Lastly, I liked that Monta was able to get in the lane against the Celtics. He's just going to have to convert some of those layups. The old Monta did, but I'm still waiting to see if the new Monta can. Maybe he's still getting used to game speed but it's a little disconcerting that he's not able to finish drives like he did before nor is he able to knock down the mid-range jumpers like he did before.

2) The 3rd Quarter Woes Continue
The Warriors just cannot put together a decent 3rd quarter. After being down by just 1 point at the half, the Warriors came out and stunk up the Boston Garden. It started out fine, at the 8:48 mark the score was tied at 55. And then the drought began. The Warriors couldn't get any points, not a field goal or a free throw. They scored their 56th point at the 4:18 mark - 4.5 minutes without scoring a point. Yikes! It was the combination of 3 turnovers and 7 missed shots that doomed the Warriors. It'll be hard to beat any team when you do that.

You know what's worse? The Celtics weren't exactly playing lights out either. They scored just 3 points 3.5 minutes. The Warriors had a chance to take a significant lead if they could have just taken care of the ball and knocked down some jumpers. They could have taken the lead against the Celtics late into the 3rd quarter!

The one thing that stands out to me in the play by play is this. 5:56 - Boston full timeout. Maybe this was the mandatory under 6 minutes timeout, but either way, Doc Rivers and co. took advantage. The very next possession they get the ball to Rondo who passes to KG for a bucket. Their scoring drought was over, the Warriors' was still going. After that timeout, the Celtics scored on their next 5 straight possessions! I don't know what was said or done during the timeout, but it sure worked. That one Celtics run put the game away and the 3rd quarter saved the Celtics. 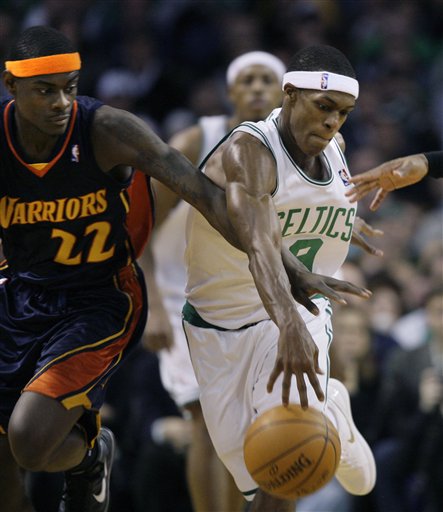 3) Rondo Rondo Rondo
Rondo is a special player. You watch him operate on the court with the stars surrounding him and you can tell he's learned how to get them the ball where they like it. He's got the ability to get in the lane any time he wants and wreak havoc on the defense. His 12 assists show that he's able to find the open man as he runs the offense and gets in the lane. His 18 points came on just 12 shots. Additionally, 9 of his 12 shots attempted were from inside of 2 feet, he made 7 of them. It's a testament to how good he is at creating for others and scoring while in the paint.

The Warriors struggled keeping him contained especially in that 3rd quarter. When the Celtics made their run after the 5:56 timeout, Rondo was involved on 4 of the 5 consecutive scoring possessions. Assist to KG, makes a layup, makes another layup (and 1), and then assists to Pierce. All in all, he had 12 points in that quarter to go with 4 assists.

Again, he's a special player and fun to watch.

4) 21 Turnovers
Unacceptable. 21 is good in blackjack, but when you give the ball away that many times, more than likely, you're going to lose. Heck, the Celtics had 30 points off turnovers! You can't give away possessions like that with poor passing and poor decisions.

Curry had 6 of them to go with his 7 assists and 4 steals. If he took care of the ball a little better this would have been one of his best games as a pro. Oddly, Curry was a +5 in 35 minutes. That means in the 13 minutes he was off the floor the Warriors were -19. Crazy.

Vlad Radman had 5 turnovers and Randolph had 4. Sheesh. Are the big men handling the ball that much or are they just careless with the ball? Methinks they're careless. I expect that from Randolph every now and then, but I have no idea what to expect from Vlad, certainly not 5 TO's.

This team isn't good enough to give away the ball like that and still win a game. 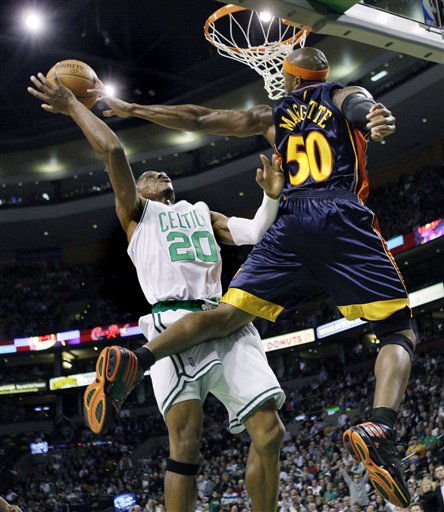