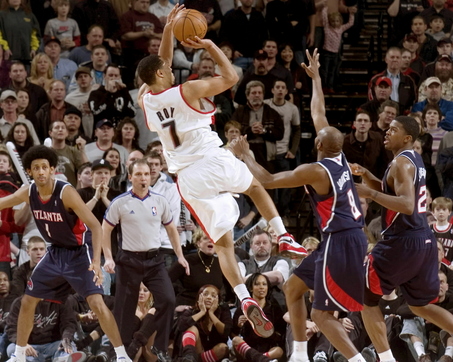 Prepare to have nightmares of Brandon Roy

The big, bad Blazers come to Oakland with their big, oft-broken center, Greg Oden, and big star Brandon Roy. This is a very good team and they're going to be good for a long time. In a few years, perhaps next year, this team could challenge for the title. Jealous? Yes. They just have guys that are easy to root for.

On the other side of the floor, the Warriors are, well, the Warriors you know and love. But, Warriors basketball post-Jax has been much more team oriented, slightly bearable to watch. Even though both games ended in losses, there were definitely some encouraging signs for the team moving forward.

Fewer "what are you doing?!" shots
I'm not sure what it is, but Jax took a lot of bad shots and that seemed to rub off on everyone else. Now that he's gone, it seems like the other guys have reverted to knowing what a good shot is. Well, everyone except for Anthony Randolph. He still shouldn't be taking so many shots outside of 3 feet. It's been nice.

Steph Curry and Monta Ellis
The ball is in their hands more and that's a good thing. Jax would make a nice play every now and then, but these are the two best ballhandlers and I like seeing the ball in their hands more often, especially Curry. He just has a knack for finding the open man and anticipating what the defense will do. More ball with ballhandler + less time in Jax's hands = good.

Corey Maggette
The biggest positive out of all this mess is that Corey Maggette is starting to play a different game. He's working his butt off on the defensive end - something I don't think I've seen. He's taking less long jumpers and working to get inside more often. Lastly, he's rebounding more. Not sure what's got into him, but I've been impressed probably for the first time since he's joined the team.

It's only been 2 games, I'm looking for anything to make me feel better about the Warriors. Hopefully this is the beginning of a newer, better team (provided nobody else gets injured).