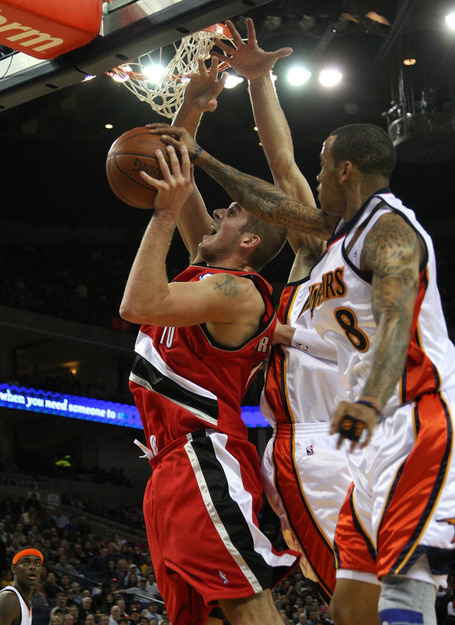 The Warriors have found the big man they've always wanted.

Chris Hunter, formerly of the D-league as of earlier yesterday afternoon, started the second half of the Warriors win over the Portland Trailblazers and shutdown Greg Oden.  This definitely secured the win as without Hunter's defensive presence in the paint, the Warriors might have been down by as many as a dozen or more like the first quarter where Oden dominated and helped the Trailblazers race out to an early lead.

The Warriors haven't had this stellar of a debut by a big man since Marc Jackson, jokes Atma Brother #1.

Hunter's defensive presence, however, reflected a larger team effort from the whole dubs squad where defense might have been as important, for once, as scoring.

For more, see what the good folks at Blazers Edge have to say about the game! 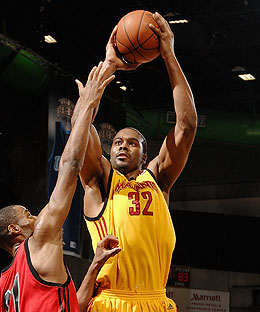 Chris Hunter is now part of a proud line of D-league studs that have found their roots in the NBA through the Golden State Warriors academy of basketball.   Like those before him, Hunter shows a surprisingly steady game and solid fundamentals.  The Warriors, surprisingly, ran an isolation for him against Oden, which he hit an open jumper on his first shot attempt, a fadeaway over Oden's Mr. Fantastic stretched arms.  He then hit a cutting Curry with a nice bounce pass into the lane which led to a wide open jumper in the corner by Morrow.  Within his first 6 minutes of playing, you would have thought this guy had been playing with the Warriors for a while.  Or maybe this is really suggestive of how skimpy the Warriors playbook is?  At any rate, I'm seeing some nice things from this University of Michigan alum.  This might be might be the proudest I've ever been for that school, which I and R.Dizzle currently attend.

But things weren't looking that great.  From jump, I thought this game was about to be a disaster.  Maybe it was ominous clouds and stormy weather all day.  But before tip-off, things already didn't feel right.  Usually, coming to the Oracle Arena is equivalent to hitting up the hottest club in the east bay.  Good looking women decked out in the voluntary dress code of Warriors gear, fly sneakers or heels, and a beer.  The quality that we're used to was not quite there...yet.  Oh yea, and then there was that Greg Oden guy too. 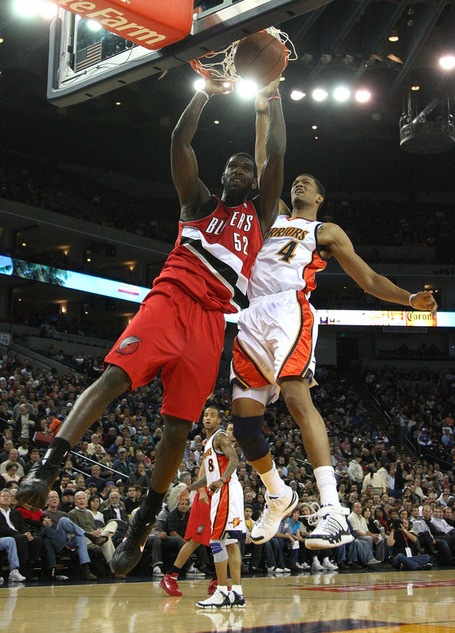 Anthony Randolph looked completely helpless against him on defense.  Steve Blake was even tearing into the Warriors, backing down Curry repeatedly on the block or shooting over him.

As if this wasn't insulting enough, the Dreyers ice cream up in club 200 cost $6.00 a cup.  That's exactly two times the price of the Loards ice cream across the street from my house.  The ice cream was good, but this was just reflective of all the ugliess at the Oracle - on and off the court.  Damn you Cohan.

Luckily, things changed quickly in the second quarter.  Oden in foul trouble paved the way for the Warriors to, intelligently, attack the basket.  Monta Ellis did what he does amazingly, which is getting to the hoop.  Stephen Curry did what Warriors SHOULD do more often, which is getting Anthony Morrow involved the best way Morrow knows how: hitting open jumpers.  The steady balance of inside outside definitely kept the Warriors in the game during the second half.

You know who also kept us fans in the game?  The Warriors Girls.  Susan Hovey (choreographer and dance director) looks like she's assembled the best line-up since 2003-2004. The WG's rockin' their white-on-white booty shorts and crop top/sports bra get-up was a nice touch.  Susan Hovey is finally promising us what she originally came here to do: establish more "Pussycat Dolls" type entertainment.  The cheering stinky dudes sitting dudes next to me hogging the arm rests wildly cheering attests to the fan appreciation of Hovey's efforts on her end (Riley could learn a thing or two).  Also, yesterday was Hovey's birthday, so everyone please wish her a happy birthday if you can via GSoM.

But it seemed that the Warriors last night lived and died by Dennis Rodman's wise words from Double Team: "Offense gets the glory, but defense wins the games."  As awesome as Monta's and Morrow's offensive stats looked last night, it was really the collective hustle on the boards (sans Oden on the floor), smart help defensive by Vladimir Radmanovic, and Monta's man-to-man defense on Brandon Roy that helped seal this victory.  Radman was all over the place on defense, but not like Randolph (we'll get to that in a second).  You could see him doubling down in the paint when necessary.  He was often the first person to try to defend a wide open man.  He was even crashing the boards when Randolph struggled to get position against Pryzbilla.   The best thing about Radman?  He shot .500 and not one of those attempts was a 3-pointer.  Talk about efficiency.

Maybe playing with Kobe back in the day actually paid off?

As the second quarter came to an end and the Warriors raced out to a short lead, Oracle started looking like the hot spot for good looking people that I always knew it to be.  Maybe they showed up late.  Or maybe I was just in a better mood.

Anyways, the third quarter featured Hunter and his ability to contain and frustrate Oden in ways that Randolph and MIKEY clearly weren't able to, which proved to be the difference maker, in my opinion. 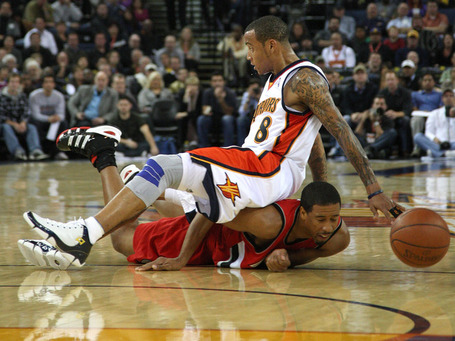 Monta showed me (and Atma) a defensive side of him that he wants everyone to know. He clearly put his back into it for once -- a new defensive stance perhaps?  Of course, in the process, he manages to publicly and passive aggressively diss his teammates:

"It definitely gets overlooked," Ellis said. "I hear people say Monta can't play defense, but if you go back and look at the tapes, you don't see Monta getting burned. I can do that day-in and day-out." (Yahoo! recap)

We would like to see that.  And more of that impressive court awareness that led to 6 steals, several off intercepted passes either cross court or on the break.

But sometimes I can't tell whether Monta's offensive dominance just means he's a glorified Ben Gordon.  Meaning, a lot of times it just looks like Monta has some major tunnel vision and already knows he's going to shoot it before he even gets the ball.  Monta's game has grown a bit on both ends of the floor, and I wonder if there is more to come as the season progresses. 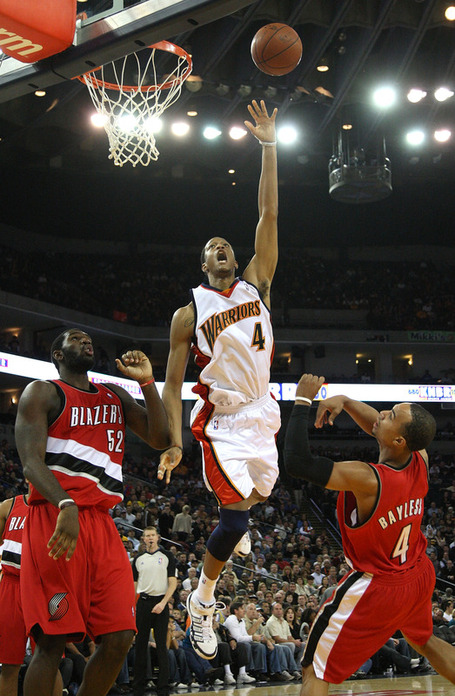 And Hunter's ability to play steadily clearly highlights Randolph's inefficiencies and mental lapses as a young player.  His two offensive fouls calls on wild drive to the hoop don't quite capture the problems of his game like when he battled Stephen Curry for a rebound to the point that he knocked the ball out of bounds off of Curry.  After a tremendous defensive effort by Randolph to prevent the Blazers' second chance points, which had hounded him throughout the first half, Randolph managed to tap the ball out away from his opponents.  You have to love his hustle to try to corral the ball in.  But plays that make you groan and wonder if this kid will get it together or if he's just regressing into bad habits.  I won't get into it much more, but Hunter's 2-2 from the field reminds you, or possibly makes you want to forget, Randolph's 4 bricks all within half a foot from the basket.  This guy needs to learn some tips on how to finish in the paint, quickly.

The Warriors lead hit twenty deep into fourth quarter and when the buzzer rang, you would have thought the Warriors just won the championship with the confetti falling from the sky.  Why make the janitors' job more difficult?

Tonight's Warrior Wonder has to go to Chris Hunter.  While the obvious choice is probably Monta or Morrow, I chose Hunter based off his ability to step in and make a difference instantly in his limited minutes.  He was so good that the crowd gave him a standing ovation.  Can we expect him to start the next game?