GAME THREAD: Game 4 - Warriors vs. Clippers - The battle for the back of the pack rages on!

Share All sharing options for: GAME THREAD: Game 4 - Warriors vs. Clippers - The battle for the back of the pack rages on!

In reality, in the young season, it's probably too early to cut anyone out of the playoff picture, and after netting our first win on Wednesday, things seem much more upbeat than they just two days ago. Still, history suggests that this isn't a clash of titans, and the Clippers' rapid accumulation of 4 losses against a lone close win over the visiting T-wolves on Monday won't shave away too many doubts about where they'll wind up come season's end. But they play 'em for a reason, and expect plenty of drama to be had. 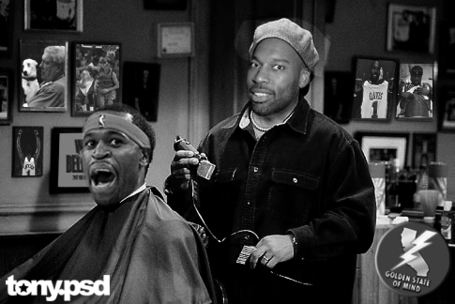 Rumor has it that the Clippers won the 2009 draft lottery. Rumor has it that they selected the draft's closest thing to an instant help big in Blake Griffin, though you would not know it from watching any of their games so far. At present, Griffin has scored no more points, grabbed no more rebounds, and logged no more minutes in NBA regular season games than I have. And while it's the general spiteful bad luck that has a an opponent's top gun get healthy just in time to face the Warriors, Griffin is still sidelined with a stress fracture of the patella (or "knee cap" for those of you who aren't up on your anatomy and osteology).

Broken knee caps just make me wonder if he spent too much time trying to act like this guy:

And while Griffin, who appeared ready to help in the pre-season, would certainly be a welcome addition for the Clippers, it hasn't been the front-court where the Clippers have been hurting. Center Chris Kaman has been putting up more than 20 points a night while shooting 60% from the floor to go with his 10 rebounds (albeit in 40 minutes on the court) while Marcus Camby is averaging his usual double double while connecting on more than half his shots as well.

In fact, as a team, the Clippers have shot reasonably well from the floor, slightly better than their opponents despite a terrible start to the season by Baron and the unholy duo of Rasual Butler and Al Thornton doing their best to do make the SF position a major negative for the other team from LA. The factor that stands out above all others has been turnovers, where the Clippers have averaged five more give-aways a night than their opponents the afore-praised Kaman being the chief culprit. It is hard to win when you hand the ball over so readily before even getting a chance to shoot.

Meanwhile coming off a win where finally more went right than went wrong, our Warriors will be confident and poised to make it back to .500. And doesn't that sound much better than "look for their second win"? Here's to hoping that the tide *has* changed and we can shave out another victory!

That task will be made somewhat more difficult without centers Andris Biedrins, whose availability is presently unknown after straining his back in the tailing minutes of Wednesday's victory, and Ronny Turiaf who remains sidelined with injury as well. Mikki Moore and Anthony Randolph will man the middle for the Warriors who will, undoubtedly turn to "small ball" for most if not all of the game as a result. Randolph performed his best last year after Biedrins went down and he had to spend most of his time in the paint, so there's hope that this could get the talented young rebound machine back on track. (And if that doesn't work, perhaps Nellie will make good on his promise to put Acie Law IV in his front line.)

Monta does it all, trying for a 2nd consecutive double-double, challenged only by the fact that there's only so many assists to go around, and Curry's steady passing and continued emergence as a bona-fide NBA lead guard.

Anthony Randolph gets his season on track, spending more time in the post and hits double figures, at least in minutes played. Serious, this is a big opportunity for Anthony. We need him to step up big tonight.

Jax gets a technical. He's due!

Baron misses 10 shots and looks in the stands for an old lady to lend him her walker before the game ends.

Warriors wonder to be: Stephen Curry, just because.

Warriors by 9 when it's all said and done.