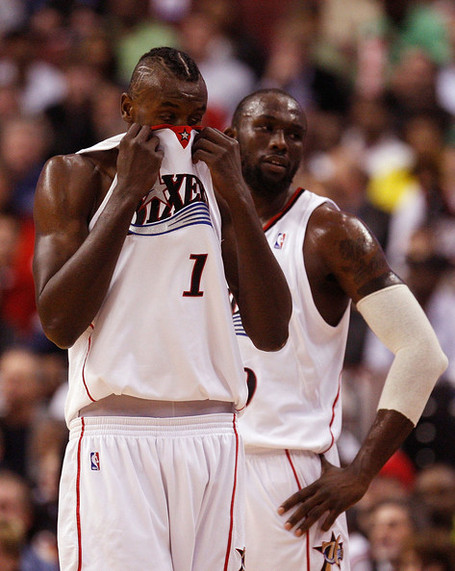 Kind of a stinky haircut don't you think?

Jump for a tiny tidbit about the talks between the Sixers and Warriors about the man our friends over at Liberty Ballers call SAM BAM Dalembert.

One NBA general manager said the Philadelphia 76ers are still actively trying to move center Samuel Dalembert. A league source said the Sixers contacted the Warriors to see if they had any interest in Dalembert, but talks never progressed. The Warriors are still trying to trade Stephen Jackson but have yet to field a suitable offer. The Cavaliers remain interested in the veteran swingman.

From Spears' report it doesn't appear that Stephen Jackson was what the 76ers were asking in return for Dalembert, but something like Jackson and Speedy Claxton for the Sixer Center [ESPN Trade Machine] ain't bad at all for the Warriors. The Warriors get rid of Jack before he makes a bigger mockery of himself, Robert Rowell (actually that one's pretty funny), and finishes the 2009-2010 season as the league leader in turnovers. Plus the Warriors shorten their financial commitment by 2 years, thus setting the Dubs up for the Chris Paul sweepstakes (I kid).

In terms of defense (gobbling up rebounds and protecting the paint) and unfortunately making mistakes Dalembert is Ronny Turiaf on steroids. I must say the Haitian center has always intrigued me. He never fully "developed" just like Andris Biedrins never "developed" any low post moves or a jump shot. However just like Biedrins Dalembert is raw, but effective. SAM BAM would instantly be the Warriors' best interior defender and would do a ton to help out their rebounding woes.

After this season there's only 1 year left on the 28 year old Dalembert's deal, so he could potentially be valuable as a single, sizable expiring contract during the 2010-2011 NBA season. A contender might even want to pick up his defensive tenacity for a stretch run in the 2011 NBA Playoffs. Compare that to the remaining 3 years on the "Captain's" contract (thank you Robert Rowell) taking him into his mid-30's (read: way past his athletic prime) and Jack's history of well... throwing tantrums.

So why would our friends in Philly do it?

I have no idea.

And that's the problem.