Share All sharing options for: RECAP #16: Warriors 126, Pacers 107 - The Evolution of Monta Ellis, he's getting the superstar calls! 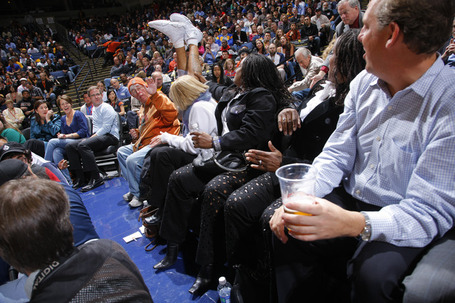 (Monta, while diving for loose balls, makes a plea to the fans to vote for him for this year's all-star game)

Monta Ellis is making me eat my words.  And it has never tasted so good.

I have blasted Ellis time and time again for being a one-dimensional player his first few years in the league: Ellis lacks a left hand.  Ellis is a terrible dribbler and passer.  Ellis only knows how to drive in straight lines.  Ellis doesn't help little old ladies cross busy streets. And the list goes on and on.

But for the 5th night in a row, we're all witness to Monta's phenomenal evolution from "potential" to leader, lockdown defender, and a very strong candidate for an all-star appearance this year.  Monta's incredible 45 points paced the Warriors tonight and his 7 point outburst in less than a minute during the beginning of the fourth quarter reminded me of that dominance that I only see from...dare I actually say it.. superstars like MJ, Dwayne Wade, and Lebron James?  And I say this ALSO because he went shot 16 free throws meaning he's getting those superstar calls, like a superstar!  Or Kevin Martin to say the least.

Okay, I know this may sound ridiculous to say.  Almost as ridiculous as say all the weirdo love for 49er QB Alex Smith and his solid play against the worst above .500 team in the NFL.  The Warriors win over the Pacers could be of an equivalent battle of suckiness.  But Monta's ability to rally the rest of the troops in a very surprising come-from-behind win and trusting his teammates to make plays shows us a lot of his evolution as a player.  Disposing of crappy teams is a step in the right direction for Monta and the rest of the Warriors, right?

For the Pacers perspective of the game: Indy Cornrows

From jump, this game looked bad.  Dunleavy's tenure with the Warriors bad.  Missing wide open shots, mishandling the ball on passes and off the dribble, and a few pretty embarrassing posterizing dunks by Dahntay Jones and company on our weird ensemble of Warriors, which Jim Barnett mentioned at one point during the game, had only 1 drafted player.

It was so ugly that Dunleavy in his second game back from his career-threatening injuries was able to score an extremely efficient one point per minute in the first half and he had 10 points by half time.  The Pacers moved the ball well and the Warriors scrambled to cover the open man.  The Warriors, on the other hand, moved the ball, too, except into the hands of the Pacers.  I learned a valuable lesson in this first half, spin moves in traffic, with three to four players surrounding you, will most likely leave you picked.

But Monta  continued to pace the Warriors, or at least keep them from getting blown out completely.  Stephen Curry is going through some growing pains right now and his shaky handle lately makes me wish Monta will handle the ball handling duties full-time (that feels weird to say).  Plus, he had no chance of staying in front of TJ Ford (and Ford seemed to know that), which illuminates the struggles that Curry tends to have right now staying in front of smaller quicker points or anyone at that. 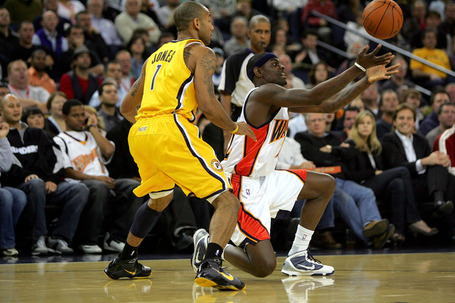 (Morrow respects the game as he worships the basketball itself.  Or he's employing some under-hand shooting techniques of Rick Barry)

VladRad looks great on defense and on the boards, but like Morrow, a lot of times looks best as a spot up shooter.  But even with all the offensive inefficiencies in the first 24 minutes, Monta, like Moses, "parted the red sea," as Barnett kept referring to the Pacers poor defensive execution against the driving Monta.

As the offense sputtered, Monta took the situation into his own hands and continued to attack the basket to get some easy buckets from the foul line (14 out of 16) even as they packed the paint.

But it wasn't just his amazing offensive display (23 points in the first half) that was so impressive, but his ability to accumulate steals (5 total and nearly averaging 4 per game in the last 5 games) and stay in front of Danny Granger.  It's definitely this growing commitment to defense that makes me think that Monta is more than just a scorer on a terrible team. 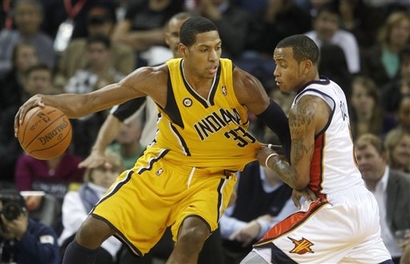 In the third, Monta finally got some help from his bench as CJ Watson picked up some of the scoring load.  CJ Watson showed us some of his all-around game, too, creating turnovers and scoring opportunities for teammates.  Watson shot a blistering 70% from the field but also had 6 assists to go with it.  Just goes to show how good the Warriors can be when they pass.  But just as important, the three steals that Watson had, somewhat problematically, shows how reliant the Warriors offense can be when it relies a lot of times on fastbreak points.

Watson's scoring seemed to create defensive havoc on the Pacers as they struggled to cover two scorers.  But this seemed to open everything up for the rest of the Warriors as Morrow finally found his shot and Corey Maggette finally found a way to score. 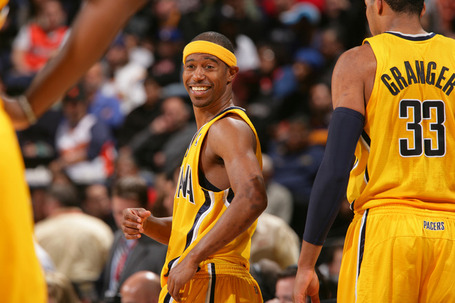 (TJ Ford tells his teammates during the game: "Monta is GOOD! I can't defend him at all!")

But what was probably most exciting about the Warriors play in the second half was the increased amount of ball movement and willingness to distribute.  As much as the players, beat writers, and even fans have been suggesting about the improved team-work, this game was emblematic of this new "culture of sharing" that the Warriors have slowly begun to embrace.  I almost laughed seeing Maggette go scoreless in the first half with several times not even looking to shoot the open 10 footer, instead trying to feed his teammates with the hot hand or wide open look.  As CJ Watson began to take over midway through the second half, it was a pleasant surprise to see Monta take a back seat and trust his teammates to pick up the scoring slack.  I'm sure he welcomed the burden off his shoulders as well. 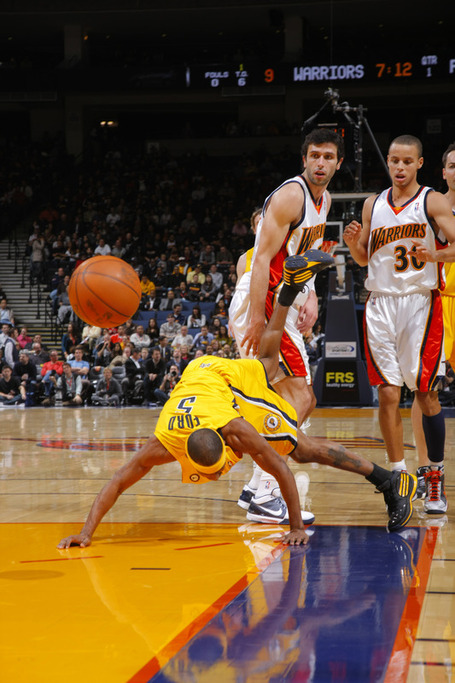 (Warriors defense at it's finest)

So is there any bad news?

Well, we all know about Anthony Randolph's sprained ankle, which he injured away from the ball as he tried to plant himself for a rebound.  Let's hope he heals quickly.  But honestly, what's up with Randolph's inability to stay off the floor?  By off the floor, I mean he's constantly falling down getting out muscled by the big men in this league.  OR his footwork on offense is so terrible that he's always falling down after a spin move.  OR getting knocked over when his weak shots are blocked on layups or dunks.  Honestly, this guy, as Atma Brother #1 mentioned several times, needs to work on his core.  Or maybe, he needs to do some yoga like Antawn Jamison.

The first half exposed some of the worst parts of Warriors basketball and the inconsistencies of this young team that at times looks like it really is nothing more than d-league studs.  This isn't to say that we don't need Chris Hunter's help on the interior.  He is by no means the solution to all our rebounding woes, but his big body and thunderous dunks with the two hand slaps on the backboard give this team a little swagger that it's sorely missing.  Also, why doesn't Chris Hunter smile at all during the game?  Even when he has tight dunks during a momentum upswing?  Perhaps worried he might be back in the d-league in a quick minute?  Or perhaps Poland or Belgium for that matter?  At any rate, I can confidently say we all appreciate Hunter's current role on this team.

Warrior Wonder for today is a no brainer.  Monta Ellis accounting for one-third of the Warriors points on 50% shooting is phenomenal.  Warrior Wonder #2? CJ Watson.  Having another scorer and playmaker opened up the game for everyone.  But honestly, what's up with his haircut right now?