First and foremost, a huge thanks to IQofaWarrior for stepping up at the last minute to create an Open Thread. Without it, many of you may not have had a place to vent your pain and would no doubt be sitting atop clock towers right now. And speaking as someone currently up there, let me just say you don't want to be anywhere near here. It's cold, drafty and I have no idea what time it is. I guess I could lean over the side to see the clock but I might fall. Plus it would be upside down and I'd have to do that whole upside down clock re-arrangement in my head.

Frankly, after watching four quarters of this debacle, I just don't have it in me. 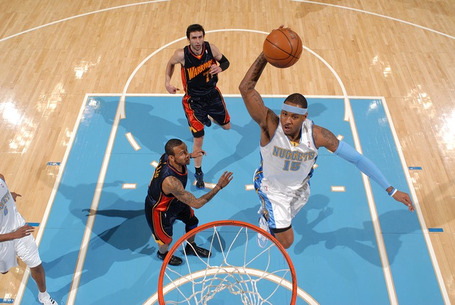 And this was when we were trying to play defense...

Warriors Web: What did you expect, a win?

Save the efforts of the first quarter, there wasn't really a whole lot that went right during this game. Hit the jump and let's talk a little bit about the bad, the bad, and the ugly.

Before we begin, let's get the obvious out there. The Warriors were sporting a roster 8 players deep (which, sadly, is the most we've had in a while) just came off of an energy depleting game in the Bay the previous night and flew out to play a team whose cheerleaders are taller than our backcourt.

...Ain't no way we were walking away with this one.

That being said, there's no avoiding the fact that the Warriors simply didn't look like they wanted to be out there playing tonight. Despite the fact that we were almost neck and neck with Denver on turnovers by the final whistle, many of our errors came off of lazy passes and severe miscommunications. At some points in the game it appeared that the Warriors were expending more energy chasing each others' passes that Denver was trying to score. Of course, it's not like Denver has to expel that much energy to score with the defensive effort we put forth...

(Intermission to pat myself on the back for that clever segway.)

Honestly, we're not the strongest defensive team out there (understatement) but tonight was just...well... horrendous. Specific references of the Nuggets dancing down the paint aside, we gave up back to back 44 point and 38 point quarters! Halfway through the second quarter the Warriors collectively decided to throw and and all defensive fundamentals out of the window and to just start doing their own thing. It's too bad Nellie wasn't there because he would have been flashing some serious Nelliebelly. 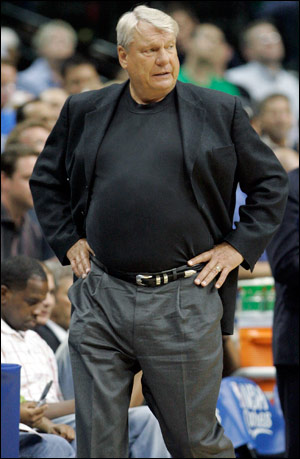 Trust me. When this thing comes out heads are about to roll.

At the end of the day it's really disheartening. I'm not even really referring to the loss, I'm more downtrodden about the manner of loss. With the Warriors coming off of a great 2nd half against the Pacers yesterday, one would hope that they would have tried to use today to start up a little momentum. Right now, with the state of our team, that doesn't have to mean a win. It could just mean our squad going out and showing that they know how to play together and putting up a solid fight against a better team.

Unfortunately, the only thing we had going on in unison tonight were the jerseys on our backs. And even those were different. What with everyone wearing different numbers and all.

Worst recap close ever. Fitting of the display we saw tonight I guess. (Hey, I think I just rescued it! Damn.)

Hey now Morrow! Tonight he dropped in a cool 27 to once again make the opposing team wonder who the heck he was. Not that I mind Morrow taking threes (as he actually makes them) but it was nice tonight to see most of his points come from the inside. Granted this wasn't for lack of trying from beyond the arc. Take it down A-Mo and lets put this game securely where it belongs. In the past.