via www.zacharys.com
This is about all I know about Chicago. Damn good pizza.

What's wrong in Chicago? I don't really know and I don't really care, but I certainly hope they don't figure it out until Saturday. This is a game the Warriors shouldn't lose even if they're playing on the road. in fact, this road trip isn't looking too bad. The Warriors get to face 2 teams with worse records (Nets and Sixers), one team with a near identical record (Bulls), and another with a slightly better record (Pistons). But in the grand scheme of the NBA, this game means absolutely nothing to anyone else other than Warriors fans and Bulls fans. It's like a Kings-Raptors game in the middle of the season, nobody cares. It's all about jockeying for lottery position.

It cannot be understated how bad the Bulls are right now. They've lost 9 out of 10, 7 of those losses were by 14 or more. Heck, they lost to the Nets! That should count for 3 losses. I feel a coaching change coming on. When your team gets blown out so many times in a row and you don't have too many injuries, the players have quit on you. 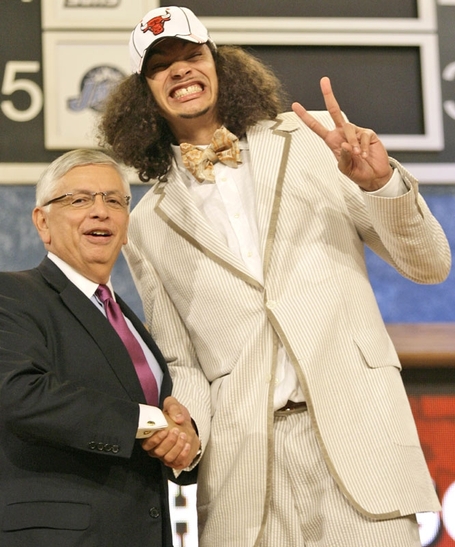 Betcha didn't expect that after hitting the jump. That one always makes me laugh.

The Warriors are still banged up. Andris Biedrins' osteitis pubis is not healing as soon as we thought it would. Ronny Turiaf's less fun injury name, sprained left knee, isn't healing very quickly either. I'm starting to question Tommy Abdenour's abilities. That's right! Tommy Abdenour, not Cohan, Nellie, Rowell, Monta is the reason for the current state of the Warriors. How long has he been with the Warriors? How many times have we made the playoffs? Why is it that we have so many injuries this year and last year and guys take so long to recover? Raja Bell didn't get surgery while with the Bobcats, but as soon as he comes here, boom, surgery. Someone should be held accountable! I think Tommy is the final scapegoat unless we're going to blame the cheerleaders, waterboys, and entertainment. This has nothing to do with tonight's game except that I'm still waiting for our "franchise" center and best backup (dancer) to play again before 2010 hits. How much better would the Warriors be if they replaced MIKEY with ^^^^?

Back to the game:

What will be greater?