I had not heard that Mikki Moore was injured until well after the game, so it came as something of a surprise that he was not in the starting lineup.  He wasn't at the shoot-around either.  Was this it?  Had a big deal gone down where he and the rest of the expiring contracts had been packaged for something resembling the foundation of a basketball team?  Sadly, no.

Moore's absence simply meant that someone else would have to pick up the slack of being on the court for a quarter and a half without accomplishing a thing.  And try as they might, the rest of the team found out that such was no easy task. That level of inconspicuous nothing takes more than most of this rag-tag crew had in them.

Vladimir Radmanovic, who pretended to be a big man for much of the game, tried, but in his time on the court, Vlad simply missed too many shots. To accomplish nothing one must find quieter means of futility.  Miss one or two and you can be forgotten, but fire up miss after miss like he did and you're likely to stand out.

Stephen Curry's noble attempt also failed to capture the essence of Moore, as (and I'm operating off of memory since I've yet to check a box score) his 458 fouls (plus or minus a few) attract too much attention.

And while eyes are still on Anthony Randolph, he's unlikely to fill out as many empty, unnoticed minutes.  He should still try to take most of his shots no more than an arm's length from the rim.  With even fewer big men to compete for playing time with, Randolph appeared to settle for jumpers above the key.  If he took a shot in the paint, it was while I was distracted by the guys behind me making up stories about golf. ("So, you know Mike is a real good golfer I'd heard, but he hasn't been playing in years.  Still he went out and shot a... [pause to make up a number that's not so low as to be unbelievable, but not so high as to possibly not sound impressive enough] ...a 73 [nailed it!] on a course in Phoenix on our last business trip there.  Apparently, Mike played at Dook [where they have their own course, and it's real hard to make the team there.  The only way to make the team is to shoot 7 under par or better for 3 rounds in 3 days, while also dragging a Volkswagen around the course using only your teeth or some other ridiculous rite of passage suggesting that in most years they'd never actually field a full squad].  So you know he's gotta have a whole lot of talent!")  Anthony does have a real nice stroke from the right elbow though. He's deadly there.  Unfortunately, from the *left* elbow and more or less anywhere else on the court, he may as well just hand the ball over to the opposition.  It's not going in and we're not getting a rebound.

No, if there was a Warrior Wonder as in "I wonder where he was because I didn't seem to notice him at all tonight" it goes to Anthony Morrow.  I didn't remember him doing anything in the second half, and wondered why, when we could have used the shooters to try to stay in the game, he wasn't playing more. That was until my friend in the seat next to me pointed out that he was actually in the game, and had been for much of the second half.

It's tough to really call this a team right now.  It's more of an entourage where all the members just happen to be Turtle. Monta certainly shined above the rest.  The ball seemed to find his hands in the right place and he seemed to be moving just that much faster and that much more smoothly than anyone nearby him (which was good when that guy is a Spur, but not so good when that guy is a Warrior).  All critique of his ball-hogged ways that have been too frequent of late, tonight, *just watching him play*, it's clear that he can do quite a bit of good on the court and remains one reason to watch.  He may not be an "all-star" and as a centerpiece of a winning team, he may always be lacking in some important regard, but he's also capable of dazzling grace on the court.  We can lose games without him, but we'd miss out on some true on-court poetry in the process. 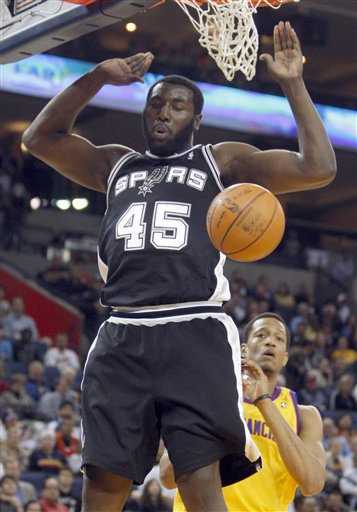 The Spurs made it interesting.  They aren't particularly exciting and the Warriors led at halftime, but they just played with a quiet confidence where you knew that inevitably, they'd be around when the third quarter collapse hit.  It did.  They were.   Even knowing that you are watching a certain future Hall of Famer in Duncan, his hand heavy with championship rings really doesn't spice up the methodical Spurs.  If there's a player who actually caught my attention, it was DeJuan Blair.  If he's "undersized" he sure doesn't look it in terms of his presence on the court.  Maybe his head is a few inches below that of a "legitimate NBA bigman" but his presence is no shorter.  When there's a shot off the rim to pull down, he looks like he's about 8 feet tall.  And sure, his knees are held together with duct-tape and zip-ties and looking at him you get the impression that he's bound to be corpulent sooner or later, at which point he may no longer be fit for NBA duty.  But until then, he's there where he needs to be, looking huge and doing what needs to be done.

Other observation: there are a whole lot of fans in jerseys of players who now play elsewhere around the association.  Particularly cute was the couple sporting the (his) Jackson and (her) Richardson models walking hand in hand out of the arena after the game.  Unlike about 60% of the attendees, they stayed 'til the bitter end.