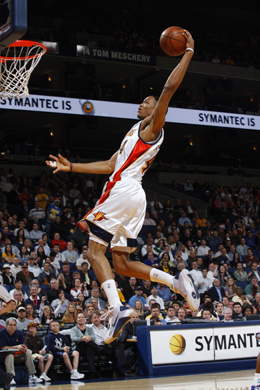 Everyone on the current Golden State Warriors roster should be on the table in a trade. As of writing this team has the 4th worst record in the entire NBA.

From Chris Broussard's Agent: Randolph not against trade piece over at ESPN.com:

Sources within the Warriors organization and around the league say the 6-foot-10 forward is available, but they said he is not being shopped.

"They're not trying to unload the guy," one Western Conference executive said. "But they are disappointed in him, so now they're willing to listen to other teams. Whereas before the season, their thinking was that he was untouchable and they wouldn't even listen."

Executives mentioned New York and Houston as clubs that have interest in Randolph, but he will not be easy to move because of the great disparity between his small salary ($1.8 million) and his perceived upside. The most likely trade scenario would include Randolph as part of a larger deal that featured a more accomplished player.

"I don't know that Randolph's stock has dropped around the league," the executive said. "He's a great talent; he just hasn't done much yet. So he's more of a sweetener that could get another deal done if you threw him in."

I'd like to see Randolph stay here and blossom, but I honestly can't tell whether that's ever going to happen. Is he a future superstar or even star? Or is he going to be some much wasted talent a la Stromile Swift? I really can't tell. What I do know:

What I don't know: