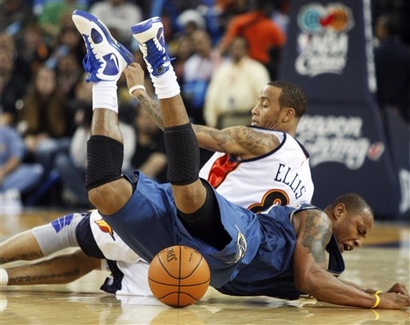 Betcha didn't know Monta was a professional wrestler too!

Hooray Gilbert came in and showed us why it was his arena.

I'm not even going to justify that game.

Instead I'll give you guys another story!

R Dizzle - Man, it feels good to be back the Bay - beautiful skies, sunny days, and best of all - I get to see my Warriors!

Killa Shom - Yeah man, good to have you back.

R Dizzle - Word, but hey, where are all the people?

Killa Shom - Are you serious? This is a Warriors game...nobody comes anymore. ESPECIALLY against the Wizards.

R Dizzle - The reality of that statement irks me. Stupid Cohan and Rowell... 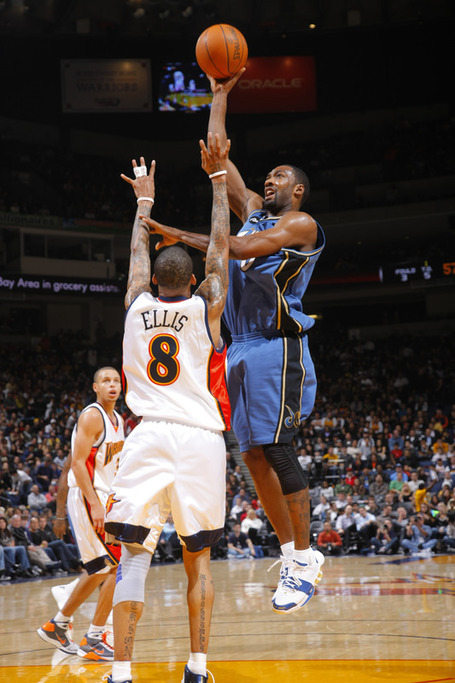 Atma Brother #1 - What's goin on man? Help yourself to the food - hella good stuff all around.

R Dizzle - Nice...Killa Shom - go do your thing. Just save me some of Nellie's favorite - Bud Light!

R Dizzle - Ha ha ha. Yes, that would be my older brother. And yes, I'm the young'n of the group. Doesn't that come out in all of my writing?

R Dizzle - Are you kidding? It'll be dope! That piece dropped about Jeremy Lin was OFF THE CHAIN!

R Dizzle - Ok look, if you ever have any trouble writing something real, just do what I do.

R Dizzle - WRITE A RECAP ABOUT NOTHING. 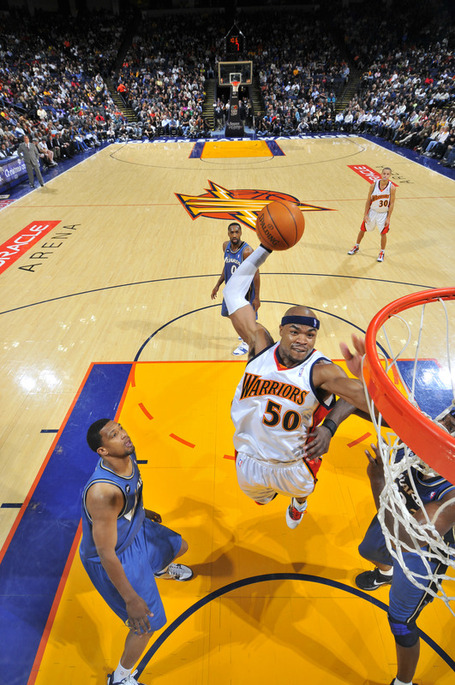 Sometime during the game

JAE - Nice to meet you too.

R Dizzle - I really love your stuff on the main page, great statistical analysis and everything. Puts my "work" to shame.

JAE - No no, don't say that. Not everything's full of numbers. I managed to pull my last recap without a single stat.

R Dizzle - True true, I was impressed man. I gotta ask you, with all these trade rumors and what not, what are your thoughts about Anthony Randolph?

JAE - Guy has talent, he just needs to play within his game. FOR EXAMPLE, look he's got the ball now, top of the key. He never makes this shot but he always pull that elbow jumper.

R Dizzle - That was kinda ugly.

JAE - Point being, he should know his limits.

R Dizzle - Agreed. Now he's got the ball again...dribbling up... 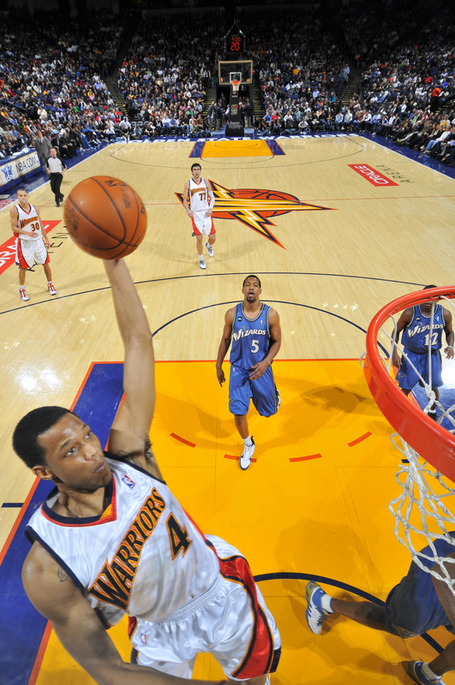 Later in the game

R Dizzle - My main man Tony! Good to see you and your lovely wife.

R Dizzle - How come you don't have any signs at tonight's game?

Tony.psd - They wouldn't let me.

R Dizzle - What do you mean?

Tony.psd - They won't let me in with "We Suck" signs or anything about the front office.

Tony.psd - I know, how are they going to hate on artist?

R Dizzle - Agreed. HOW ARE THEY GOING TO HATE ON AN ARTIST. WE DO SUCK. 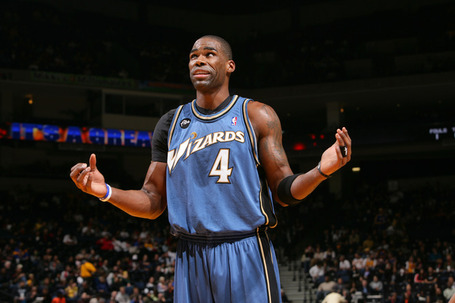 Just to keep things short, here are the next 20 minutes of the game as a collective whole.

"Who's going to stop Heyward?"

"Caron Butler's the man - Maggs for Butler straight up!"

"Why is he shooting it?"

"Monta with another turnover." 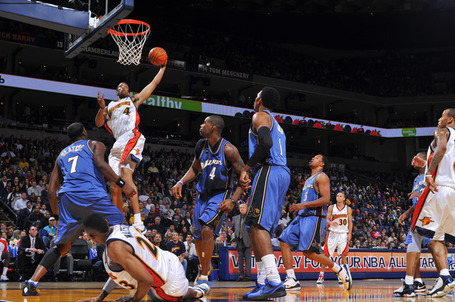 R Dizzle - Hooray for Halftime show at the Roarcle! Since this a nationally televised game, there's gotta be a good show, right?

R Dizzle - There's no halftime show. What the hell man. 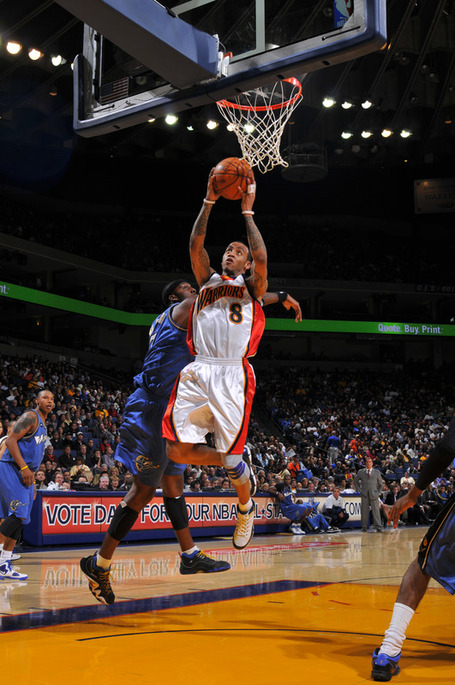 R Dizzle - Ha ha ha. You were there for 4 years before me fool.

R Dizzle - Word. So what are your thoughts about Randolph?

DJ Fuzzy Logic - No like, literally trippin. Falling. Somehow he manages to end up on the ground every game.

R Dizzle - Man, that faceplant into the court must have hurt. Maybe he should start wearing a helmet or something.

Later in the game

Fantasy Junkie - Definetly. Enjoying being back at home and at the Roaracle?

Fantasy Junkie - Right, but you can't come to games wanting to watch the Warriors. You have to appreciate the other team.

Fantasy Junkie - Yeah so when I went to the Magic game I wanted to see Dwight Howard and Vince Carter.

R Dizzle - Oh I get it, so tonight, I should be appreciating GILBERT ARENAS' ALMOST 50 POINT PERFORMANCE.

Even later in the game

R Dizzle - Olympic Mike! Great to meet you man and I'm really glad to have you a part of the GSoM team!

Olympic Mike - Thanks man, great to be around.

R Dizzle - So I gotta ask you, I'm doing the recap tonight. Any suggestions of what to write about this so called "game?"

Olympic Mike - Hmm...I read your stuff enough to know your style. How bout another CONVERSATION RECAP? 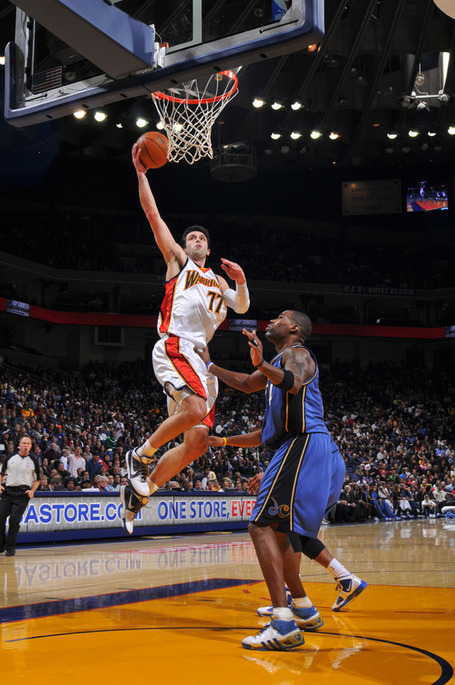 Some random amount of time later

R Dizzle - Feltbot! Another new edition to the crew!

R Dizzle - Good to meet you too. So I hear you're a professional poker player.

Feltbot - That's right. Do you play?

R Dizzle - Of course! I'm just as good at poker as I am with writing Warriors recaps!

Feltbot - You're right. You're just as good at poker as you are with writing Warriors recaps. 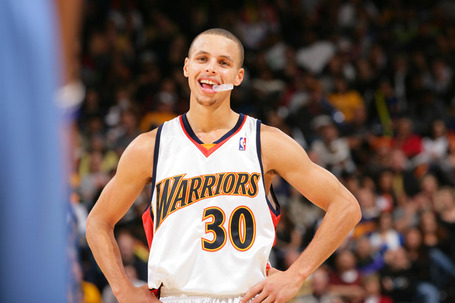 End of the game

R Dizzle - Glad we got this whole thing to happen man....good to be back home.

Atma Brother # 1 - Of course. Good to have you back. Any idea with what you're going to do with the recap?

Atma Brother #1 - Good man. You gonna mention how Arenas and Heyward destroyed us?

Atma Brother #1 - How about how Monta had those turnovers? Randolph had moments that showed his potential? Curry had the hot hand at points in the game?

R Dizzle - Naw, again no need for that. I will say that Curry is the man and I would love to get his jersey as a birthday present. (HINT HINT!)

Atma Brother #1 -Then what are you going to do?

R Dizzle - I dunno...I think I'll have something quick in the morning. I mean let's be real - who wants to remember this game anyway? 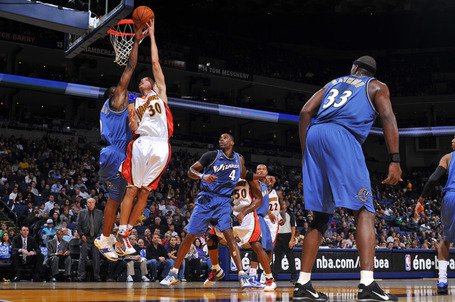 To us, the Golden State of Mind CREW!