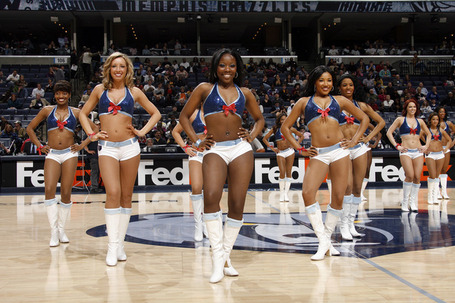 The battle of the Randolphs quickly gave way to what I saw as a bigger story line: life without Monta.  No, this isn't about the trade rumors circulating about the Warriors supposed liquidation, a liquidation that might be equivalent to a dollar store going out of business.  But with ZBo's domination not just of Randolph but almost everyone who tried to guard him, the second quarter Grizzlies steamrolling of the Warriors with Monta sitting out with foul trouble made me think, "If the Warriors traded Monta, this team might be really difficult to watch...even more so than they can be now."  The 15 point swing that ended the half with the Warriors down 10 showed us some troubling signs about the current make-up of this team.

This isn't to say that Monta is our savior or that he's completely untradeable.  You can tell by watching the last few Warrior games that the team is a complete work in progress as we're beginning to see different players take on different roles with and without the ball.  But watching a game where Monta didn't log 40+ minutes shows us how much more work this team needs to put in to stay competitive with or without Andris Biedrins, Ronny Turiaf, and Kelenna Azubuike. 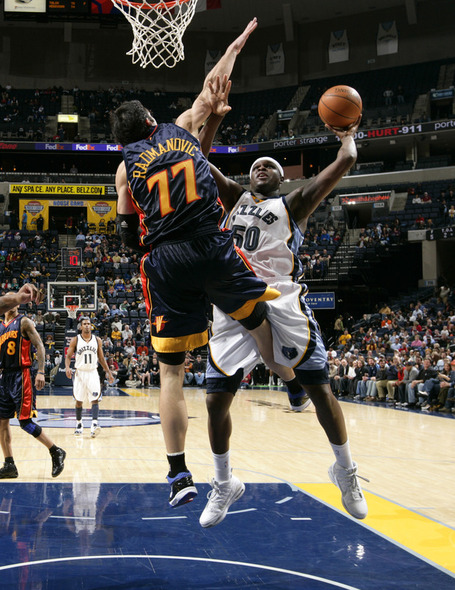 (A kick to the groin couldn't stop ZBo!  He is unstoppable baby!)

Life without Monta in the second quarter showed us what happens when your team is comprised mostly of unseasoned rookies, bloody-raw talent, and bargain bin players.  Don't get me wrong, the Warriors, for the most part, are all lovable and have potential if they figure things out.  But the second quarter domination, which we should just called "Z-Bo time," showed the quick unraveling of this team without a clear floor leader to corral the troops.

The second quarter seemed to sum up all that has gone wrong: a stalled offense with very little movement, slippages in defensive intensity, poor perimeter shooting, and even worse interior defense.  ZBo was literally unstoppable as no one was able to put a body on him.  For some reason the green-light came on and he just continually attacked at will (33 points and 6 offensive boards).  Both DeMarre Carroll (+25 what!??) and Sam Young out muscled and out hustled Anthony Randolph and Vladimir Radmanovic on several occasions, with one particular sequence standing out where Sam Young went baseline trying to dunk on Randolph, leaving him sprawled on the floor.  It was nice to see Randolph showing no fear, but it was also disheartening to see the replays of Sam Young bopping Randolph on the head as he tried to throw it down. 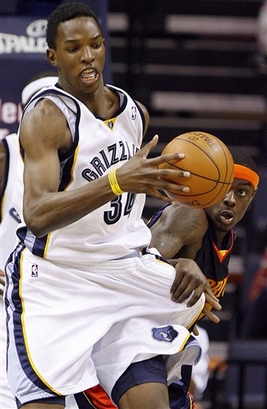 (This is just a weird picture.  I'll let you create your own captions)

But if that wasn't frustrating enough, there were also the frozen half court sets where each Warrior on the floor seemed to want to take 5 dribbles, thinking they could take the man off the dribble, only to pass away when they realized it was futile.  Curry, Morrow, and Watson are all culprits to the idle dribbling and poor shot-selection that is not making good use of the shot-clock.

What happened to the give and go between Maggette and Curry in the first quarter?  What about the one play in the first quarter that was replayed about 5 times where Monta set up Curry who set up Hunter who set up RadVlad for the dunk?  I understand that teams learn to make adjustments but it seemed like once Monta stepped off the floor, this team struggled to initiate anything, even if Monta wasn't the sole initiator of the offense to begin with?  Is it a confidence issue?  Is the team trying to find a way to score and be effective even if their leading scorer isn't on the floor?

At any rate, the game was difficult to watch.  It wasn't necessarily difficult to watch given how much they struggled. It's difficult to watch given how you can visibly see a lot of frustration in the body language from almost player and you wonder if this team even likes each other.  At one point in the first quarter, RadVlad threw up his arms when Monta directed him to clear the side.  When a poor offensive sequence happens, such as Randolph chucking a 20-footer on a fast break which clangs hard off the back iron, you can see Curry in the corner of the screen with his shoulders slumped for a second as he trots back on defense.  The typically stoic Monta Ellis has become extremely riled up to the point of looking like he wanted to fight the ref after getting called for a foul, only to have Chris Hunter bear hug him.  It's clearly a team that's struggling and it shows.  As calm as Anthony Randolph looks on the court, I also feel bad for him as he's always falling on the ground getting hammered inside by multiple bigs.  I mean, it's his job to defend the hoop, but at some point you just feel bad for a 20 year old who wearily gets up after getting banged around by men like Marc Gasol, Sam Young, and ZBo.

I'm not quite sure why I feel so sorry for the Warriors, but I do.  And I want to be supportive as they navigate through the inconsistencies that come with increased injuries.  For instance, today it was nice to see Chris Hunter finally showing us what he can do on the offensive and defensive end.  His size, length in the interior was impressive as he bodied up bigs like Gasol and Randolph (in the first quarter at least).  This all leads us to ....

I'm going to give it up to Chris Hunter.  Not just because he was statistically impressive (14 points, 6 boards, and 3 blocks) but he also hustled a bit tonight too.