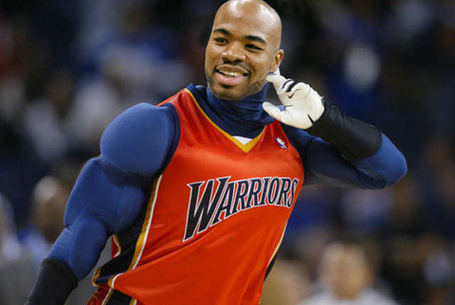 From Marc Spears over at the Y!:

Golden State Warriors general manager Larry Riley said he is weary of all the trade rumors hanging over his team and claims he is not shopping any player - despite rumblings throughout the NBA indicating otherwise.

I'm calling bluff. Riley's a sharp man, at least sharper than the Warriors last few GMs. He knows this roster needs to be blown up. I wouldn't be surprised if he was paying serious overage fees on his cell phone plan the past month making and receiving trade calls.

One NBA executive said the Warriors are "trying to unload" forward Corey Maggette (no surprise, given his mammoth contract) and would trade young forward Anthony Randolph for "the right veteran."

Both of these SHOULD be happening right now.

I like Maggette's game more than most and appreciate his uber-efficient scoring off the bench, but throughout his career he's been 1) injury prone (his annual injury bug is coming) and 2) missed the playoffs all but once in his career (doesn't exactly play "winning" basketball). There's plenty of good arguments that Chris Mullin and Robert Rowell really overpaid him post-Baron Davis departure.

Also let's face it- fans do not come out to watch or like watching Maggette play. Sadly many members of the best fans in the entire association have even resorting to booing him. I'm not a fan of the booing, but about a quarter of Dubs fans think it's okay to boo him just because they don't like watching him play- see Polling GSoM: Do Warriors fans need to stop booing Corey Maggette?

"There is a lot of conversation right now," Riley said. "I'm looking around as a GM of a team with seven wins. But there is no shopping of any player. I've followed up on things, but we're not shopping around.

"I did not shop Randolph this year or last year. We have guys that we are not willing to trade."

But the Warriors should be shopping! Washington Warriors shopping perhaps. I'd take a shot at Gilbert Arenas, Antawn Jamison, and Caron Butler. It would be an expensive shot, but it's not the like Warriors have much to lose at this point.

NEWSFLASH: Any 2010 salary cap space this team has is either not going to be used or "utilized" to overpay another regrettable signing a la Maggette.

Selling on Morrow and Curry right now wouldn't be the best idea. You have to expect these two to keep improving. On the other hand, selling on Ellis right now might be a wise move. It would be selling high while he's putting up 25ppg, 4.3 rpg, 5.0 apg, and 2.3 stls, which look fabulous on paper. Never mind that his scoring hasn't been all that efficient and he's turning the ball over at a ghastly rate (4.3 a game! Egad! Good lord!). Some sucker GM is going to see those totals and not adjust for efficiency. Now might be the time to sell high on Ellis. I'm not saying do a salary dump by any stretch of the imagination, but Ellis is clearly the Warriors most valuable tradable piece right now.

Marc also has an update on the Warriors super mediocre center tandem that the homers seem to think will make a world of difference on the team's win-loss record:

For now, the Warriors hope big men Andris Biedrins and Ronny Turiaf are able to finally return from their injuries and play Saturday against the Phoenix Suns.

Let's hope these guys don't have too many early struggles when they come back. Both of them are great trade pieces. Biedrins can help a playoff team with his elite rebounding. Turiaf can give a playoff squad some good minutes o' swats and hustle off the bench. Neither have won anything at all with the Warriors and that's not going to cease.

If either player returns, the Warriors likely won't seek a second injury exception to expand their roster.

Man, but BOOM GOT THEM DOS! This isn't what I wanted to hear.

Now I tend not to place all that much blame on GM Larry Riley and head coach Don Nelson for this team's current horrific roster. They haven't had full control of this roster since mid-June, so it's really been less than 6 months. They inherited a major clean up job thanks to the silly moves made by Chris Mullin and Robert Rowell. Riley and Nellie aren't going to make the bonehead moves that these two unqualified and not so bright "executives" made when they were calling the hoops shots.

But the time is ticking and Riley and Nellie are on the clock. If the Warriors start next season with the same roster they have now and sell the fans on the company line that this flawed roster will be fine when healthy, then it's time to hit the PANIC button. They didn't earn their paychecks.

Riley and Nellie are better than that... I think.