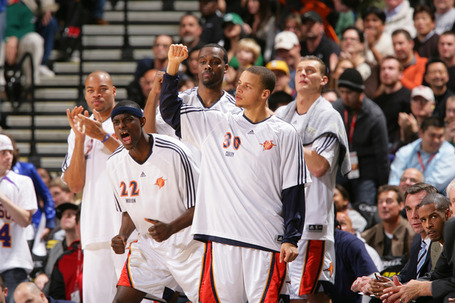 No way, said I. No way could the Warriors with an injury depleted team defeat the likes of Rajon Rondo, Kevin Garnett, Ray Allen, and Rasheed Wallace. We got lucky the other years. A buzzer beater by Baron two years ago? A fluke of a game last year?

Man, oh man, do I enjoy being wrong. 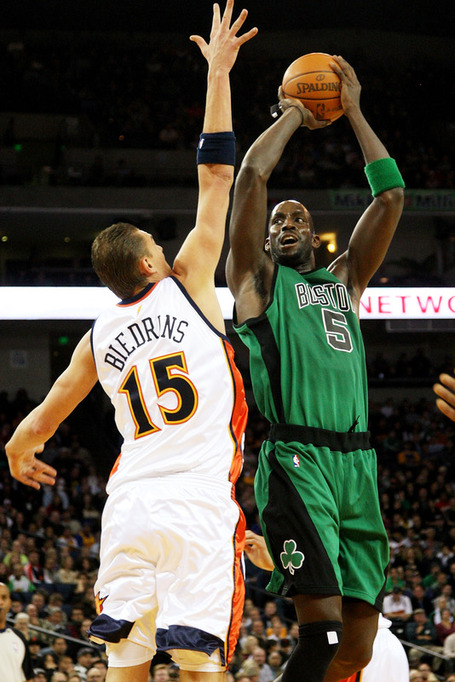 It's hard, real hard, to make a judgement call about his play last night. On the one hand, it was awful, shooting 0-4 ON SOME EASY SHOTS, but on the on the other hand, he was coming back from a major injury. For some reason or another, good ol' Coach Nelson thought it was a great idea to start him and The Radman together at the begining of the second half while we were ONLY DOWN 1 POINT.

Note to Coach Nelson - PLEASE DO NOT PLAY ANDRIS AND THE RADMAN TOGETHER. THANK YOU.

He just couldn't match up to KG or Kendrick Perkins. Both pretty big guys that hustle and play hard. So, that's fair...I guess? I don't know. Not really good to have your franchise center unable to play against the elite guys...

Anywyay, good to have Beans back, glad he got a roaring ovation, but let's hope he does better against the Lakers and Pau Gasol. 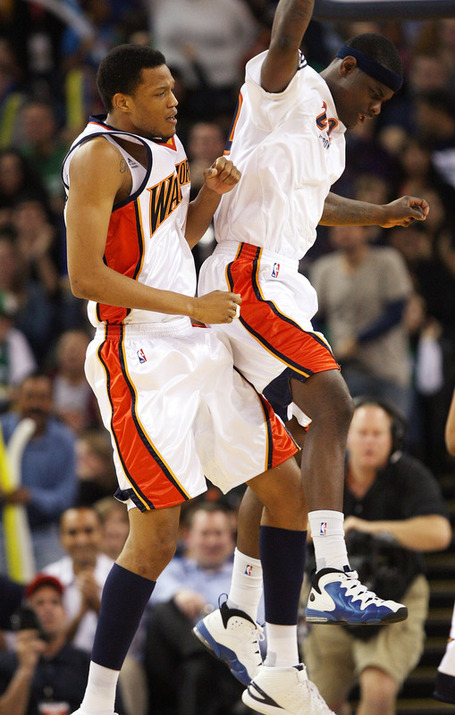 Can you say "awkward?"

Yeah I just quoted Lady Gaga (stupid kids and their music...) but that's what it is with this kid - a bad romance. One minute he's throwing down the thunderous jam, the next he's throwing a wild pass into the stands (that went faaaaarrrrrrr), the next he's grabbing a monster board over KG, and then he finishes it off with a dumb dumb dumb dumb DUMB shot from right next to the threw point line.

As Atma Brother #1 put it so eloquently last night,

There's a reason they're leaving him open on that shot.

It (whatever you want to refer to "it" as) is there - it just needs to be refined. At this point we can't make some silly claim like Lamar Odom and dub him a "Future Hall of Famer" or even the "next KG," BUT we can say this - he can be incredibly effective and efficient in limited minutes. In a big game like this where we stayed close, it was a wise decision for Coach Nelson not to play him all game. 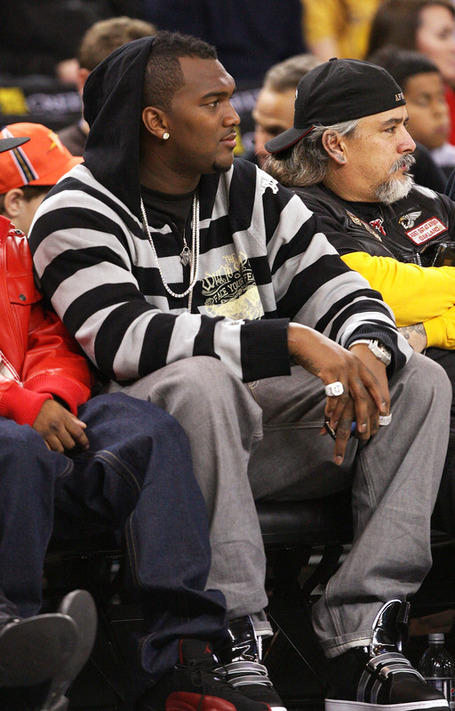 I'm starting to feel sorry for this guy...

That just sucks. I'm not a Raider fan or anything, but come on guys...booing your "Quarterback of the Future" at a Warriors game? That's kind of low...
That would be like me booing Alex Smith if I saw he attended a Warriors game. Oh wait, I'd do that. Nevermind, carry on.
Ray Allen 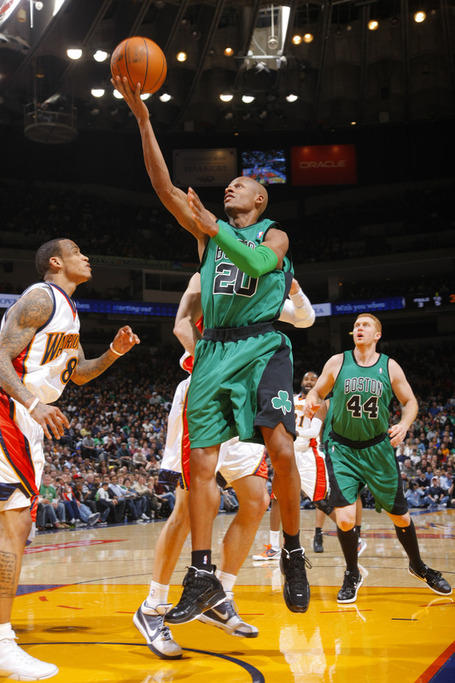 Coming into tonight, I had never heard of this guy. Ray Allen? When I first saw an "Allen" step on the court, I thought it was Tony Allen. Boy was I impressed! This guy's got one of heck of a shot! Man, his stroke might be smoother than Ammo's! Wow man, wow.

Now I get that he's got a pretty good shot and can apparently score (24 points - wow) but I didn't qute understand why Coach Rivers decided to give it to him on the last few possesions when the game was on the line. He missed a critical 3 pointer AND messed up his free throw shots (didn't hit the backboard).

Really, Ray Allen? Come on man...give it to someone who can actually play in crunch time.

Ray Allen...name sounds so familiar...wasn't there a Ray Allen in a movie with Denzel Washington? 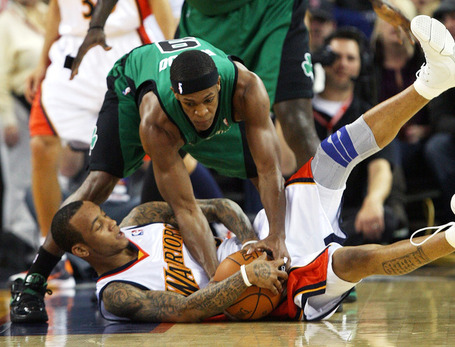 37 points doesn't really seem all that spectacular with Monta these days, but they came at clutch moments. He drove hard, played hard, and showed INTENSITY. Like KG intensity. Taking down 5 straight points to end the 3rd quarter (with a surprise 3 pointer) was no joke. Finishing the game with clutch free throws showed his development as a player and as the team leader.

"I felt the energy when I first came in the gym," Ellis said. "The last two games there's been something different. When you feel that energy, you've got to give the crowd something to cheer about."

Let me speak a bit about that "different feeling" Ellis got at the Roaracle the last two nights. Where did it come from? FROM ME! Yeah, I'm taking credit for it. In my first 2 games (I won't count the Wizards game seeing as though I wouldn't credit it as a real NBA game) back in the Roaracle, they won. Beating the Suns and the Celtics is no joke and you can credit to the man sitting in Section 107, Row 8, Seat 5. R Dizzle. Feel free to yell at me if we go on a losing streak til I come back.

I could be selfish and continue to credit myself for the victory. Instead, I'm going to bust it over to the Thief of the Night. 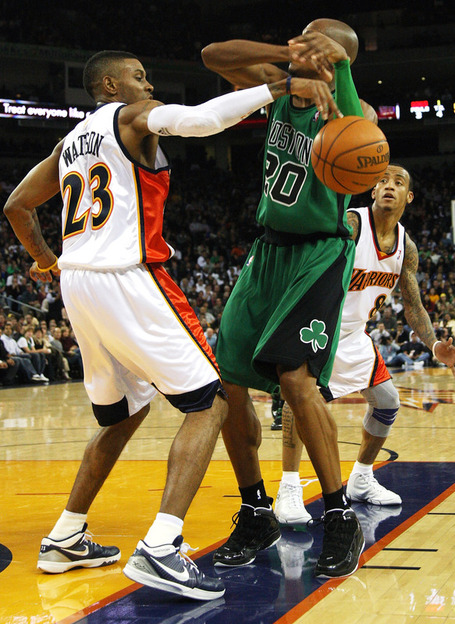 6 Steals in ONE QUARTER is absolutely absurd. Couple that with one more steal (7 total), 11 points, and 7 assists and you have one heck of a game for Mr. Watson. By no means am I going to make some silly claim like CJ's the best guy on our team, but he's been playing well, VERY WELL, for an undrafted player that we pulled out of the D-League.

if you haven't already, jump of to Tim Kawakami's blog to see the good word about my main C.J. Watson.