We'll be kicking off the new decade over here at GSoM with a throw back in appreciation of the "golden years" of suck for tChris Cohan's franchise: 2000-2009. It came, it went, and it amounted to one playoff appearance.

But man, did the Warriors make an appearance in the playoffs in 2007. 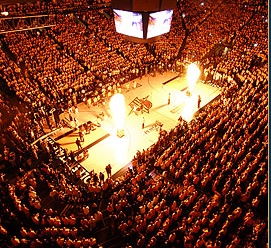 Quite an appearance I must say.

Anyhow we're going to start things off right with the purest form of a fan vote possible. It's time to vote for your favorite Golden State Warriors player of the past decade. Don't waste your time with the stats or wins (those silly little W's we don't care about 'round these parts!). We'll do that on the other All-2k Golden State Warriors polls, but this is one is purely about picking who repped the soul of Dubs fans. Nothing more and definitely nothing less.

For a fanbase that really hasn't had all that much to root for in the past 16 years, but is still ridiculously passionate about Dubs hoops this vote is special. So my golden friends- the vote is yours but I beg you to promise me that the Warrior you select embodies the "UNSTOPPABLE BABY!" in some major way, shape, or form. Make your case in the comments.

JUMP for a little bit about each nominee. 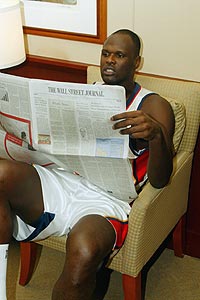 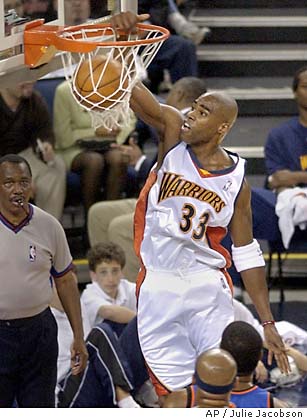 I still can't believe I found a pic of 'twan dunking.

Claim to All-2k Dubs Soul: Back-to-back 51's and one great, goofy smile despite all the losing. 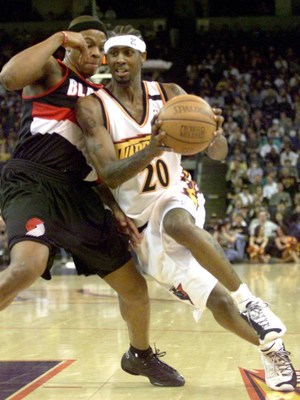 Back then I honestly thought he was going to be a superstar some day. 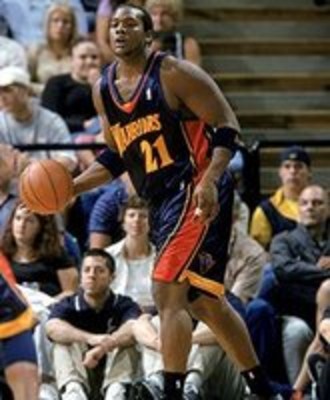 Round Mound of Rebound Part 2

Claim to All-2k Dubs Soul: The Fort almost lead the league in rebounding during the 2000-2001 NBA season with the Warriors inhaling 11.7 rpg. It was especially stunning considering that 3.8 offensive rebounds in that total were all off of his own misses. 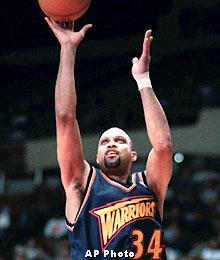 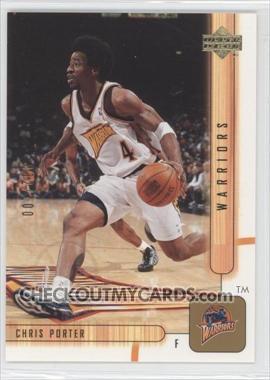 I bet if he trimmed his hair a little, he would have been as fast as Monta Ellis.

Claim to All-2k Dubs Soul: I won't lie. You can smell the ganja in the rafters of the Roaracle at plenty of Dubs home games. Let's just stay it wouldn't be too surprising if Porter was stashing a joint in that lovely 'do. Warriors fans and Porter have that special connection. 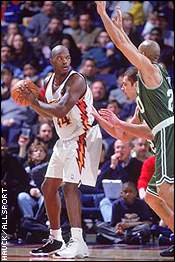 Living proof that the 2000 NBA Draft class was one of the worst of all time.

Claim to All-2k Dubs Soul: Nearly winning the 2000 Rookie of the Year honors is something, but providing the official motto for Golden State of Mind is something else:

Golden State Warriors rookie Marc Jackson to the Mavericks' bench, after hitting a lay-up during a 29-point loss (2000)

Marc, not Mark will forever be in the GSoM lexicon. 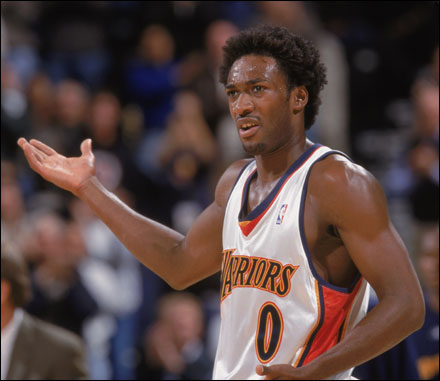 Bonus points for the mini-Chris Porter 'do.

Claim to All-2k Dubs Soul: Before he was the popular character in the nation's capital he was a crazy up and coming popular character here in the Bay. Plus he gives us another reason to bash the worst owner in all of sports Chris Cohan- seriously man, WHY DIDN'T YOU LOOK GILBERT IN THE EYE? 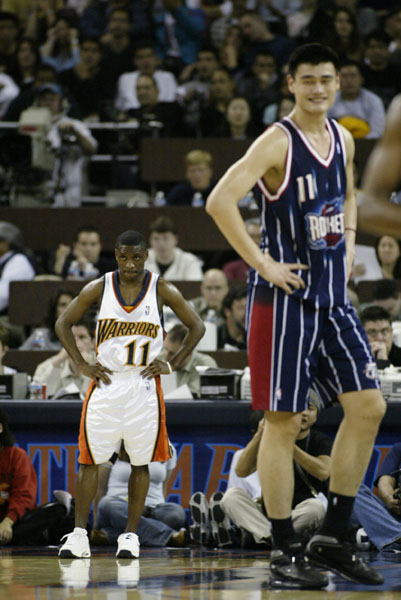 I thought you knew- Warriors come in all sizes.

Claim to All-2k Dubs Soul: Earl was the the Dennis Eckersley of the Warriors 2002-2003 squad (arguably the 2nd most entertaining behind the WE BELIEVE 2006-2007 team). He can also kill an elephant... that's right, an elephant. 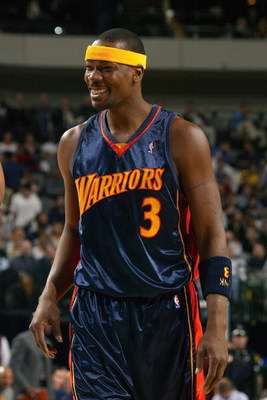 Uncle Cliffy remains one of my favorite hoops uncles.

Claim to All-2k Dubs Soul: They say that all good things come to an end and Uncle Cliffy came to the Warriors in 2003 with a 14 year playoff streak that was ended (fairly easily) that season. 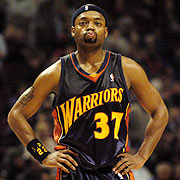 Claim to All-2k Dubs Soul: His stay in the Bay was brief, but he was good for a few clutch moments. 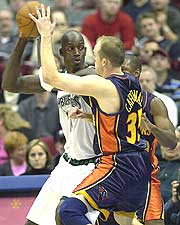 Claim to All-2k Dubs Soul: Who can forget The Custodian? There sure was a lot to clean up on the Warriors- still is. 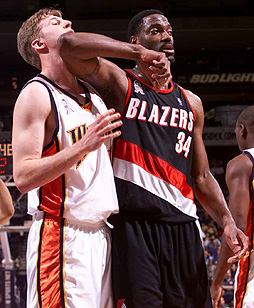 They were actually teammates not too long after this classic show-down.
Claim to All-2k Dubs Soul: Before he was Charmin soft, he was staring down Dale Davis. We all miss that T.R.O.Y. 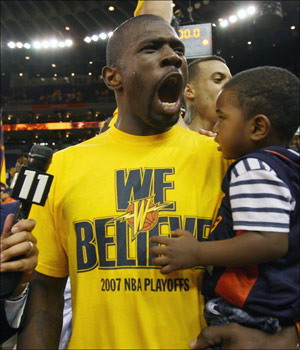 WE BELIEVE this will be the winner of the All-2k GSW Fan Fav.

Claim to All-2k Dubs Soul: Winning 2 dunk contests and making Warriors fans proud during a very dark, dark era of GSW hoops and taking out a full page ad in the local papers (yes we actually used to read newspapers just a few short years ago) apologizing for missing the playoffs at the end of the 2006 season and then helping lead the Warriors to the unforgettable WE BELIEVE. Quite the Warriors All-2k soul is you ask me and that's why J-Rich gets my vote. 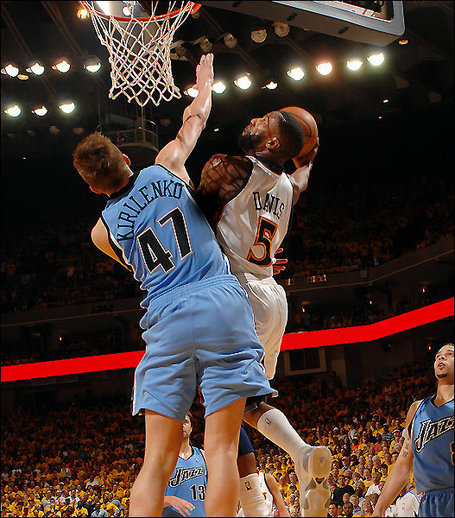 Eddie Murphy in Coming to America: "IN THE FACE!!"

Claim to All-2k Dubs Soul: In a decade of Dubs sub-par rosters (to put it lightly) he was the team's best player. He was also one of the few players this organization had this past decade that could actually dribble.

DO YOU BELIEVE NOW?! Yes we do Boom Dizzle. Yes we do. 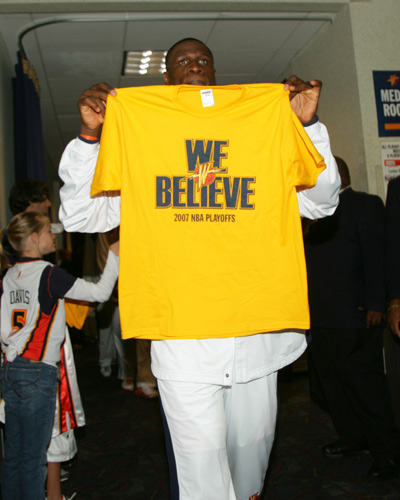 Claim to All-2k Dubs Soul: Just a lovable and goofy guy all around. 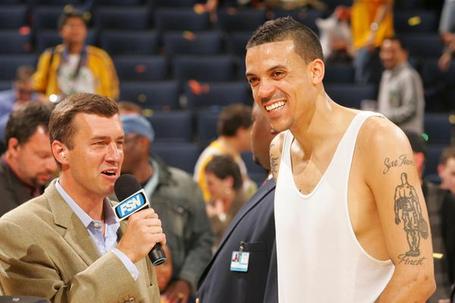 We couldn't have done it without the mohawk. 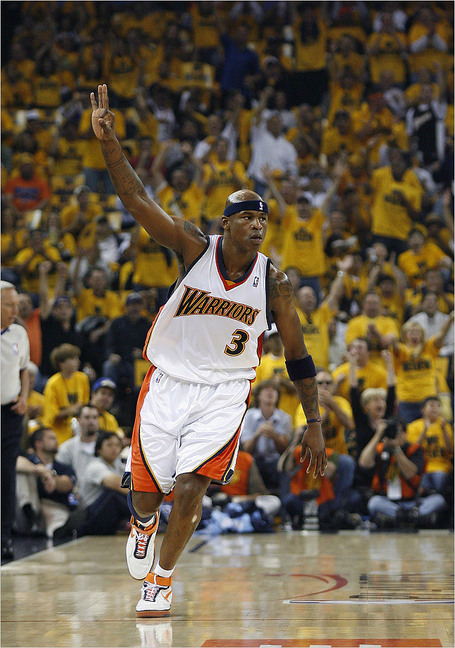 It's really too bad it didn't work out. Al seemed like a cool dude.

Claim to All-2k Dubs Soul: Sure he struggled in the 1st round against the Dallas Mavericks, but if it wasn't for his amazing DEFENSE on the likes of Yao Ming, Pau Gasol, and other bigs in the final stretch the Warriors wouldn't have even made the playoffs. Baron, Monta, J-Rich, Jack, and Al- the fastest and funnest Warriors starting 5 of the decade. 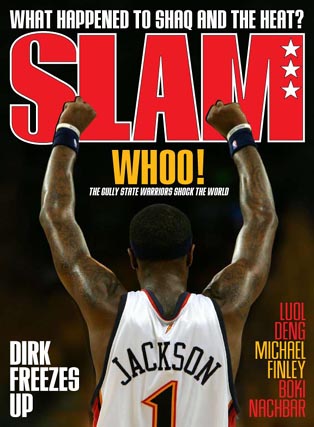 Claim to All-2k Dubs Soul: Back in the 2007 NBA Playoffs and WE BELIEVE this guy and his gun check pre-game routine with Matt Barnes were absolutely wild- just like the Roaracle contingent. Good times. It's really too bad the man went out with a childish tantrum, but hopefully that bitter taste will vanish from our collective hoops memory in a few years. 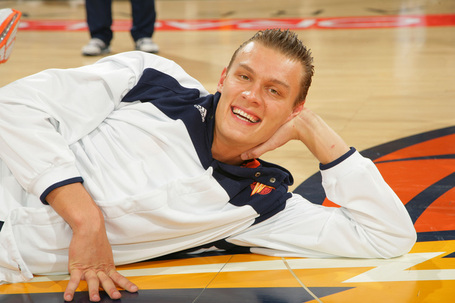 Claim to All-2k Dubs Soul: Double-double with the cheese. 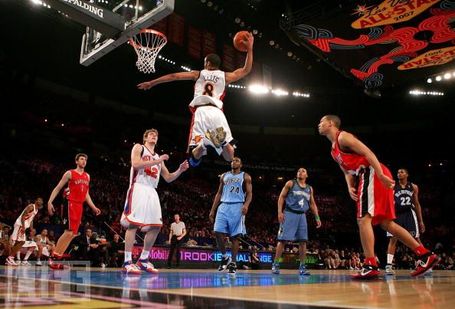 Who could forget Monta's grand entrance on the national stage back in 2007 Rookie-Sophomore Game?

Claim to All-2k Dubs Soul: Before there was Moped Gate, there was Ellis... TO THE RIM! 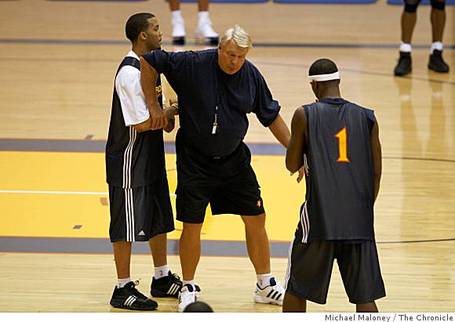 I wonder what Nellie and WIlliams did in... PRACTICE? PRACTICE?!

Claim to All-2k Dubs Soul: You might want to check where your laptop is right now... I'm just sayin'. 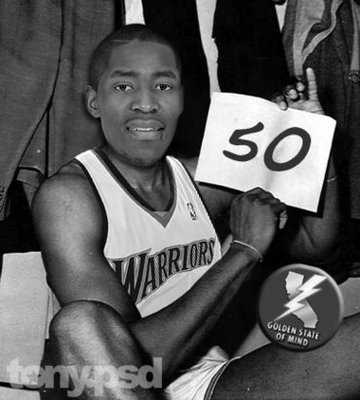 Claim to All-2k Dubs Soul: Because of it signified what life was going to be like post-WE BELIEVE for at least a few years the 2008-2009 season gets my vote for worst Warrior season of the decade. JC's 50 and sick handles gave us something to smile about during the full blown return of WE SUCK. Sure he won the 2008-2009 WWDY, but he seemed like a really cool cat. 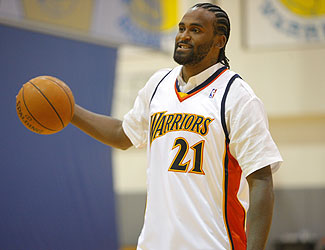 Claim to All-2k Dubs Soul: Even before he got to the Bay he was getting hyphy!

I'm sure I missed a few favs, so drop them in the comments section along with their claim to the All-2k Dubs Soul.

All of these former/ current Golden State Warriors are deserving of the All-2k Dubs fan favorite honor, but who gets your vote for Warrior Wonder of the decade?

For more Golden State Warriors history make sure to flip through the GSoM History section.

See you in TWENTY TEN. Here's to another decade of the Warriors being... um, Unstoppable Baby!