Share All sharing options for: RECAP: Warriors 118 Magic 126 - So much for my early XMas Present 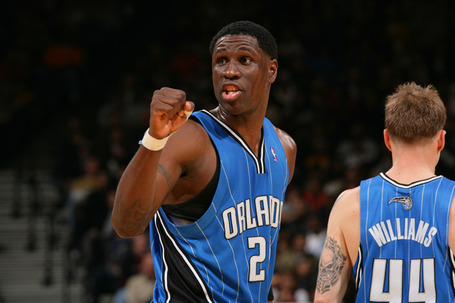 Where you at Ronny? We got a dance off coming after this game!

Oh Warriors, how you break my heart. I gotta be honest - I wasn't even going to watch the game. I was just going to watch the replay today (Sunday) on League Pass, fast forward through the Magic dominating us and then come up with some kinda recap.

You can't blame me for that. Let me go back and take a quote from my preview.

So I went on with my night...did what I had to do. Like an idiot, I decided to briefly check the score during the 2nd quarter.

Surprise surprise R Dizzle. Box Score at that point? Nothing out of the ordinary. Monta with the most points, AR just got in and did a few things, Vlad Rad looking half decent.

But there was an interesting number. Dwight Howard like 3 fouls already. Weird. Maybe we were doing something right? Getting him into foul trouble early? Gortat too? 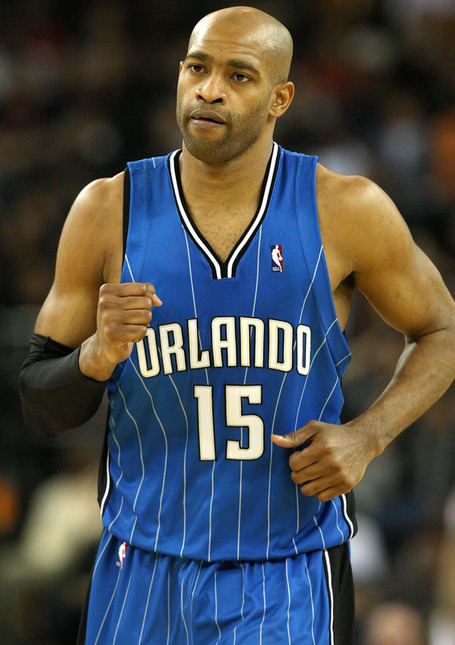 The Magic kept scoring more 3's at a rate faster than I was eating Xmas Cookies. We had no chance. None at all.

So I said "whateves." Got back to the task at hand. Decorating my Xmas tree. It was dope. I had warm hot chocolate (what else would it be? cold hot chocolate?), the N Sync Christmas Album playing in the background, cool ornaments and I was hanging with a lil special someone.

You gotta love the holidays! Fun filled times. I mean jeez, look at my tree! (I got rhymes son!) 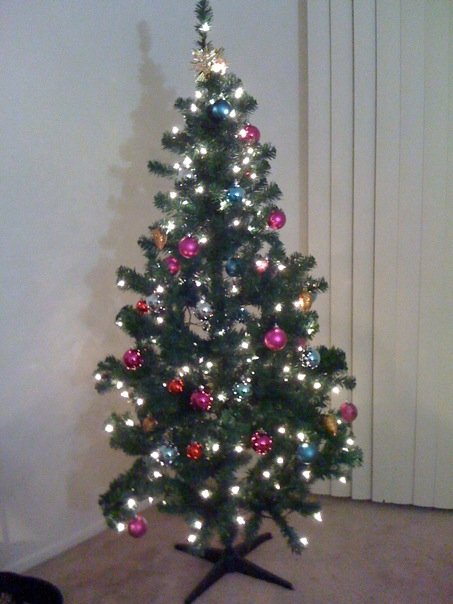 But something was missing. The night wasn't right. I had to be honest with myself. I can't just "not watch" the Warriors because they're guaranteed a loss. No, I must enjoy the bad times, I must find some pleasure in it all.

So I turned it back on at the beginning of the 2nd half. Something was different this time around.

Sure Monta was doing his thing - playing at an All Star level. Vlad Rad was doing his thing. Curry was getting his Butter on (Butter Chicken anyone?) and handling the ball silky smooth. But there 2 things that stuck out to me at that point.

1. Dwight and Marcin were in foul trouble.

Very key. Without their two big men, they were forced to play Brandon Bass at center. We didn't really have one at the time (don't try to tell me that Mikki Moore or Chris Hunter are great substitutes) so we could play small ball.

Yes, classic Nellie ball. Put a 4 at the 5 position (Vlad Rad) a 3 at the 4 (Corey Maggette), put in guys that "have the ability" to score (Monta, Randolph, and Curry) and run run run run run. 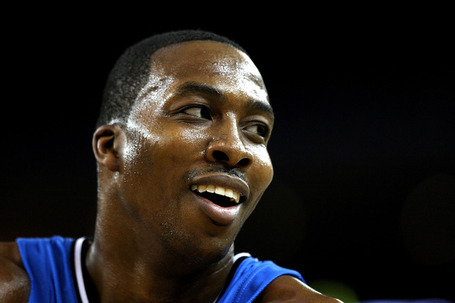 Define different you say? Can't put my finger on it. Something was just..."different." Sure I can throw out numbers but really, what difference does THAT make? It can't really describe what was becoming of Mr. AR. It was just "different."

Maybe finally living up to his "potential?" Not being "out of control?" "No one on the corner had swagga like him?"

Who knows - but at least he wasn't being his usual "Tigger self."

I had to watch the game. I just had to. I had a feeling, or was it more than a feeling, that I had a chance to see something special. Let me quickly summarize what I said in the next 15 minutes of my life.

"We have no chance."

"Wow that was pretty."

"NO way is this happening."

"No, really, NO WAY IS THIS HAPPENING."

"Where has been all season?" 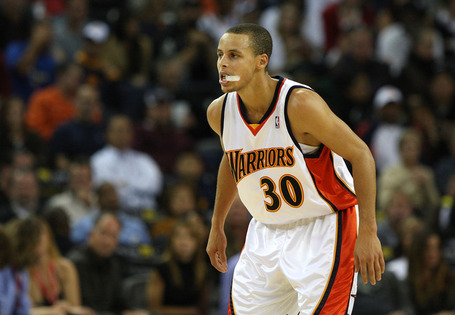 It was happening. Monta Ellis was playing at an All Star level. He was leading the team. Curry was getting his PG on and handling the ball well. Corey Maggette was slashing in the line, playing strong. But most of all - Anthony Randolph was becoming something special right in front of our eyes.

I was going to be able to put my first present under my new Christmas tree. I was going to see the Warriors do the impossible again. I was back to believing. 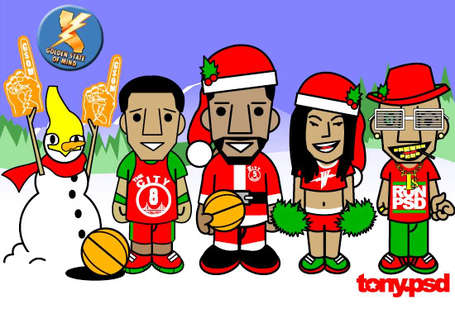 IT WAS GOING TO BE AN EARLY CHRISTMAS.

But no, I was wrong. Not too get too depressing but essentially things didnt' come together. Call it being a young team. Call it being inexperienced. Call it playing against a better team.

Whatever you want to do - truth of the matter is we got destroyed in the last 5 minutes. The Magic made it one "Magical" night.

Hey, but like always - let's refer to the one thing I had right in my preview.

Thanks for NOT giving me an early XMas present guys...

But hey, one question. How in the world did Matt Barnes for from this 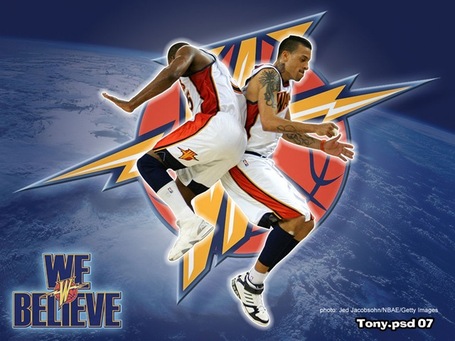 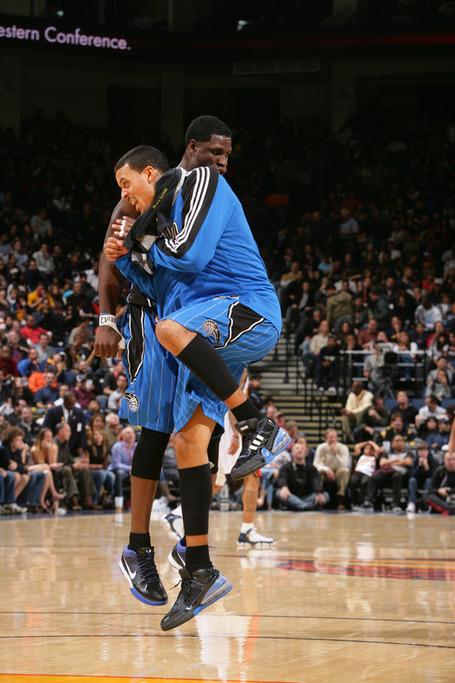 Two things popped out to me from AR in this game.

Seriously, when is this kid going to be happy? He was scoring left and right, making crazy passes (that dish to Monta was nuts) and he still looked like he was about to cry.

The only time I saw him smile was after he fouled Matt Barnes in an attempted block. 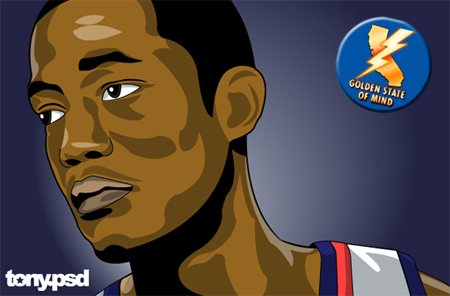 Yeah great stuff. We all know where the hype is and what it's about. But please just do me one favor. For my Christmas gift, just please make sure that

FOR THE LOVE OF GOD YOU DO THIS AGAIN!!!! 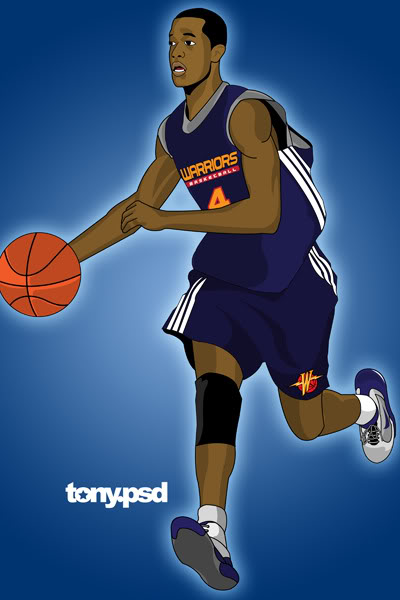 IT'S ALMOST TIME FOR THE HOLIDAYS!! YAY!! 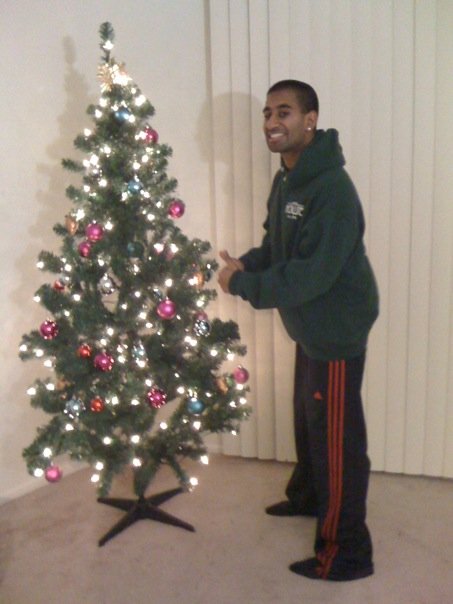 All about Holiday Cupcakes!