Share All sharing options for: RECAP: Warriors 88, Thunder 104 - More of the Same.

What a depressing display. This Warriors team is getting tougher and tougher to watch. Every time they show us a glimmer of hope in one form or another, they offset it by 2 debilitating actions. There is no two ways about it; we are moving backwards. Our players can't stay healthy, what's left of them can't string plays together; we are giving ourselves no chance to form any sort of team cohesiveness.

With the way the Thunder played tonight, they shouldn't have beaten us. They came out with a pretty poor game by most standards, yet they beat us by 16 points? Things are upside down in the world of the Warriors. Up. Side. Down.

Polling GSoM: Will the Golden State Warriors lead the league in turnovers this season? 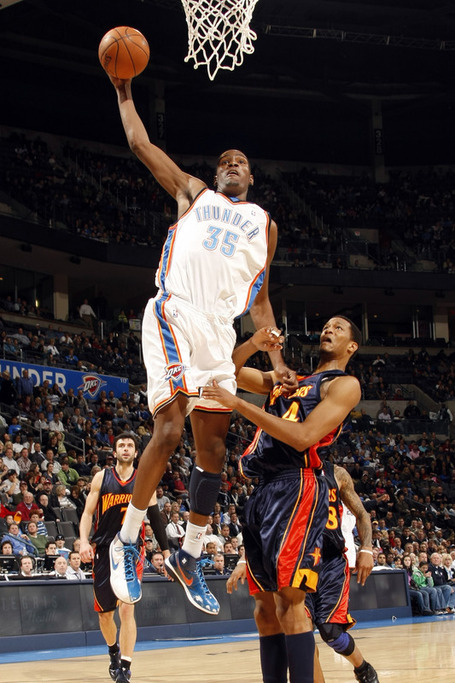 Freakin' wingspan of a pterodactyl on this guy...

Let's make this short and sweet. Hit the jump and let's take a look at some of the factors that led to another disappointing loss.

I have to say, the first half of this game really wasn't that bad. Granted, I might be jaded because the stink of the second half is still in my notsrils, but in the beginning the Warriors did a pretty solid job on the defensive end. This is something we simply don't see from this team, so it was refreshing to see our boys in the paint, knocking the ball lose and actually guarding jumpers. In the first quarter alone, the Warriors forced 9 turnovers and, despite a bucketful of turnovers ourselves, managed to close out the quarter up one point.

As we made our way into the second; that's when things really started to turn ugly. Amazingly enough, the strong D still maintained, but our offense melted away into the all too familiar one on one stop and pop shots. With our lethargic offense taking center stage, the Thunder tore off on a 14-0 run.

Our improved defense was the classic example of the Warriors putting something good on the table in exchange for 10 things bad. Today, where our defensive cylinders were firing, the Warriors gave up a ridiculous amount of points off of turnovers and allowing the Thunder to grab offensive boards. It was only by the good graces of their poor shooting that we ended the half down by only 1.

The third and fourth quarters? Man, I don't even want to talk about them. That might have been the Warriors at their worst (offensively speaking at least). It literally got to the point where Monta and, to a lesser degree Curry were the only two who could seem to score buckets. There were enough bricks from the Warriors in these two quarters to build a 3 story house. Add to that equation Maggs getting himself ejected for no reason and we ended up in the worst possible position in this game.

If not Ellis, then who? While his game wasn't it's finest, there's no denying that Ellis was the only one who got things moving on an offensive side. And trust me, I do have conflicts about doling out the WW to someone who got 9 turnovers. So I'll at least tip my hat to Curry for dropping in a solid 22.