OPEN THREAD: Warriors vs Knicks - A Welcome Back

Share All sharing options for: OPEN THREAD: Warriors vs Knicks - A Welcome Back

Wow, adding a little more fuel to the fire in the pre-game press conference. From Kawakami's transcript: Al Harrington, pre-game on Don Nelson: "He’s been known to ruin guys’ careers"

Anyway, when asked by a couple of New York reporters about the origins of the break-up, Nelson immediately repeated what he has said for a while–it was all about Harrington’s desire for more money and to be featured more in order to get a larger deal.

Nelson said that it was Al, not Nelson, who made it personal.

When we all tracked over to the visiting locker room–hey, I was going over there anyway to talk to Al–and the NY guys relayed the Nelson "made it personal" answer, that got a quick, loud response from Harrington. "Wow!" Harrington said. 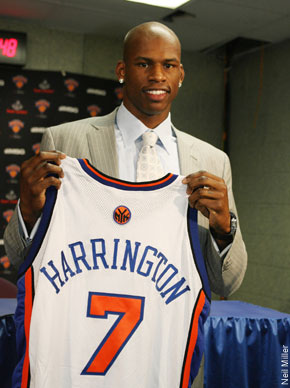 Welcome back Al Harrington! Something tells me Al's not going to get the warm reception that former Warriors, Jason Richardson and Matt Barnes received when Phoenix came to visit just a few days ago. Perhaps when you fake an injury, play below the level of play you know you're capable of playing, complain about how you're being used, and essentially force your way out, it has a way of making people slightly upset with you.

To be honest, I could live with the poor play, the complaining, and the trade request, but what really grinds my gears is that he lied to the fans (pulled a Monta?). He took FOREVER to come back from injury. He didn't make the Warriors road trip because he was supposedly too injured to play. Then he gets traded and voila, he's playing 27 minutes the next night and then 41 minutes on the back end of a back to back. Doesn't seem like much of an injury.

Here's what I would be doing if I were at the game: