Always an exciting thing to watch the Warriors take on Portland in the Oracle. Maybe it's the energy that so many young players bring to the floor. Maybe it's the possibility of watching Roy, Oden, or both give us a glimpse of our future competition (or hopefully acquisitions) of this league.

Maybe it's the fact that we always seem to win. And just before the All-Star Break, we needed a W under our belts. Count it! 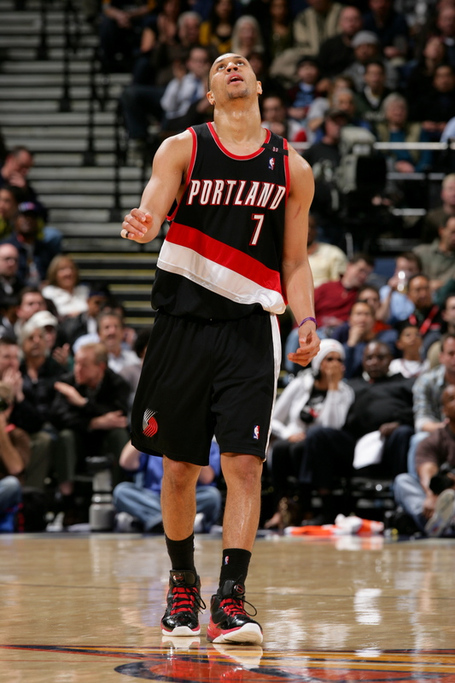 Well it's getting pretty late and I'd like to give everyone a nice little breakdown of tonight's events before coverage of All Star Weekend. So let's take this bad boy quarter by quarter with some nicely organized bullet-points. There was some good, there was some bad, and as always, there was some ugly.

Fortunately Portland cornered this evenings' market on ugly. Shall we?

And that's about that. In the waning minutes of the game, Monta became the Monta we have all grown to love with his huge series of jumpers to keep us fighting to the end. Should we have blown an 18 point lead? Of course not. But we did do the one thing that a good team needs to do with the lead.

That's right. We kept it.

Not bad Warriors. Not bad. ONTO THE ALL STAR BREAK!!!

TURIAF!! Your first double double as a Warrior and, despite a little foul trouble, an excellent showing on all parts of the floor. I can't wait until we have you and Biedrins back on the floor again.

Remember when Foyle was our starting center? What a difference a few seasons can make!