Share All sharing options for: Recap: Warriors 121, Lakers 129 - Further Than It Appeared

Editors Note: Hey! Did you know that yesterday was GSoM friend Chris Murphy's birthday?! For those of you that don't know, Chris has been our excellent partner with the Warriors for putting together the ever so Unstoppable GSoM Nights over the years! So bust out your GSoM Night T-Shirts and drop a happy birthday to Chris in the comments!

I can't honestly call this game a heartbreak. Well, don't get me wrong. Every loss is a heartbreak in some shape or form. But for me, the true heartbreaks are the games where we hold a deserved lead right up until the end, only to make a series of small errors that cost us the game.

A deeper look at the game, however, shows a team riddled with holes. All the Lakers had to do was stay within striking distance and wait. The time would come when they could exploit our flaws and take the lead at the one time of the game where it would actually matter.

I don't need to tell you exactly when that was, do I? 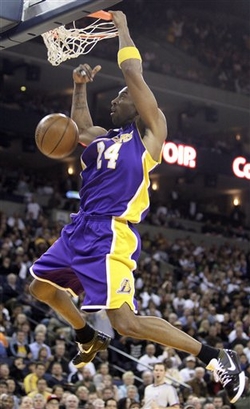 Hey hey hey now. Don't go jumping off of any cliffs just yet. We WERE playing the best team in the league. I think it is important for us to not take that little fact for granted. But for the purposes of game analysis, let's put this behind us. Tonight, the Warriors weren't defeated by the Lakers. They were defeated by themselves.

Well, I guess the Lakers had a little something to do with it...

Tonight's flaw wasn't exactly our turnovers; or at least, not at first. Looking at the game in total, the Lakers did just as poor of a job taking care of the rock as we did. The real difference came from what the Lakers did with their turnovers versus what we did with ours. Namely, they scored. A lot. On us.

The bottom line is, when the Lakers start converting our careless mistakes into countless easy buckets, it's our responsibility to take better care of the ball. We simply did not do that, and as a result, the second half of this game allowed the Lakers to slowly close the gap, take the lead, and, by the end of the fourth, put us in their rear view mirror.

As amazing as our start was to this game, it's really hard for us to keep up that kind of shooting for 48 minutes. Crawford was shooting lights out, Ronny couldn't miss; our boys were literally draining every three that they threw up. No matter who you are playing, it's hard to not hold a lead after a start like that.The amazing thing was watching the Warriors hold onto that lead for three quarters. They did a tremendous job of turning on the miracle shooting every time the Lakers came within reach. Great to see, but no long term formula for consistently beating the big dogs of the league.

The Lakers stuck to using a few more traditional methods to get their buckets against us. Gasol and Odom were lighting us up from the paint while Kobe was... well, being Kobe. Beyond their big three, we got a good demo of some of their bench depth. Ariza had a couple of back to back daggers to help his team take the lead late in the game - certainly he takes home the Warrior Killer award for the night, and Powell provided yet another force down low on us.

Overall, it was tough. I really wanted to see the Warriors topple the Lakers and, with the way we were playing in the first two and a half quarters of this game, I seriously thought that we were going to do it. There were periods of time where the Warriors could do no wrong! Let's take a trip down bulletpoint lane!

And that's that. Don't get me wrong. This team is growing by leaps and bounds. It's just time for us to make the next step. The difference between elite teams and mediocre teams is the ability to make adjustments in game and plug the holes that are costing them to blow leads. We can play. We can score, We just haven't mastered controlling ourselves or managing a lead yet.

They say waiting is the hardest part...

Anthony Randolph baby! Sure he brought a few of his rookie mistakes to the table, but he played an excellent game, even netting a double double along the way. Also, I think he stayed on Odom's back for 8 seconds during that play in the 3rd.