Oh man, you've got to be kidding me. How can a game that started with so many positives have resulted in an overtime loss and the possiblility of Monta re-injuring himself?! Not that we should have ever have been in overtime, but man, what a blown five minutes! I can't even think of one positive thing that happened during OT!

Stupid overtime. Stupid Duncan boosting the Spurs out to an early lead. Doesn't he have 5 fouls? How the hell hasn't he fouled out yet?

Are you kidding me? Overtime?! Did Bowen seriously not foul Jax there? Can we get a red challenge flag? C'mon show the replay there's no way that Bowen didn't touch his wr--- oh crap. That's kind of impressive right there.

Seriously I can't believe this is about to go to OT. We outplay the Spurs for most of this game and play just enough ol fashioned point and shoot Warriors ball to let them right back into it.

I'll tell you one thing. It's going to suck to write the recap on this bad boy if we lose... 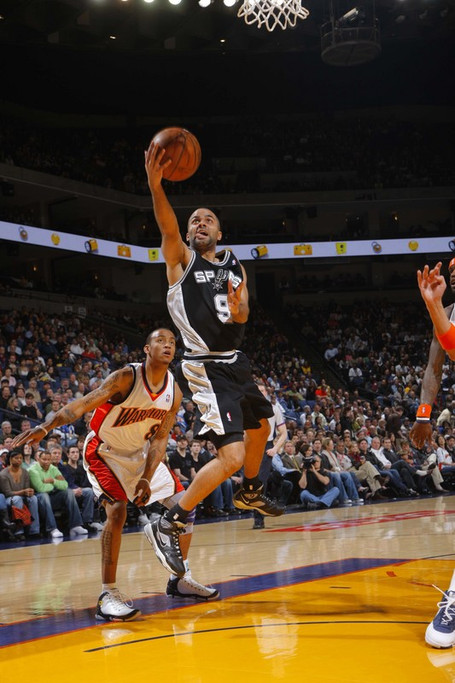 Shortly before the end of the 4th quarter

Damn. How the hell did Jackson make that shot?! As ill-advised as it was, it seemed appropriate considering everything else we have seen from him tonight. It's too bad some of his other shots in the fourth are part of what led the game to become this close. But he's hardly to blame; he's certainly done far more good than bad.

Are we trying to set the world record for longest period of time played without scoring in professional basketball? How long has it been exactly? Maybe someone takes it to the hole for a score? I mean, besides the Spurs. I think allowing them to tie us up this late in the game is enough. We need a few miracle shots.

5 and a half minutes earlier

Ceeeeeeee-Jaaaaaaaay! Everyone has been taking turns tonight and right now it's your baby! A sick behind the back on Hill and 6 quick point on the board? LOVE IT!

Damn Hill. You just got schooled by CJ Watson. You can pick your ankles up at Lost and Found after the game.

Wow. I didn't know the ball could rest up on the backboard like that. How are they ever going to get that down?  I would throw another basketball at it.  Or maybe try to hang on the rim and try to pull myself up and then maybe try to climb on top of the rim halfway so I can maybe kind of reach it if I--- no wait - that's just stupid. Who would even try that? Hey what's Maggette doing? Oh dear god.

Spaghetti Maggette! Back to back jumpers to open the fourth! It would take something pretty stupid in the next couple of minutes to make me forget about that!

End of the third quarter

Did anyone else even score in that quarter besides Manu and Jax? 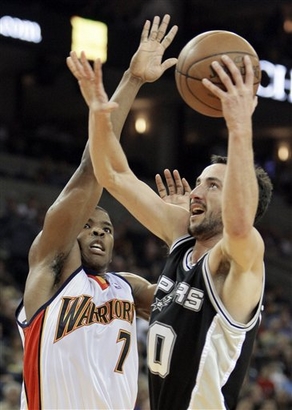 (...aaaaaaand you get the point)

End of the 2nd Quarter

Well you can't argue with what we just saw. Jackson had 13 points and 6 dimes, Maggette came in with 9, and we get to head into the locker room up 4 points against a Western Conference elite? I like where this is going. The Spurs look like they have no idea what hit them! Hopefully Jackson can keep up this shooting!

Oh man! Up 6 off a 13-2 run against the Spurs?! The Warriors are playing TIGHT right now! I was impressed enough when we were taking them point for point but to open up a lead like this?! I'll take it!

Where did this crazy post game come from with Jackson? He's taking fools to the hole like his name is Baron! Don't get me wrong; I dig! Just not an aspect of his game that we get to see that often.

End of the 1st Quarter

OOOOOOHHHHHHH!!!! Who else but Monta could hit a leaping last second three pointer to bring us within two at the close of the first?! Man that would be great if we turned that into a momentum swing for us in the next quarter. Man I love watching Monta. I'm so glad he's back. I hope he never gets injured again.

Okay at what point do we start double teaming Duncan? If we keep letting him post up Beans they're going to go right back to him again and he's going to grab an easy bucket... AGAIN!

Wow it's like the Parker and Duncan show here. I bet they combine for 55 points with 7 dimes from Parker, and 15 boards from Duncan. I'm just sayin'.

Start of the 1st quarter

Whooooo! Nice first cut by Monta! Looks like this is going to be a fun game to watch! I love Monta. I hope he never gets injured again....

Tough not to give it to Jackson on this one. 33 points, 11 dimes, 5 boards and 4 steals? He was getting it done on ALL ends of the floor tonight. Would I have liked to see better choices of shots down the stretch or less turnovers? Sure! But don't let that take away from what he did accomplish tonight.