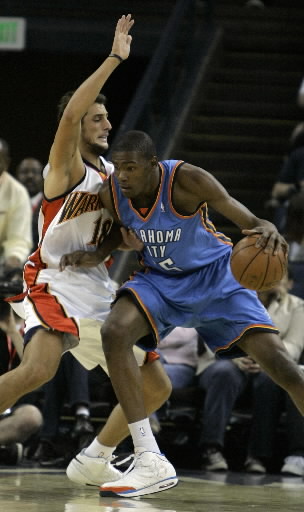 It's not often a "superstar" comes to play in our house and we say to ourselves, "this should be an easy win for us!" Well tonight is one of those nights. Am I optimistic? Yes! Is it because we're playing the best basketball of the year and our players are all back healthy? No! It's because we're about to play the Thunder. Probably the ONLY team in the league I don't worry about. I mean honestly, I'd worry about the Kings before I'd worry about the Thunder.

The problem is that I'm possibly setting myself up to have to eat my own words. And those words would be KEVIN DURANT. Superstar. I know some of you might disagree with the superstar crowning at this very moment but check out the most recent stat's he's putting up for the past 5 games:

The problem for Durant is that he's surrounded by guys I've never heard of. Guys who wouldn't even make the Warriors bench. Which is ok for us because we'll take any win at this point. Here's looking at Randolph having a huge game and allowing our young guys to get extra pt.

- Randolph makes 4 crazy dunks. 1 of which gets on ESPN.

- Ellis still has a slow night.

- Durant is guarded by Jackson but still puts up 30+.