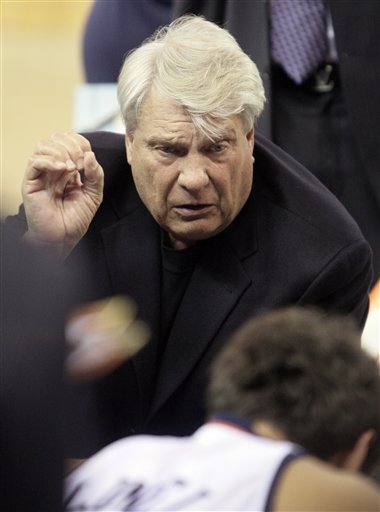 NEW FLASH: This just reported by the Associated Press of a memo distributed to the Oklahoma Thunder right before tip off last night against the Warriors:

I would like to take this opportunity to welcome you to Oakland and the Oracle this Saturday night. As you are probably aware, I am on my way to hopefully win my 1300th victory of my coaching career. I would like to wish you luck on tonight's game and I also wanted to give you the heads up that I have asked my team to play absolutely NO defense. That's right. They will not guard a single player all game. Please feel free to jack up any shot you prefer, for we will not contest it. In fact please feel free to also pass off the backboard and create a nasty dunk on my friend Belinelli (who we could not trade a couple days ago) sometime in the second quarter.

If this is my 1300th win of my career I want to make sure we all play "Nellie" ball so I hope you acknowledge this and help us play an entertaining game of defense free NBA JAM. Enjoy and see you at the taco truck next to I-80 after the game.

Luckily for us the Thunder got the memo before the game and if you had a chance to witness it last night, this is exactly what played out. It was basically an NBA all-star game without the stars. Sure we got to see Durant scorch the Warriors but so did some other no names so it really doesn't count. The Warriors won a 133 to 120 and showed us when you save all your energy by not playing defense, you can score quite a bit.

Let's see how they did it.

For all the criticism our coach takes not playing him or not subbing them, last night should have reminded us how lucky we truly are to have one of the greatest coaches of all time. With the win over the Thunder, Nellie has secured his 1300th victory of all time. I wish I was there to witness the game in person and seeing pictures of him under the jumbo-tron with his staff and teams is a sight to see.

What's even better is that this game was won by true Nellie fashion. No defense. I was watching this at a party last night and my favorite line of the night came from a 9 year old little girl who sat next to me and said (as she watched the tv.) " how come they keep going back and forth shooting but no one tries to stop the other person?". I couldn't help but laugh but realizing she is absolutely correct. What's worse is that I just watched the Rockets vs. Dallas game as well as the Lakers vs. Hornets game the other night on ESPN and it was depressing seeing the difference with this game and how far we truly are from being a competitive team.

But I digress. We can't take anything away from Nellie and for this I salute him with my Warrior Wonder for the night. He only needs 32 more wins to be the all time leader in coaching behind Lenny Wilkins. Can he do it this year? Probably not but I'm hoping he'll come back next year to lock it in with a Warrior uniform. Looking at the coaches in the game today, Nellie's the guy I want here and we are making progress with him. Thank you! 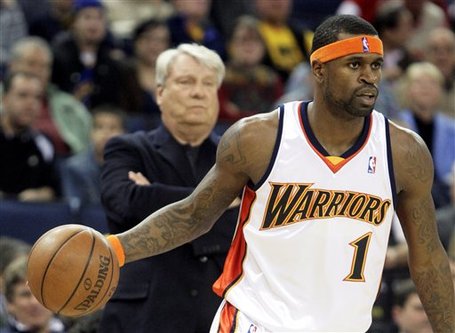 Behind all our players is the guy who made it possible.

Aw to the Fence:

Guess what? Here is the stat line of the top 3 Thunder players last night:

Want to hear something funny? With NO warrior scoring more than 26 points, the Thunder still lost. It was fun seeing these guys play. On one hand I can see why they are so bad in the NBA but on the second since they are so young they have a chance to be the next Warriors in a couple of years. And when I say the next Warriors I mean they can start winning some games but never making the playoffs so will probably end up staying in this perpetual cloud of never building to a winning team.

Granted they do have a superstar in the making and I'm being facetious so in reality the Thunder have a bright future way down the line. Last night they were given the green light to do whatever they want offensively. The Warriors played with NO defensive intensity so Durant and Green and their whole team where just dribbling down and the court jacking up shots. They shot 52% from the field and I think they would have won had their 3 point shots gone in. They only shot 14% for behind the arc. What a sad thought.

On a side note, Jeff Green and Russell Westbrook are better then what I give them credit for. Last night they put on the pretty nice show to the expense of Belinelli with a crazy off the backboard dunk in the second quarter. I'd like to see these 3 play next year and see how they progress. 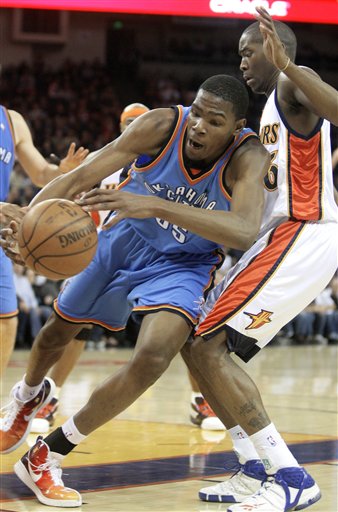 The Warriors shot 56% from the field taking 80 shots and attempting 19 from behind the arc shooting almost hitting 50%. Everything was going in. This was a lot of fun to watch. Here's a quick song you could have sung during the game:

Everyone had a good game tonight. Then again how could they not? Most of our players scored in the high teens and had some nice open shots. My only disappointment was in Anthony Randolph. I was expecting him to have a great night playing against little defense but the only highlight came from a botched open dunk effort. I'll refrain from discussing that one, but I wasn't happy.

Jackson played well with 26 points and 9 assists as well as Crawford 24 points and 4 assists. My favorite stat is still with Maggette who scored 25 points in practically 25 minutes of playing. Not much really to explain for the game other then my song I just made up. Want to hear it again?

It was a fun game to watch but one we'll forget rather quickly but here's to the start of a 4 game winning streak! You heard it here first folks! 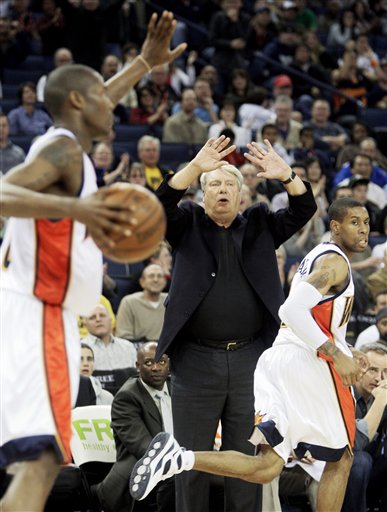 Nelson told his players that the Warriors' youngsters will be getting more playing time for the rest of the season. Jackson and Crawford both claimed they're cool with the club's new focus.

"Those young guys deserve to play," said Jackson, who played 38 minutes instead of his regular 40-plus. "I'm cool with coach cutting down my minutes some, because they've earned it. They deserve it."