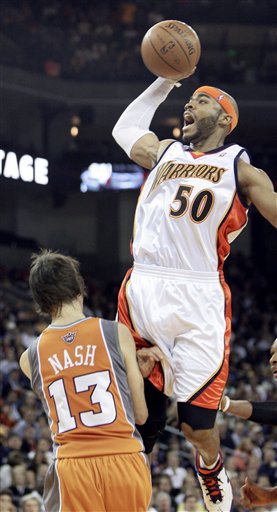 Tonight will be a much much more difficult game.

If you read R Dizzle's recap of the Wednesday game, he wrote a few letters to the Warriors and Suns players. Guess what? We got some responses. Hit the jump for those.

Also, one cool thing the Warriors are doing this year is having "viewing parties." Check out the details below:

"Surround yourself with Warriors fans and come watch the Warriors on the road at locations throughout the Bay Area! Meet the Warrior Girls, win prizes and purchase 16-ounce cold beers for $3. Admission to the Road Viewer Party is FREE!"

Thanks. I had a decent game. 19 points in the first quarter? Well if nobody is within 10 feet of you on a 3 pointer, you have to take it. I guess I just got lucky that the ball went in.

Anyways, to get your biceps as big as mine, here's the secret: Krispy Kreme donuts. Enjoy.

Your team of midgets will pay tonight! Me and Amare will crush you.

You keep watching, I keep lying.

I be better tonight.

Get me out of here! But please not to the Warriors.

Rob Kurz is my hero.

I miss the Bay. I miss the Warriors. I miss the fans. I don't miss Chris Mullin. Should have kept that team together for another year. Now we'll never know.

It's payback time tonight. I'm dunking on TenderRonny. The only person in a Warrior uniform to block my shot like that was Adonal Foyle in practice.