Share All sharing options for: Recap: Warriors 116, Nets 112 - A Festivity Of Fluctuations

Wow! What a game of swings. Watching the Warriors this season, it wasn't all that shocking to see New Jersey churn out a 39 point quarter against us to take an overwhelming lead at the end of the half. In fact, it wasn't even that shocking to see us claw our way back into the game, slowly erasing a deficit that we should have never been in to start with.

But to gain our lead back, grow it and maintain a decent level of ball while we allow our opponent to fall apart? THAT was a little surprising.

Usually we're on the receiving end of disappointment like that! 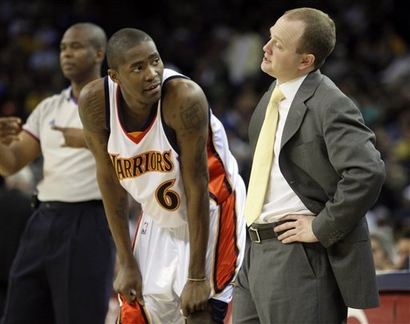 Let me be the first to admit - after our performance in the 2nd quarter, I had all but written this game off. Little did I know that our weakest links in this dismal time would turn into our greatest sources of strength in the second half.

Similarly, what was seemingly our pillars of strength in the first half of this game receded away to allow the rest of our team to stretch their wings. So what was the result?

Well short of Kabuki, everyone on the Warriors had their time to shine today. And shine they did.

Even in the 1st quarter, where we ended up outscoring New Jersey 30-28, we were subjected to a lot of Warrior stop and pop shooting. While I wouldn't say that every shot we took was a well thought out scoring attempt, we were fortunate to nail the majority of our buckets and clean up our mistakes. The combination of Andris and Randolph down low proved to be highly effective in wiping the glass. At the end of the 1st, Biedris had a whopping 8 boards with at least 4 more coming from A.R.

But what happens when our shots stop falling and our opponents continue their onslaught? Look no furthur than the second quarter. Not only did the Nets continue nailing their shots, they started draining the long bomb. Seriously though, I have to give it to the Nets' bench - those guys were snipers today. Dooling 2 for 2, Simmons 2 for 3, and Hayes 3 for 5? At any given possesion, one of them was living at the baseline waiting to drain one on us. You'd think we would have caught on to that strategy...

Despite the Nets nailing their distance shots, we actually did a pretty decent job of staying within reach during the second. Well, until the end of the quarter, that is. Want to know the recipe for disaster?

Now if you weren't entirely convinced of the confidence that we gave New Jersey with our performance at the end of the first half, look no further than Yi chucking up a three himself near the start of the third. Not saying he can't hit them, but when their PF starts lobbing them up from beyond, we really have evaluate our true threat factor on the court.

Turns out, we did. And we're not all that bad! After shooting 1-8 from beyond in the first half, Ellis turned on the spark once again with a few beautiful shakes to the rim. As the quarter continued, Jack started to wake from his dismal start with his open look three and absolute prayer of a lay in.

Unbelievably, we ended the 3rd on a hell of a run and managed to go into the fourth down by only two!

Through the first three quarters, Crawford was nothing more than a liability on the court. Poor shot selection, lack of passes and, yes, an airballed three left me yelling at my TV to get him on the bench. But the 4th?! Jamal got the party started with some nasty shakes, nothing but net threes, and damn fine looks.

I guess Morrow didn't want to be left out of the party because he certainly turned on the juice as well. Swishes, boards, and overall, a solid bid to Nellie for some more playing time in future games. He seriously has one of the quickest releases in the game. Love it when he's on point.

Couple of notes from the game: 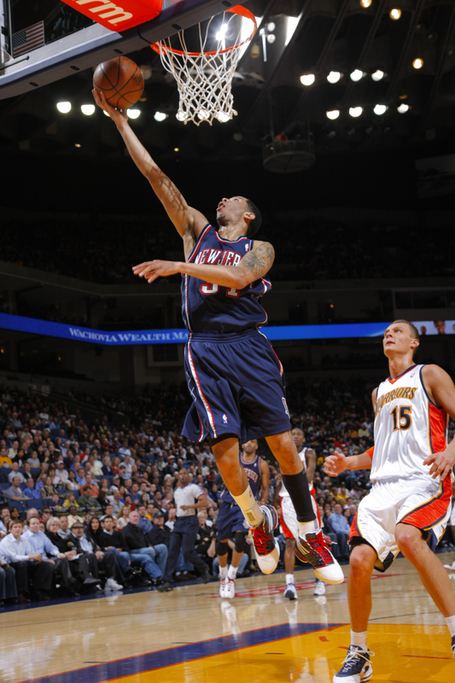 I really was going to give this to Jamal Crawford for his outstanding make up performance at the end of the game. But in the realm of make-up performances, Jackson really took the crown tonight for late game productivity. Take it away Captain Jack!