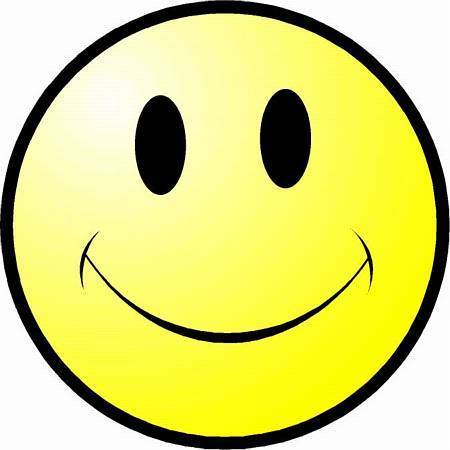 Who the heck said we lose every time I predict a win? You crazy! I knew we'd win and I knew we'd have a great night doing it. Man was that fun or what? Best quote of the night "ball movement baby!". I can't help but replay the fantastic play in the 3rd quarter when Turiaf grabbed a pass and swung it to Wright for the open dunk. That right there showed me the Warriors of the future. That right there showed me why we should all smile.

The Warriors did exactly what I thought they would do. They won by 7 points plus one. With the roar of the crowd the Warriors beat up the 76ers to win their last 4 out of 6 games in what I believe is the turning point of the season. True ball movement. Check it out!

There's no arguing that this season has been a bipolar emotional rollercoaster for us Warrior fans, but I've got to say, recently they've looked stellar. I'm not sure what changed but I like it. Somehow maybe with all my complaining, they've learned that it's better to play as a team then isolation offense. Do I sound like a broken record? I think so.

But tonight was a great demonstration of team play. It looked as though they took a chapter out of the Kings playbook when Webber was there, making 3 or 4 passes before someone made a shot. It was fun to watch. The Warriors did it with everyone involved. Jackson or Monta would bring the ball up, pass it inside to the forwards or center and then someone would cut in, get the ball back and put in the easy dunk. It was great. You can see it in their eyes. When one player had the ball they always looked to see who else was open before they made a play. Damn Warriors always know how to make me excited about the team during season tickets renewal! 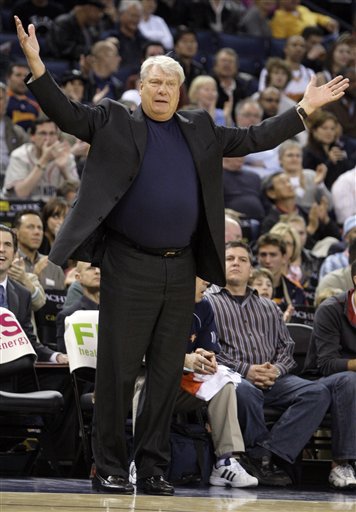 Nellie was it you who asked them to pass the ball around?

So basically I've officially started the "I LOVE BW" fan club. Man I was stupid at the beginning of this year. I completely wrote BW off after the first 2 months. I thought he was good when he first started to get playing time, but when he went out on injury he vanished from my memory. Tonight he showed why our front line is the future of the franchise. How Nellie will incorporate BW and AR at the same time I have no idea, but for now this is fun to watch. Scoring 25 points and grabbing 6 rebounds and a block, Wright helped the Warriors secure the lead by the second quarter and they never looked back. At one point they were up by 20 points and the smooth shot selection and impressive dunks made it one of the best offensive nights we've seen from this guy. The best part is that he shot 10 for 13 and committed only 1 turnover. Since coming back from injury it's only convenient that AR has been sidelined to give Wright a shot at more playing time. Nellie has slowly but surely given him the chance and he's taken full advantage. With 4 minutes left in the game Nellie took Wright out and you can see it in him that he was disappointed and able to play for another half hour. I'm excited to see this guy improve and my favorite aspect of BW is his demeanor. Could be a great fan favorite quicker than you think! 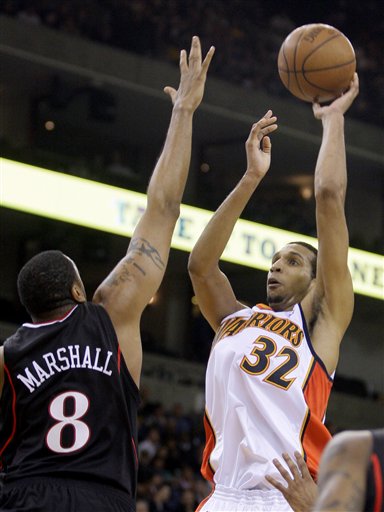 This shot is sweet!

But let's not forget why we won tonight. We won because of what? Yes, that's right. Ball movement. Fantasy Junkie was impressed with Maggette's assists last night and he didn't slow down tonight. Even though he only collected 1 assist on the stat sheet, I swear if the NBA collected "half assists" then he'd have 6 of them. So many times did I see Maggette look for the open man or create a play and then pass it up only to have that player pass it up again for the open shot. I was surprised. I guess I'm used to seeing Maggette just put his head down and drive to the basket. But this time Maggette made it a point to look for the open man. This spreads out offense and when he can't find anyone he can take matters into his own hand. When he plays like this you can see our shot selection goes up as does our field goal percentage. It would be interesting to see if Nellie had something to do with it or if Maggette just decided it leads to better results. He had a productive game with 12 points even though I thought he was robbed a couple times from the refs, but let's see if he can keep it up. 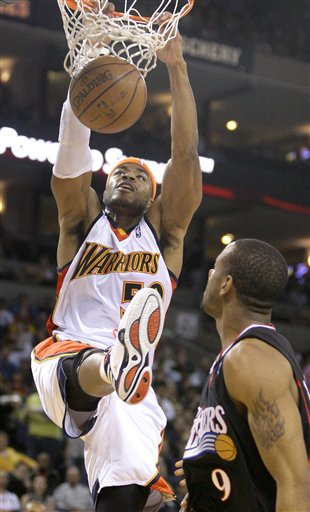 On a side note, I'm not sure if you were at the game or not but halfway in the 3rd the lights turned out in the arena and we got to play in low lighting for a couple of minutes. That reminded me of how the Lakers lower the lights on the crowd to enhance the scene of the game and I don't understand why no one else does it? Ok enough with the questions.

Jackson and Ellis combined for 35 points as Jackson himself contributed to most of the assists with 9 tonight. He was only one shy of a triple double as he scored 14 points and grabbed 10 rebounds. Monta had a sick layup between two defenders in the fourth and went on to score 21 points with 4 assists. The weirdest stat of the night was Monta's -2 plus minus. Can someone please explain that one to me? Wasn't he part of the 20 point push? I digress, it was fun to see them both have decent games together and help the young ones get involved.

Turiaf ended the night with 4 blocks. I also have to give this guy credit. He really has a knack of seeing the whole court and made some of the best passes of the night. How is it that he has more assists then our point guard? Fine by me.

Another side note, do we really need Crawford on our team? Does he really bring that much game to our club? Just checking to see the reaction.

All in all it was a great Friday night for me and many others. Maybe it just takes positive thinking and a smile. We have a TOUGH 4 game road trip coming up on Sunday. We play the Hornets, Spurs, Mavs and then Nuggets. Let's hope our new sense of ball movement will help us win a couple of them. Let's go Warriors!

My main man Brandan Wright. You deserved it big guy. Keep up the good work. There's room for 2 future stars on this team if you ask me.