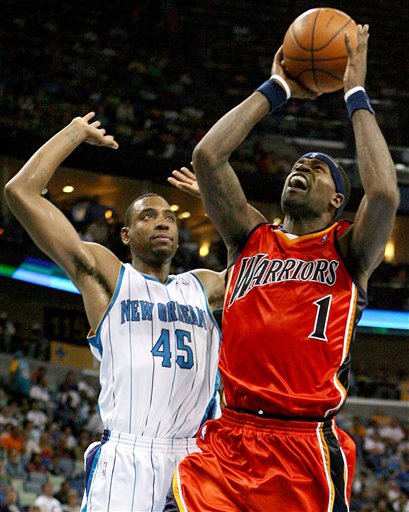 Anyone have a clever caption?

Warning: Do not let the final score fool you. This wasn't ever really that close.

The last time the Warriors were still in the game was with 2:18 left in the first quarter and the score tied 20-20. By the end of the quarter, the Hornets shut down the Warriors while pulling to a 27-20 lead. No big deal right? Wrong. The Warriors scored just 2 points until CJ Watson hit a couple free throws with 6:52 left in the 2nd quarter. This high powered Warriors offense scored 2 points in 7 minutes and 26 seconds. Hello? Monta? Maggette? Jax?

Meanwhile the Hornets didn't stop scoring. At that 6:52 mark of the 2nd quarter, the Hornets were leading 38-22. All in all, that's an 18-2 run. Good night Warriors. At the half, the deficit was 17. By the time the 4th started, the Hornets were up 20. It wasn't until the 1:32 left in the 4th that the Warriors cut the lead to single digits.

The Hornets were not going to let a repeat of the January 30 game occur when the Warriors took down the Hornets in New Orleans. They're on fire right now (12-3, last 15) and you can bet with Chris Paul leading, they're not going to lose a game they should easily win. They're motivated to win, 1.5 games out of first in their division and home court advantage in the playoffs. 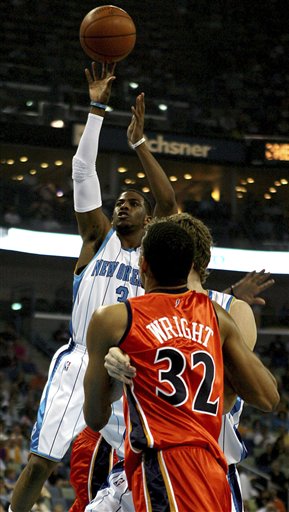 Good Night Defense
It was all about the defense tonight. No, the Warriors weren't playing defense, it was the Hornets. The Warriors shot below 40% from the field and had 17 turnovers. Not going to win too many games like that. You have to be playing the Wizards, Kings, or Clippers to be able to win when you play like that. To their credit, the Warriors did get to the line so you know they stayed aggressive going to the hole and didn't settle for jumper after jumper. It certainly helps not to have Peja out there because every time he's out there the Warriors just go right at him until the Hornets make a change. Unfortunately, Peja didn't play tonight so we got a bigger dose of Julian Wright and James Posey who are just a little harder to score on.

When the Hornets get after you and the Warriors can't shoot, well good night. 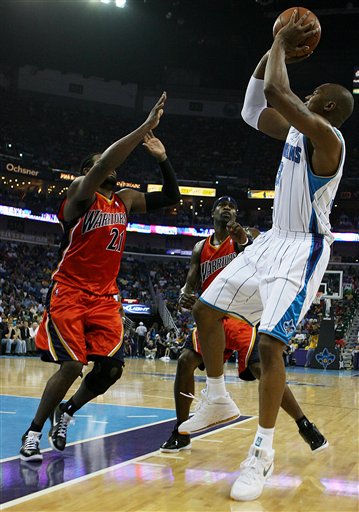 Rebounding
It seems the Warriors are starting to actually rebound. They tied the Hornets in rebounds with 47. Stephen Jackson did a great job tonight on the glass with his 10 rebounds. That's 2 straight games with 10 rebounds. Also chipping in were Corey Maggette with 8 boards and Anthony Morrow with 7, both of those guys came off the bench. It's great to see your small forwards and shooting guards come in and help out with the rebounding but it is a little disturbing that all 3 of those guys outrebounded our center, Ronny Turiaf, and power forward, Brandan Wright. Perhaps with Andris out, the guards and small forward know they need to crash the boards harder. Hopefully they continue to crash when AB comes back. 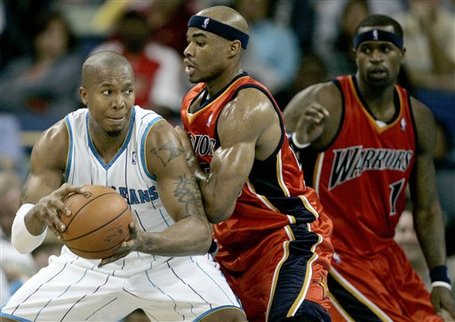 After all the losses, after all the turmoil surrounding the team, they're still playing hard and I have to give them props for that. I respect that. I appreciate that. Those are true professionals. You can guarantee you'll get an entertaining game if you head on out to the Oracle because these guys are giving it their all.

Stephen Jackson for workin' it, goin hard every game, and taking punishment like this. 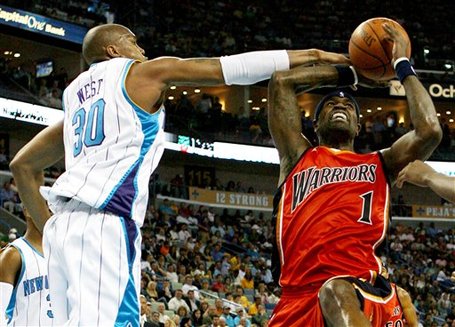