Oh my word! I did NOT expect that to go down at the AT&T Center tonight. And from the looks of it, neither did any person in the building. The Spurs almost got run out of their own house by a team of scrappers.

Man that was almost like a Disney movie, wasn't it? The young group of hooligans come together under the old but wise coach to face off against the older veterans on their home floor in a contest where they can expect a serious beatdown. (Cue the inspirational music...) Somehow the young boys learn how to play the game, surprising the vets with their ability to stay right with them, bucket for bucket.

And in the end, when anything goes with a mere 1 point lead, this young team that hasn't won a battle against these vets in 12 years, looks at each other, and without any words spoken, realizes what needs to be done.

They step back onto the floor. They poise themselves for glory. (Cue the slow motion) Sweat drips from their brows and the fire of determination burns in their eyes. In the distance, a knuckle cracks.The time of glory is upo- HEY! WHO THE HELL IS COVERING MASON?!!! 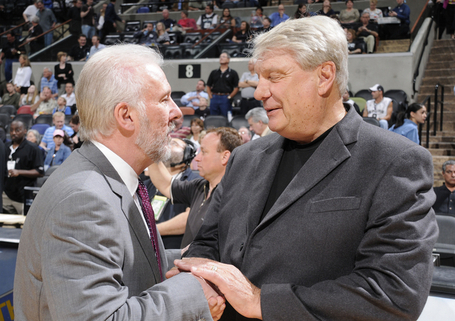 Pop: "Gave us a scare there Donnie! For a minute there I thought you forgot you were trying to tank!"

Nellie: "Don't be silly. We just thought your boy who went 10-16 during the game would miss a wide open 15 footer!"

Am I disappointed? As with any heartbreaker, sure I'm a little disappointed to see that we didn't topple an elite in their own house after 21 straight losses. But I've certainly felt more let down from the Dubs that I do right now. After all, this was practically a scheduled beatdown, right? It's tough to fault the Warriors for much after running a team like the Spurs that close for 48 minutes.

I'll tell you, the start of the first quarter played out the way I anticipated the entire game to go. While the Warriors were putting up a decent effort, the Spurs did an excellent job widening the gap, due in no small part to their 8-11 shooting start. It was the classic case of the Warriors do good - their opponent does better.

But, as with any team, the Spurs couldn't keep up that kind of pace. All the Warriors needed to do was prevent San Antonio from tearing off on a crazy run that would result in a gap too wide to close. By halfway through the first, the Warriors had accomplished this goal. San Antonio began to cool off a bit and the Warriors were right in their rear view mirror.

By the second, it became very apparent that Monta was on his way to an extremely good game. His midrange was falling consistently and he was showing no signs of slowing down.

I have to give it to the Spurs - these guys are one hard team to close a gap or widen a lead on! I really thought the Warriors played pretty well in the 2nd, but everytime we started on a run, there was Mason or Finley with a well timed three to slow our roll. I wasn't surprised at all when we were informed that San Antonio is the 2nd best 3 point shooting team in the league.

Randolph gushing time. Holy crap what a great game by A.R. Little sad that my double double prediction didn't pan out (by one board) but that kid was everywhere tonight. By the time he sat down at the end of the first half, he had three swats - two of them being great ones on Parker, 7 boards, 2 dimes and 6 points. Not bad at all! 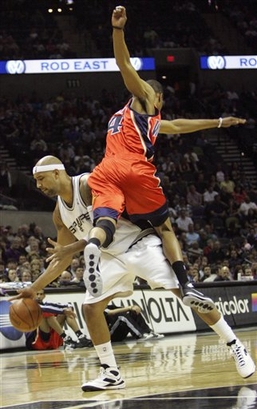 Behind the buckets of Ellis and the heart of A.R. - the Warriors managed to close out the half up 2. Did not see that coming. Did not think it would last. Unfortunately I was right.

With a 2 point deficit to one of the worst teams in the league, it came as no surprise that Pop threw Duncan back on the floor to slow us down. As expected, Duncan made a difference on both ends of the floor with endless banked lay-ins that made me want to curl up into a ball and fall asleep - much like the rest of Tim Duncan's game. (Don't get me wrong, I'll take effective over flashy anyday but wow man... smile or something.)

As the third wound to a close, despite Duncan's presence, AR continued his defensive reign of terror, Morrow and Jax joined the scoring mix, and we went back to our bench down by 1. Seriously, could we do this?!

Enter the 4th. Bucket for bucket. The Warriors' young 'uns hanging with San Antonio IN San Antonio. I almost thought that the wheels were coming off when the Spurs nailed us with that 16-8 run resulting in a 6 point lead.

And then there was Morrow from the baseline.Make it a three point lead. Seriously, could we do this?!!

A one point lead with 54 seconds left? Can we actually do this?! Knocked away?!!! Kabuki races it down and lays it in?!!!! ONE POINT LEAD?! CAN WE ACTUALLY DO THIS?!!!

Screw it I'm going to say it. Seriously, the guy you choose to leave open is Mason?! What about his entire game tonight led anyone to believe that he would miss that shot? This guy was plastering down jumpers with one eye closed!! All that work! All that work for nothing! WHY WHY WHY WHY WHY?!!

Okay. Rant over. Overall the Dubs did far better than expected. Despite a loss, there was some great potential there. And right now, that's more important than a win.

Despite A.R.'s great performance out there tonight, I just can't not give this to Monta. his consistent shooting is really what kept us in this game tonight. As much as we were frustrated with Mason, the Spurs fans had to be frustrated with Monta. 27 points, 5 boards, 3 dimes and no turnovers means one very good game.