Whooooooa! First and foremost, let's all throw up MAJOR props to GSoM faithful ROMESdavidWOOD37 for taking the initiative to put up the Open Thread today. Honestly, I'd like to say that the reason I whiffed on the thread had something to do with a supervillian, an incredibly cool car with lots of explosive themed gadgets, and of course, droves of beautiful women encountered at every twist and turn in my plot to save the world...

...but in actuality, it had a little more to do with the fact that I thought I was scheduled to write on tomorrow's game against Chicago. 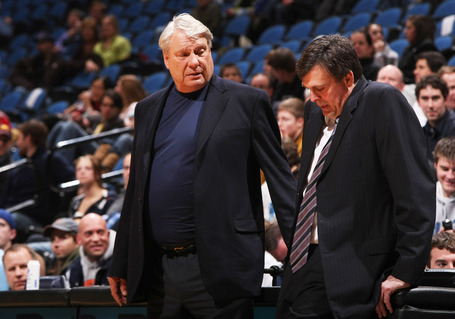 "Listen, Kevin, not sure if you heard... Kinda trying to tank here... You're not making it easy."

Well I think it's safe to say that despite our many woes, there are definitely NBA fans out there that have it tougher than we do! (Not a hell of a lot tougher, mind you.) Tonight we saw some of those poor souls in Minnesota. Now, there's really three ways that you can look at a night like this

1) We're pulling our road game together.

2) The Timberwolves are REALLY hurting without Al Jefferson.

Well, we know number 2 to be true. Let's be optimistic and choose option 3 shall we?

Honestly, short of Mags' inability to hold onto the ball tonight, you can't fault any of our players for having sub par games. What we encountered tonight was truly the perfect storm of our players hitting near maximum efficiency while our opponents hit near rock bottom.

Now I don't want to get carried away here. While we can cast many a stone in the direction of Minnesota for their performance tonight, it would unwise of us to do so without first acknowledging that we take residence in a prime glass house real estate market ourselves. But that being said, it's pretty rare that we get to be on the statistical upside of a victory. So let's take a look as some of the factors that led to tonight's mollywhoppin'!

Decent Shooting - As a whole, our shot selection was on point tonight. The Dubs shot 45.7% from the field tonight, with that total being diluted by Jackson (shocker), Crawford (shocker), Watson, and Kurz (sshhhhhocker!). Stack that up against the Wolves' 35.9% and we're looking okay as long as we...

Didn't Get Killed on the Glass - Sure, we didn't outboard the Wolves - but we certainly held our own in tempering their 2nd chance buckets. With Turiaf on the bench (arguably our biggest inside bruiser)  it was good to see Davidson, A.R. Mags, and Jax pick up the slack to help out Andris. Because grabbing those boards leads to better transition plays, especially if we...

Move the Ball! - With a beautiful 6 dimes from Jax, 5 from Jamal, 3 from Watson it was clear that our point guards were finally able to focus on creating plays that involved their teammates. I hear that's pretty important for point guards. Well, that and...

Controlling the Ball - Mags aside, no one on the team had more than 1 turnover. That's pretty impressive - especially for a team that ranks number 7 in turnovers per game with the all time turnover per game leader for the 2008-2009 NBA season on the squad. You guessed it. Stephen Jackson. Well at least his average came down a bit tonight, right?! 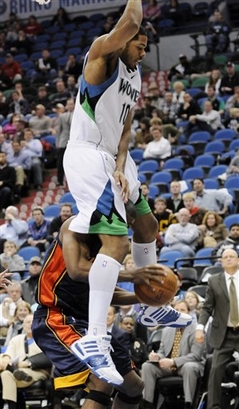 I'm fully aware that this picture has nothing to do with the content of this article. But seriously. Look at it. How can I NOT put this up?!

Well, overall, it was a great showing. The Warriors put a stop to their three game slide and, rare as it may be, did what they were supposed to do considering the caliber of team that they were up against. While our record doesn't set us too far ahead of the Wolves, personally, it would have been pretty depressing to see the Warriors drop this one - despite the fact that we are on the road. Seriously, that would be like losing to the Clippers or something.

Oooooh yea. This one is Jax all the way. After riding the pine last game to make room for the youngsters, Jax came back with a vengeance with 23 point, 7 boards, 6 dimes and, perhaps the most important stat of his line, ZERO turnovers. Can't argue with progress!

(And a cap tip again to ROMESdavidWOODS37 for stepping it up on the Open Thread!)