After a downtrodden season of economic changes that have impacted the country in virtually every facet, finally the boys are coming together to focus on the "human dimension" of the crisis and ensure that help is provided for people around the world who have lost their jobs, homes and savings.

Subacchi then proceeded to stuff one down right in the face of Dan Price, Senior Partner for Global Issues. (Posterized, fool!)

All this of course leads up to today's events; that's right, none other than bilateral talks between US President Barack Obama and British Prime Minister Gordon Brown. Do I smell economic tension? I THINK I DO!! 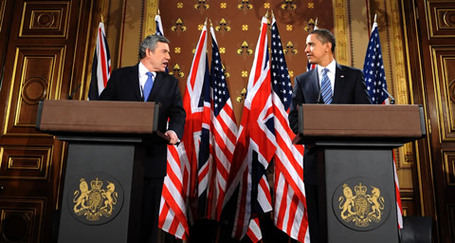 My oh my, what are we going to see?! An urging to strengthen the global financial architecture? A split between Anglo-Saxon economies such as the US and UK, and continental European states such as France and Germany, over whether extra economic stimulus measures or tighter financial regulations should be the priority?!

As Leaders and finance ministers taking part in the Summit converge at Buckingham Palace for reception and dinner tonight, you can be sure of one thing...

It's going to be a HOT TIME IN LONDON TONIGHT!!