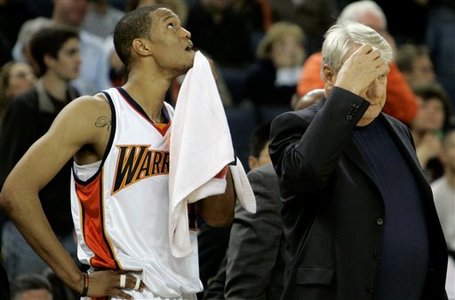 Valiant effort but imagine if Yao was there!

Ok well that sucked! Not only did it take hours to get to the damn stadium and find parking 2 miles away (thanks to whoever scheduled a Warriors game right next to an A's game which happened to be opening day!), but when the player introductions came on I learned that Yao WASN'T EVEN GOING TO PLAY! Maybe everyone else got the notice but me since I didn't see the sea of Yao jerseys we typically find when playing the Rockets.

In fact none of my favorite players showed up! Here' a list of those who didn't bother to grace us Friday night:

The fact that we lost by only 3 points is not bad. We played our second line and to lose by only 3 point is not bad. Had Yao played I don't want to think what the score would have been but let's just be happy we can watch the Warriors tonight and move on.

Here's a light recap before the preview for tonight's game.

Quick Notes on the game:

There's really not much to write here. For those of you who don't have CSN + but was lucky enough to avoid the traffic, it was an entertaining game that came down to the fourth quarter but we couldn't pull it out. I say valiant effort but in the end we didn't have the pieces to close it out. The best part of the night was watching Azubuike finally have a breakout game and to also see the 42 year old Mutombo still have it against our depleted bench.

We played 7 players. Just 7. That's crazy. And our 7th player Rob Kurz only logged in 9 minutes. So basically AR, Buike, Morrow and Watson all got to play the whole game which was nice. I would have liked Brandan Wright to be able to play in a game like this to log in long minutes but he was injured. Instead we only had our second lineup to play against a pretty good playoff bound team without their star player. But the Rockets did have Ron Artest we had to contend with and a full bench to help them.

Side Note: How does Crawford score 31 points a couple nights before but somehow injuries himself for Friday's game? We could have used him for the win. I guess Nelly is taking Fantasy Junkie's advice and trying to get a better lottery pick. 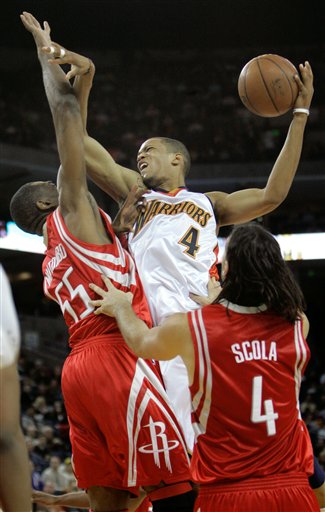 The game was close but we couldn't stop 2 of them. It wasn't Artest that gave us the problems last night it was Mutombo and Luis Scola.

Scola had a career high 28 points and 9 rebounds as he kept punishing us down low in the paint grabbing every loose ball and getting fouled on the way up. Shooting 8 for 10 in free throws, Scola was able to maximize the opportunity off of Warrior mistakes and prevent us from playing fast ball.

Mutombo was a great story. Whether you like him or hate him he was there playing like he was 10 years younger. With the finger waving he irritated us with 4 blocks, 15 rebounds and 10 points. The Rockets didn't need Yao for this game and it was mostly because of Mutombo. Filling in the spots and pushing Turiaf and AR around, he did a great job in throwing off our rhythm down low and controlled Biens to only 5 points (but allowed Turiaf to have 18 points). 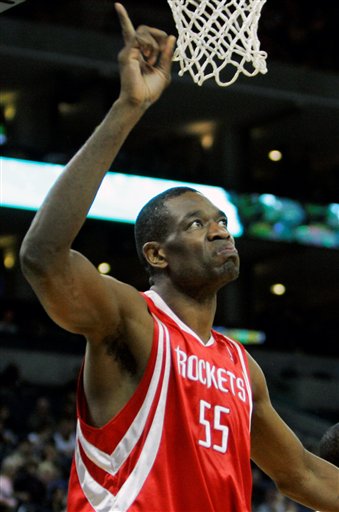 With only 7 players suited up we really didn't have much of a chance even though it was close in the end. We didn't have any of our starters and no one to come off the bench to give us a scoring punch. This was a game for our young players to gain experience and have time on the court.

AR played well with 17 points but still can't take over a game. He's got get energy and athleticism but only makes nice plays here and there. I'm waiting for him to learn how to be a complete force and dictate games. I have a feeling that will be another year in the making.

Morrow and Watson did a nice job getting us back from a 14 point deficit in the 3rd quarter and making it somewhat respectable. Watson had 18 points with 9 assists and was able to control the offense pretty well. But like Morrow he didn't have a high percentage shot. Morrow added 16 points but continued his poor shooting streak. Too late to ask him to get out of his funk. Season is over anyways.

Last night the hero of the match is our Warrior Wonder:

Azubuike had a breakout game and I loved watching it. Shooting 50% from the field and nailing 11 of his 12 free throws, he was the main reason we made it even close. With all our scoring punches out with pacifiers in their mouths, Buike took over the game and scored 32 points. The best part of this was the fact that he was guarded by Artest and Battier, two of the best defensive players in the league. We needed a strong showing by Buike to remind us how important he is to our team and how great he is when we are at full strength. Maybe this was the type of minutes Buike needed to make a case for next year. 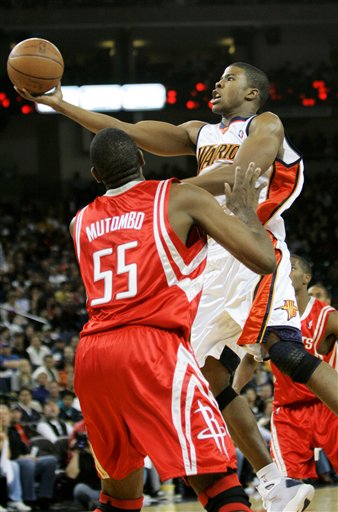