Oh man. That was just FUGLY. Let me just start by saying that I have the utmost respect for those of you who fought through regular Warriors traffic as well as A's/Red Sox traffic only to witness that abomination of a game.

It was a real pity to see the Dubs put up a display like that in their final homestand of the 2008-2009 season, but in the end, the game was oddly symbolic of the entire season. Overall a dismal display, blown chances to take control, and in the end we're left at the bottom of the league with nothing but a glimmer of hope to grab hold of.

Tonight, that glimmer was none other than Anthony Randolph. Yup. The future is bright. 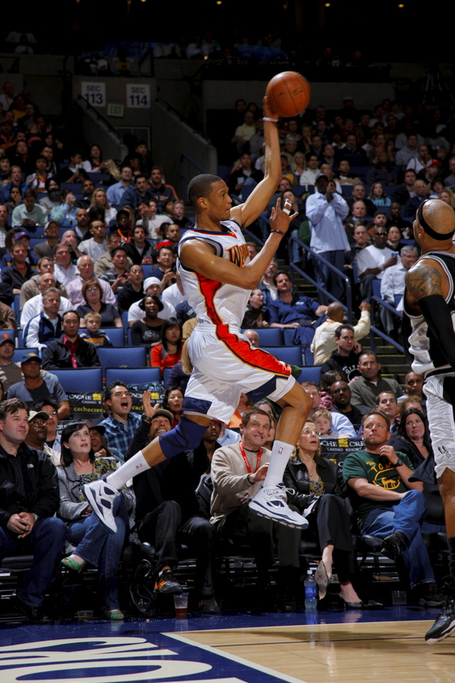 I'd love to gush about the other positives of tonight, but short of CJ Watson, there isn't really much to say. This was just a really really bad game. Every team catches then from time to time (granted we may come across a few more than your average squad) and they just plain suck.

Making it our closing game at home just added insult to injury.

The start of the game was promising. Although our open looks weren't going down, the Warriors were showing some pretty good hustle on both ends of the floor. Offensively they were moving the ball and creating decent plays. The only problem was, they were simply missing their open looks.

On the other end of the floor, they did a fair job of keeping the Spurs at bay while they attempted to figure out why they couldn't score. Unfortunately, the Spurs cured their offensive woes before we did. And they never looked back.

For the next two quarters of basketball, we watched the San Antonio Spurs take on C.J. Watson, Anthony Randolph, and some other guys wearing the same color uniform. Surpisingly, C.J. Watson and Anthony Randolph in their best form are NOT better than the Spurs in good form. Seriously who saw that coming?!

There really isn't a ton to say about a game like this. I jotted down a few points worth noting, but any attempt at solid in-game analysis on a 34% shooting night resulting in a 29 point loss is fruitless. We were the exact opposite of ourselves against Utah in a game that ended up getting us another ping pong ball. So it wasn't a total loss, eh?

End of the day, none of the missed calls made a difference. We didn't lose to the Spurs tonight, we lost to ourselves. The Warriors just didn't have the fire in them and the Spurs feasted on their docile enemy. But I will tell you one thing.

They're definitely wondering who that Randolph kid is.

Can it be anyone else? 24 points, 16 boards, 4 steals, 4 dimes, a blocked shot and a partridge in a pear tree. Ladies and gentleman, Anthony Randolph!

Let's just hope he stays away from mopeds this offseason...