Thank You GSoM for a Fantastic Four

Share All sharing options for: Thank You GSoM for a Fantastic Four

R Dizzle is assembling a FANtastic final recap for all you golden folk which will drop shortly, but I just wanted to toss in a few thoughts as the 2008-2009 Golden State Warriors season comes to a close.

First and most important on behalf of the entire GSoM Crew, a special thank you to all of the loyal readers, commenters, and friends/ fam throughout the blogosphere and media at large for your continued support of this project. Many of you have been with us for years, well before the short-lived, but unforgettable We Believe era. It's honestly not the least bit easy for all of us to keep this ship sailing on course with the constant suck of Clippers North, but with you all on board the ride's always golden. Much appreciated.

Believe it or not, but Golden State of Mind (previously Golden State Warriors BLOG) will be turning 4 in about a month and a half. Can you believe it? For those of you who have been with us since 2005... are you out of your mind? Just kidding. It's cool to know that we've spent about a presidential term "maxin' and relaxin'/ shooting some b-ball" on the 'net for this long with you. It's like a pick-up game and we're all rolling deep together on the team that keeps stinking up the joint, but is still smiling. I couldn't have selected a better group of teammates to go to battle with and keep losing with (except for that one big exception of course).

This is a very different ending than the previous 3 seasons we've covered here at GSoM. Just for a little Reflection Eternal (The Blast) check out the last 3 finales: 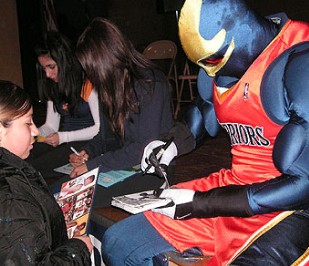 Peace be Thunder, mini-Thunder, and inflatable Thunder.
It was a difficult season without ya'll.  I sleep well at night knowing that you're probably up there hand delivering pizza and tossing t-shirts to 2Pac and Biggie.
Next up here on GSoM we've got our coverage 2009 NBA Playoffs, with the 2k8-2k9 GSW Report Cards to follow, and our ridiculously insane, but legendary coverage of the 2009 NBA Draft (with hopefully some live blogging). The offseason always brings out the best from this golden nation.
1 Dub. 1 Luv.