Polling GSoM: Which rookie forward will have the better sophomore campaign?

Share All sharing options for: Polling GSoM: Which rookie forward will have the better sophomore campaign?

Two rookie forwards from this class caught my eye in particular, especially their performance over the last 2 months of the season. Both are under 23 years old, so they should have plenty of Ridiculous Upside as we say in this business- but you never know. Simply being young does not mean you are guaranteed to make big leaps in your game. Case in point Warriors center Andris Biedrins who had a breakout season at the age of 20 a years ago despite his obvious limitations. Many excitingly claimed "Just wait until he adds a jump shot and post game!" Two full seasons later he has shown no signs of adding that to his very limited offensive repertoire. It takes hard work, dedication, the right attitude and unworldly talent to improve your game in the NBA. Nothing is a given.

Let's closely examine the numbers these two rooks put up this past March and April (their respective highs over the 2 months bolded).

I expect both to blow up the spot next season and I'd be very happy to have either player. After you rock the vote make the jump to see who they are...

Rookie Forward A is none other than the Golden State Warriors up and comer Anthony Randolph [Y! Split Statistics] 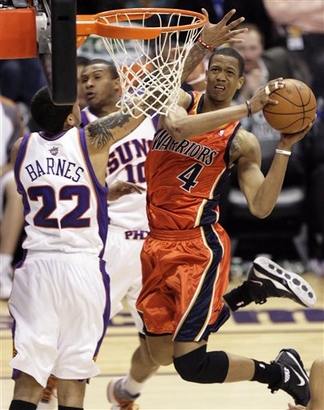 This jam is so sick it makes your face look sick!

Rookie Forward B is none other than Sactown's finest Jason Thompson [Y! Split Statistics] 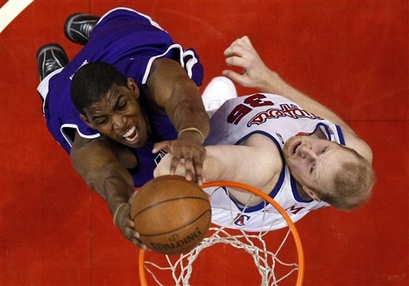 Monster jam on the monster!

I'm looking forward to seeing both of these young forwards vying for the big man crown in Northern California for years to come.

Both made The Risers list for Adam Madison's breakout candidates for '09-10 on ESPN.com:

Jason Thompson, PF, Kings: Thompson struggled with foul problems all season until the Kings threw caution to the wind and let him play through them. He averaged a whopping 4.1 fouls in 31 minutes per game after the All-Star break, but solid production (12.4 points. 8.6 rebounds and 1.1 blocks) showed he could be a decent starting option, and his foul rate gradually improved. It's not surprising for a rookie to come into the league and struggle to stay on the court, but he should only improve in that aspect from here forward. His ferocious offensive rebounding (2.9 per game) makes him a coach's favorite, and his double-double potential (four in nine April games) and relative youth (he will be 23 next season) make it easy to envision him figuring out more of the finer points of the game and averaging 31-33 minutes next season. The Kings have so much dead salary tied up in the power forward position that it's difficult to see them investing in another one this summer.

Anthony Randolph, PF, Warriors: Randolph's explosive finish should go a long way in determing the starting power forward next season; he averaged a double-double in April, with 15.1 points and 10.6 rebounds on 47.2 percent shooting. He still picked up 3.8 fouls in 32 minutes, but as a 19-year-old rookie, he was much more polished than the brass could have reasonably hoped for. As the team's lottery pick in 2008, it goes without saying he's a big part of the team's future, and not even coach Don Nelson's whimsical lineup decisions should prevent a sophomore season breakout.