That was a barnburner! Honestly, with the horrid defense we played, we really didn't deserve to beat the Kings last night, but hey, sometime your offense goes into overdrive, right? And when the shootin' is good, the Oracle is alive and fans get treated to some pretty amazing stuff!

Since we've had so little good to cling onto recently, I think it's only fair to mention our awful defense one last time before I go on to bring up some of the positive aspects of the game. Despite the fact that this battle could have really gone either way, there were certainly a lot of contributing factors that allowed us to be sitting in the only available chair when the music stopped playing.

So without further ado...

Ahhhhh. Now let's break this scorefest down, shall we? 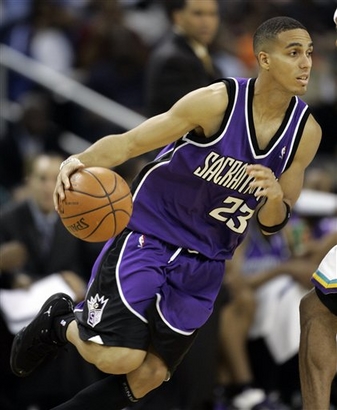 Yea okay, before we begin on the Dubs, let me just take a second and gush over Kevin Martin for a second. This guy is seriously a starter on 1st team All Underrated. He's ridiculous, and last night he showed us 50 reasons why. If the Kings ever get this guy the supporting staff he needs (or if he gets traded to a team with a better cast), he can do some really big things.

But speaking of big things.... JUMP!

Well hello there Anthony Randolph! Every game you look better and better and last night was no exception! Right from the opening bucket (incidentally, I was impressed with that shooting range) to the time you picked up his 5th foul in the third, Randolph was pillaging on all ends of the court. It's a damn shame that he ran into 5 fouls so early, because with his 17 points and 10 boards in less than 20 minutes of play, chances are if he was able to continue we would have never seen overtime. The Kings simply didn't have an answer for him.

Well, except for Kevin Martin...

Oh and as for Randolph's dunk from damn near the free throw line in the 2nd? Keep an eye on your mailbox kid. There's a cape on the way c/o Dwight Howard. You earned it. 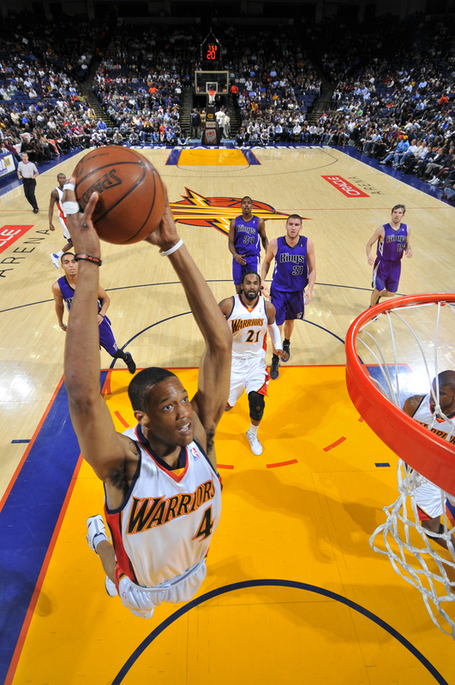 Speaking of solid performances, it was great to see Buike coming out with such an aggressive showing. Sometimes Kelenna steps on the court with a serious fire burning beneath him, and last night was one of those instances. Starting off with his two three point plays, Kabuki bulldozed his way into the paint and earned himself 27 with 13 boards, a nice little double double to call his own as well.

Not to be outdone, Ronny came out to play as well with 13 boards, 12 points and 2 blocked shots - including one that they are still trying to pry out of a hole in the floor of the Oracle Arena. It really is incredible to see Ronny and Randolph down low, two towering options for our boys to dish into that result in close range lay-ins. With Biedrins on the bench, our game in the paint hasn't missed a beat.

Where our game in the paint failed, there lay Morrow, ending in 6-10 shooting and, for a good part of the game, the sole owner of our only long distance bucket.

Yea, as long as we're on the topic of he three, we might as well say it. We stunk it up from beyond. Three for thirteen is absolutely dismal. And the only thing worse than tanking from beyond is watching our opponents drill them in our faces, over and over again. Despite our grand showing on offense, when the other guys drain threes like that, there's no way you're widening the gap.

As long as we're talking about not being able to widen the gap, we might as well touch on the 76 points that the Kings scored in the first half. I know - I'm getting dangerously close to talking about that thing I swore I wouldn't bring up at the start of this recap. But damn man... 76 points?! Fine, I'll stay true to my word... let's move on to something more positive...

...like MONTA ELLIS. Holy crap. His performance last night was borderline epic. Netting a season high 42 points, Monta also brought in 9 dimes (some of them truly memorable), and 9 boards. He looked like.. well.. he looked like...

Gave us a little scare at the end there with his ankle though. I'll admit I was surprised to see him get up and get back into the game after that display. Well, at least he didn't get carried off of the court only to walk back into the game 10 minutes later. *cough* PAUL PIERCE! Sorry. That was uncalled for.

Overall, we pulled it off in an overtime that we should have never been in if only we had played a little defe- what's that? I said I wouldn't bring that up? Hang on let me read back a little bit...

Damn. Well let's just say OT could have been avoided.

But it was nice to get a win, wasn't it?

How can I not give this to Monta Ellis? He was a premiere point guard out there tonight, contributing in virtually every facet. Don't let this take away, however from the incredible game that Kelenna had last night. But Ellis takes the prize.