Share All sharing options for: Day 3 of the NBA 2k9 Playoffs

Day 2 of the NBA Playoffs was pretty much predictable for their outcomes...except one. 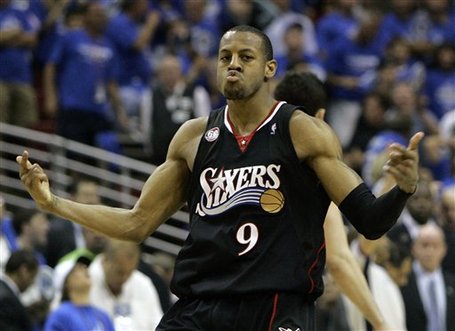 "It's cause I go to practice."

Jump for some quick thoughts about today's games.

Playoffs? Don't talk about playoffs! Are you kidding me? Playoffs?!?!

I might have to do that for every playoff game I cover this season.

Derrick Rose? REALLY? Who has that kind of monster playoff performance their first time out? Some guy named Kareem Abdul-Jabbar did way back in the day but beyond that, no one else. It looks like the loss of KG will really change things for the Celtics. Even though they are the defending champions, they still had trouble getting through the playoffs last year - they played full series against all of their opponents. If someone could stop Derrick Rose...they might pull through. Until then...

Ah jeez...I hate the Mavericks. I even hate to see something like this happen.

Saturday's win against the Spurs was the Dallas Mavericks first road playoff win in 3 years. Furthermore, the Mavs haven't lead a playoff series since they were in the NBA Finals in 2006.

Sure it's hard for the Spurs without Manu, but I think they can turn this around real quick. Matt Bonner played 18 minutes with 0 points. That's a HUGE problem. If they can get some good bench production from Drew Gooden, things will be pretty peachy for the Spurs.

Besides...they can always pull out Bruce Bowen in dire situations...

Post your Day 3 predictions and any ongoing game thoughts you have in the comments.