Share All sharing options for: Day 6 of the NBA 2k9 Playoffs 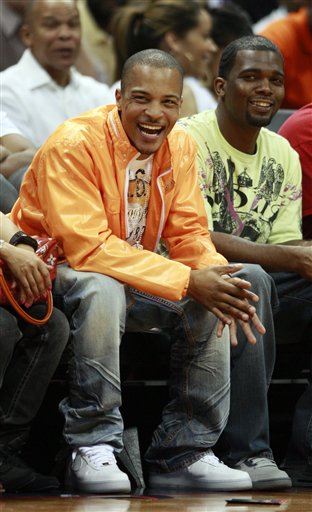 Even T.I. was laughing at Hash's silly predictions.

D-Wade is insane. 13 straight points at the end of the first half. 6 three pointers. (Same with Daequan cook) RIDICULOUS shots.

I think he put quite eloquently

"This is where amazing happens," Wade said.

With Defensive Player of the Year Dwight Howard fouling out after scoring 11 points and 10 boards, the Magic looked like they were back against the wall with another 76ers rally.

But the rookie Courtney Lee took charge of the game and helped the Magic survive after blowing an 18 point lead.

Boooooorrriiiiinngggg. This series is not what any of us hoped it to be, but I will say this - I am pretty happy the Chauncey Billups is tearing it up on his home city. In these two playoffs games, he's scored 67 points, made 12 three-pointers, 12 assists, and 0 turnovers. Gots to give this man his props.

That's kind of a weird way of putting it...

Playoffs? Don't talk about playoffs! Are you kidding me? Playoffs?!?!

Now Leon Powe is out? Man, the Celtics can't catch a break. It might be silly for KG to not get his surgery done and see if he can rehab his way back to playing this year. Too many injuries, too many old folks, too much Starbury = bad rest of the playoffs for the Celtics.

By the way, anyone notice the DeMarcus Nelson's now on the Bulls? Crazy!

Can you have negative respect for a player? Check out what Dubs fan favorite Erick Dampier said after their loss against the Spurs the other day

And he's not going to get fined for this stuff? What the? What a corrupt league...

I sure hope my man Tony P can tear it up again...in fact, posterize Dampier for me on time.

How bout I don't even waste my time talking about a series I don't care about. I hate both these teams and if this were McDonald's and I could have it my way, they'd both lose.

Although, if we take a look at what one Jazz player's thoughts

"The series is not over. They just did what they were supposed to do -- win at home," Utah point guard Deron Williams said. "Now we've got to do what we're supposed to do."

We can also see that there's something in the water of Salt Lake City that makes all of its residents a bit delusional.

Post your Day 6 predictions and any ongoing game thoughts you have in the comments.