Share All sharing options for: Day 11 of the NBA 2K9 Playoffs

They may have snuck on through to avoid the broom from L.A., but in the end it was nothing more than a moral victory. The Lakers are movin' on up to play the winner of the Portland/Houston series.

On the slightly more exciting end, looks like Atlanta really stepped it up in Miami to grab their first playoff road win in 12 years! With the series now tied at 2-2, the series that no one initially cared about is... um... still a series that no one really cares about. The eventual winner gets to move on to a mollywhopping by Lebron James and those other guys that wear the same outfit as him every game.

And then there was Denver versus New Orleans. Holy crap that was brutal. 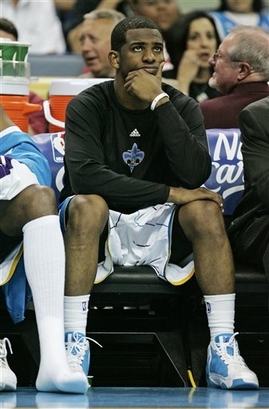 121 to 63?!!! Chalk it up in the record books as the greatest postseason beatdown. Ever. With this stomping, New Orleans has their back up against the wall, facing elimination in this now 3-1 series.

Hit the Jump to check the action on today's matchups!!

I'll tell you one thing - you can't really ask for more of an exciting series than this one. After their last double overtime matchup - it's fair to say that anything is possible here. In the end, I still think Boston is going to pull this series out - but clearly it isn't going to be without a fight!

Major props to Philly here. They're really giving the Magic a run for their money here. Unfortunately, tonight they go back to Orlando to try to take a lead in this series. I'm picking home court advantage on this matchup tonight,

As much as it pleases me that San Antonio is backed up against a wall, I don't see them going home from this series with just 1 win under their belt. Tonight TonyP fights back.

Is Houston going to close this one out and get some rest before getting trounced by the Lakers? I say no - purely because I think the NBA is going to want at least one more playoff game to sell ads for. Look for some crappy officiating here tonight!