In the Street Fighter series, the character of Oro is one of the most powerful fighters in the series. So deadly is his skill, he fights with one arm tied down so he doesn't accidentally kill his opponent.

I only need 1 arm to defeat you.

OK, so the Warriors aren't exactly the deadliest team in the NBA. But it sure felt like they were playing like a fighter using only one arm. They had already lost several major starters and supporters in Stephen Jackson, Andris Biedrins, Corey Maggette, Brandan Wright, and Marco Belinelli to injuries. Minutes before the game started, the Warriors also lost Monta due to his ankle injury from the Kings game.

So that left Azubuike, Randolph, Turiaf, Crawford, Morrow, Watson, and Kurz as healthy players. In other words, a couple of rookies, a couple of D-Leaguers, and a bench warmer. Meanwhile the Hornets had two all stars in Chris Paul and David West plus an experienced deadly shooter in Peja Stojakovic coming off the bench.

In the defensive end, the game plan was simple: Force Chris Paul into a shooter. Don't let him drive into the lane and dish off to his opponents for easy dunks or lay ins. Make CP3 uncomfortable by making him play around the outside. Make the rest of the team uncomfortable by doing something else because they can't wait for dishes from CP3.

In the first half, the Warriors played this defense wonderfully. CP3 was limited to only 3 assists while having 3 turnovers. That 1:1 ratio is pretty bad for CP3. He was also the only Hornet in double figures at the half. The Hornets looked worn out and out of rhythm most of the half.

Meanwhile the Warriors took advantage of this with some hot shooting from Crawford and a great performance from Morrow and Randolph and pushed the lead to 11 after the 1st quarter and finished the half leading by 9. 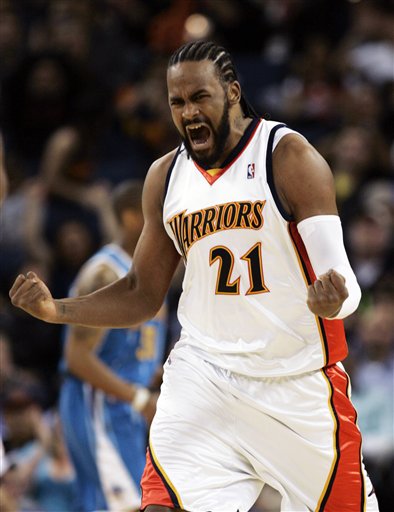 You would expect the Hornets to fight back after halftime, and they did that by tightening up the defense and double teaming out around the perimeter. This took the Warriors out of their shooting rhythm somewhat as their offense became a bit choppy in the third. The Hornet's David West started coming alive, being the second player to reach double figures. The Warrior defense held on, as they limited the scoring to only CP3 and West in the third. Nevertheless, by the end of 3, the lead had shrunk to just 3.

At three minutes into fourth quarter, the Hornets actually took the lead back at 78-77, and it appeared as though the Warriors would cough this one up. Instead, they scored 5 quick to retake the lead and never gave the lead back again.

The Warriors NEVER gave up tonight, despite being short handed. They played pretty good defense most of the time, nearly unselfish offense, and they closed the game convincingly. It was the best win of the season.

So how did our players do tonight? 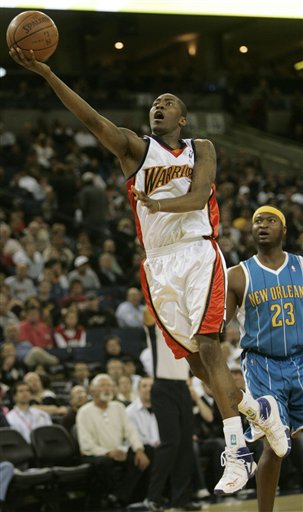 Why haven't we seen this before?

Jamal Crawford - Who is this guy?!? I've never seen him before! Without Monta on the floor, Crawford was THE guy. He didn't have to be a nice guy and defer to anyone. As a result, he played with a clear mind and focused purpose. He used his mad dribbling skills to get around his opponents and then DRIVE aggressively to the rim for a lay in or a sweet reverse. Where was this all season? He also hit his shots from three. He did NOT dribble-dribble-shot-clang. Well, maybe once or twice when the defense tightened up on him. He hit the closing free throws to seal the game. This was the best game I've seen him play.

Anthony Morrow - The Hornets got a taste of the true Morrow. Morrow played the well rounded game we all know by now. Super smooth shots from three, aggressively going for the rebounds and making a tip in, driving into the opponent's defensive holes right to the rim, and dishing it out to his teammates when they're open. There isn't a lot of bad things you can say about Morrow.

Anthony Randolph - He continued to play a controlled game, making smart moves like not forcing himself ahead on a fast break. Unfortunately I forgot what else he did earlier in the game because of his MISSED DUNK late in the game that would have surely put the game way. Hey Rookie, when the game is on the line, get the SURE two points! No showboating. He was beating himself up pretty hard, so I'm not going to pile on him.

Ronny Turiaf - Our best defender under the rim. He blocked a few shots and also had a monster jam from a pick and roll. An unsung hero.

CJ Watson - He did exactly what I expected him to do. He came in and hit a couple of reliable shots. Quietly helpful.

Rob Kurz - He actually wasn't completely useless tonight. He set a couple of nice screens, one which let Crawford walk home free into an easy lay up. The fact that Rob Kurz played a significant number of minutes and WE STILL WON adds insult to injury for the Hornets.

Kelenna Azubuike - What happened to you tonight? You were the Warrior Wart tonight. Well, I guess this added even MORE insult to injury, as we won despite a bad night from Azubuike. Perhaps he's playing hurt from the Kings game, so I'm not going to pile on him too much this time. He's usually been good for us.

Tough choice. For a short handed team, I don't think it's fair to pick only one guy. So a pair of A's with a J kicker is my hand. I'll take Anthony, Anthony, and Jamal. 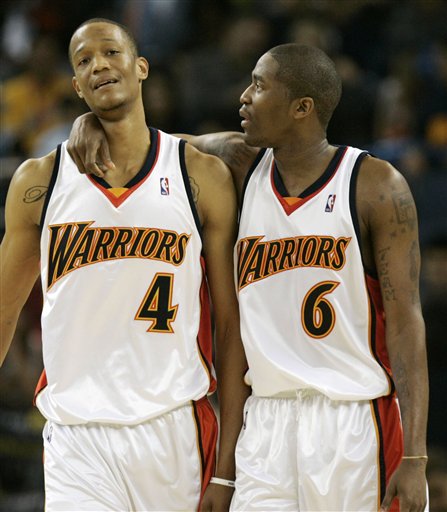 Sorry Morrow, I couldn't find a picture of you from this game.