Share All sharing options for: Day 25 of the NBA 2k9 Playoffs 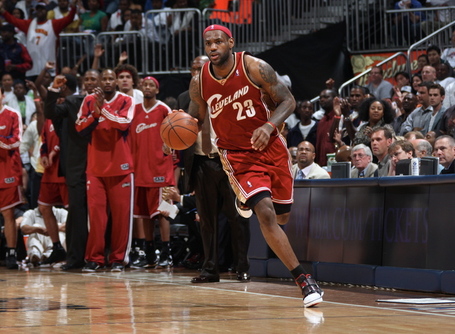 Another one falls victim to the LeBrons.

Props to the Cavs for finishing off the Hawks in 4 and getting through the first two rounds without a loss.  Are they...UNSTOPPABLE BABY?!?!

No, they'll lose at least one next round against the Celtics or the Magic.  But LeBron is making a great case for why he deserved to be MVP...

Even on an off-night for James, the Cavaliers manage to pull of a victory.

The Mavericks overcame a late 14 point deficit last night and walked away with the victory.  Didn't think they had it in em.  Here's what I did know the Mavs (and their fans) DID have in em

They’re upset with the way their families and friends were treated Monday night at American Airlines Center, where fans hurled insults at Kenyon Martin’s girlfriend, rap star Trina, and where Carmelo Anthony’s girlfriend, LaLa Vazquez of MTV fame, was removed from her seat by security guards for her safety.

Fans also got into shouting matches with Martin’s mother, who had extra protection around her after Mavericks owner Mark Cuban called her son a thug following the frenetic finish in Game 3.

Look, I'm all about representing for your team and cheering em on, but harassing the opposing team's friends and family?  That's a new low Dallas.  Here's to counting on a blowout in Game 5.

As much fun as I had with Glen Davis's celebration the other night, I hope I don't see that mess again.  Dwight Howard and Magic have lost their advantage now that the series is all tied up, but it's time to go back at shake up Boston.  In the words of Third Quarter Collapse, the Word of the Day is EXECUTE.

Aaron Brooks gave his mom a great Mother's Day present on Sunday.  He was huge in a game where Yao Ming had to sit out due to a stress fracture, and the Rockets pulled out a double-digit victory.  It's going to be tough this time around especially on the road, but I'll give it to the Rockets to pull of another upset.  This team is too quick for the likes of Derek Fisher...