Share All sharing options for: RUMOR: Clippers to offer Warriors Baron Davis for Corey Maggette if they land Ricky Rubio in 2009 NBA Draft

If the Warriors Bring Back Baron, can WE BELIEVE be resurrected? 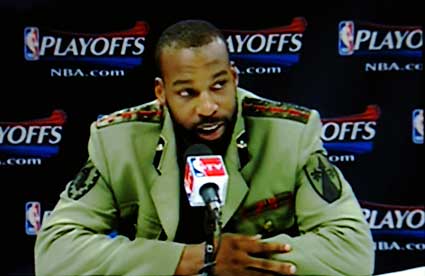 The details via ESPN.com's draft guru Chad Ford after the jump.

SAN FRANCISCO -- I talked to one NBA executive in Los Angeles on Tuesday who said it wouldn't be a surprise to see the Clippers reoffer Baron Davis to the Warriors for Corey Maggette if the Clips can land Ricky Rubio in the draft. The Clippers are big fans of Rubio, and obviously they can't play him with Davis.

The Warriors turned down similar overtures at the trade deadline, but they might want to reconsider. With a healthy Davis, they would be a playoff team. But as of now, they lack a regular point guard and look as if they could be making another trip to the lottery.

My opinion hasn't changed since word broke that the Warriors rejected a buyers remorse swap of Baron Davis for Corey Maggette and Marcus Williams at the trading deadline this past season. If the Warriors can move an injury prone, big time scoring 6th man and a bench player (obviously no Andris Biedrins, Anthony Randolph, or Monta Ellis) for an injury prone, All-NBA quality point guard, it has to be done. It's arguable whether BD has it in him to return to his 2006 and 2007 quality of play, but it's not like the Warriors would be giving up all that much to find out.

But what do I know? You're better off consulting with my colleague ClipperSteve over at the superb Clips Nation. By day he drops science on the Clippers. By night he's on SportsCenter.

My partner in crime Fantasy Junkie was on point when he broke this down way back in July 2008 while recapping free agency 2008 for the Warriors:

1) Corey Maggette: 5 years, $50 million
He's a very nice scorer and can get to the line better than any of the current Warriors. He'll fit in offensively, but he plays, at best, average defense. His body looks strong enough to grab more rebounds than he actually does. He better pick up that rebounding average to play on this team. I really like the signing at 6 or 7 million per season, but at $10 million per? I'll pass. Let him go back to the Clips or sign with a contender for the mid-level.

Oh and did I mention he's injury prone? He's never played a full season. The most games he's played was 77 and that was his rookie year in Orlando. So let me get this straight, Mullin doesn't want to extend Baron for 5 years because he's injury prone, but will sign Maggette for 5 years at $3 million less per year than Baron?

Let's not forget how Baron CARRIES this team. That's certainly worth $3 million more per year. Without a playmaker, I'm afraid of what will happen.

Like I said in the Maggette portion, Baron is worth $13 per year for 5 years if Maggette is worth $10 per year for 5 years. If we're just going to throw money around, let's at least throw it at a star. So from my rudimentary mathematical skills, here's what I get. Maggette + Turiaf for 4 years on average will be $14 million per year and then an extra Maggette year at $10 million more. I know the Maggette number will not start at $10 and will increase each year, but whatever it's close enough for comparisons sake. Baron Davis for 5 years will cost $13 million per year. Mullin and co are telling me that Maggette and Turiaf are worth more than Baron? Hell no. I'm sorry that doesn't fly with me. If you were to offer me Baron Davis and $1 million for Maggette and Turiaf in a trade, I would jumping for joy.

So unless, these are stepping stones to a future bigger move, I'm not looking forward to this season. We just added a bunch of salary and we're in worse shape than we were last season. Unless Mullin has a grand scheme that we're not all privy to, color me skeptical and a disappointed Warrior fan.

But I guess anyone could have predicted that, right?

Hey maybe the Warriors can send Jamal Crawford and Brandan Wright to the Suns for Jason Richardson while they're at it? 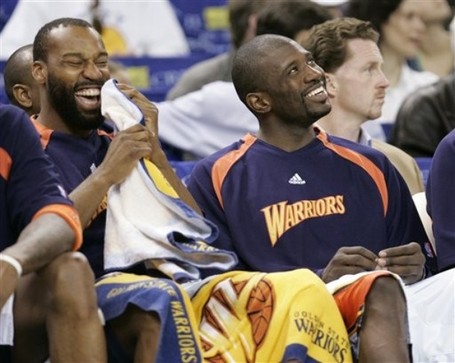 WE BELIEVE this was A Great Time out!

Thanks to dungeness crabdribble for the FanShot > Link.