fter the lottery show ESPN's Chad Frod released his Mock Draft (1.0) and with in it he had the Warriors selecting Brandon Jennings PG from Lottomatica Roma. 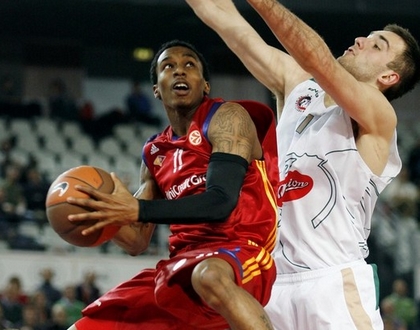 Drafting Jennings would be a swing for the fences by a team lacking a traditional point guard. He wasn't great in Italy this year, but he has all the raw tools to be a terrific backcourt mate for Monta Ellis for years to come. - Ford

As we all know, Jennings has been toilling away over in Europe playing a limited number of minutes and in recent weeks riding the pine during Lottomatica Roma's playoff run. For those interested, Draft Express has a stats page on Jennings with his numbers from Europe.

Not quite the stellar numbers you'd expect. However, the guys is a very gifted passer and as DX reported he's matured tremendously over the course of the season for Roma. For my book seeing is believing when it comes to NBA prospects and since there aren't any great statistical metrics on measuring guys stats from Europe then, I guess this is the best we have go on

Here's a clip of Jennings in red

Finally, here's a clip of Rubio and Jennings from their SLAM cover shoot